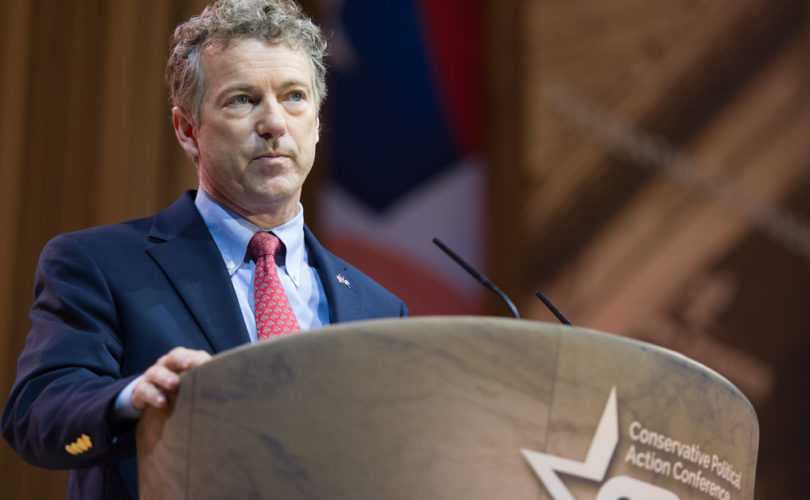 PHILADELPHIA, PA, May 19, 2015 (LifeSiteNews.com) – Rand Paul wants to be president – but abortion is less of an issue for him than the national debt, the senator said yesterday.

Paul had completed a campaign stop at Philadelphia's National Constitution Center, where he attacked both Bill and Hillary Clinton with relish, when a local media personality asked him about abortion.

“I will answer the question as honestly as I can,” he said. “I didn’t run for office because of this issue. It wasn’t what got me to leave my practice” to enter politics.

Instead, it was the nation's ballooning debt that made the younger Paul run for the open Senate seat in Kentucky.

The national debt has exploded from less than $1 trillion in 1980 to a staggering $18 trillion and climbing. President Obama, whose annual deficits have exceeded $1 trillion, has added more to the debt than every president from George Washington to Bill Clinton combined.

Pressed on abortion, Paul told the audience that, under the Constitution's federalist principles, abortion would be handled “best by the states.” Conservative jurists have debated whether the Constitution gives the federal government the right to regulate abortion.

To make national policy, the nation needs to decide “when life begins,” he said, according to The Daily Caller. “I think we go down all kinds of rabbit holes talking about other stuff.”

He referenced his own history as an ophthalmologist who treated premature newborns. “If someone were to hurt that one-pound baby in the neonatal nursery, it’s a problem. That baby has rights,” he said. “But we somewhat inconsistently say that seven-pound baby at birth or just before birth has no rights.”

His remarks echoed his rejoinder to a reporter last month to ask Democratic National Committee chair Debbie Wasserman Schultz, “Is it OK to kill a seven-pound baby in the uterus?” Congresswoman Schultz replied that there should be no legal restrictions on late-term abortion. The Democratic Party platform currently calls for taxpayer-funded abortion through all nine months of pregnancy.

Deciding when Constitutional protections and the right to life apply is the key goal to advancing pro-life legislation, Paul said yesterday.

“We just have to figure when we agree life begins,” he concluded.

The first-term senator, who will also run for re-election in Kentucky next year, has a strong pro-life voting record – as strong as anyone can in a chamber where pro-life legislation was bottled by former Majority Leader Harry Reid until this year. In 2013, he introduced the Life Begins at Conception Act.

The previous year, he had been stopped by TSA agents while en route to address the annual March for Life. “I don’t think a civilization can long endure that does not have respect for all human life – born and not yet born,” he has said.

He has, however, said he supports the use of Plan B, a potentially abortifacient method of “emergency contraception,” as birth control.

His concern over the proper role of the government under an originalist reading of the Constitution has caused Paul, an outspoken personal supporter of life and marriage, to question whether the government should withdraw from marriage contracts and establish alternate legal arrangements.

Framed by Independence Hall, Paul touted his libertarian credentials as someone who could attract unconventional support to the Republican ticket, including minorities who support his opposition to militarizing local police forces. Such opposition exploded in the city during riots in nearby Baltimore.

“I see no reason why a 20-ton mine resistant ambush protection vehicle should ever roll down any city in our country,” he said on Monday. “There is no reason that the police force should be the same as the army.”

Paul also stated he would oppose reauthorization of the Patriot Act, although he conceded the votes did not exist to impeded final passage.

He was particularly incensed over the NSA's broad interception of phone calls without a warrant.

“That's what we fought the Revolution over!” he said. “Our Founding Fathers would be appalled to know that we are writing one single warrant and collecting everyone's phone records all the time.”