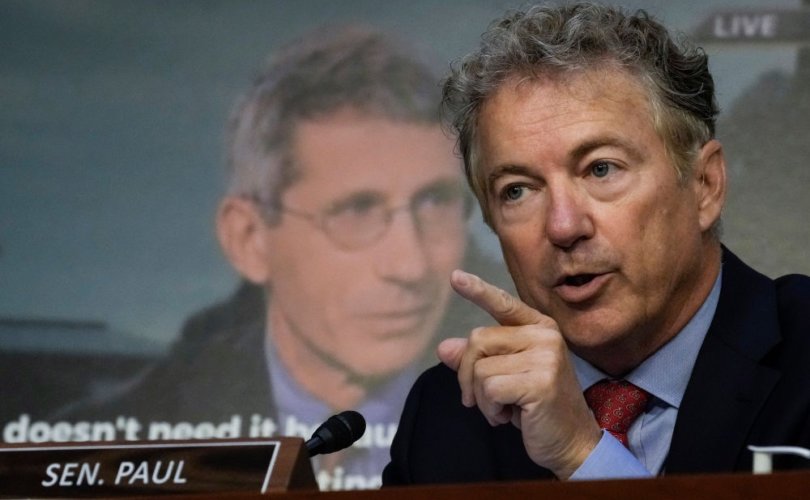 Sen. Paul made the remarks in an interview with Fox Business host Lisa Kennedy, during which he suggested that Dr. Fauci is helping conceal the pandemic’s origins in a bid to obscure his involvement in funding risky “gain-of-function” virus research in China.

According to Paul, if the COVID-19 virus “came from a lab, the fact that [Fauci] approved the research and funded the lab would draw culpability to himself, culpability to the [National Institutes of Health], culpability to all of these people who made the unwise decision to send money to China to do dangerous research.”

The Kentucky senator referred to emails sent by scientists to Fauci and others in the early days of the outbreak suggesting that they believed the virus had been manipulated in a lab.

“So all kinds of alarms and bells went off for a day or two,” Paul said, adding that subsequent communications between NIH director Dr. Francis Collins and outgoing National Institute of Allergy and Infectious Diseases (NIAID) director Dr. Fauci tell a different story.

RELATED: ‘I created it’: Fauci jokes about producing COVID in his kitchen

Paul said Fauci and Collins concurred that the lab-leak theory was “damaging to ‘science’ and to NIH and to all this taxpayer money we get, and also to themselves personally, so they began a cover up.”

“I think it’s the biggest cover up, probably, in the history of science,” Sen. Paul said. “And we will get to the bottom of this.”

Paul promised that after a Republican win in the November midterms, he will require Fauci to testify under oath regarding the alleged cover up.

Allegations that the NIH may have financially backed research resulting in the creation of the COVID-19 virus traces back to NIH grants awarded to American non-profit EcoHealth Alliance, which collaborated closely with researchers at the Wuhan Institute of Virology over a span of years to study how bat coronaviruses could jump to human subjects.

In 2013, EcoHealth reported it had discovered a new SARS-like coronavirus in Chinese horseshoe bats and had subsequently “isolated and cultured a live virus that binds to the human SARS receptor ACE2 and can therefore be transmitted directly from bats to people.”

The nature and extent of EcoHealth’s research was called into question after the COVID-19 pandemic struck in early 2020. While speculation over coronavirus being man-made was shot down as misinformation in the early days of the pandemic, by mid-2021 even mainstream outlets began to acknowledge the possibility.

For his part, Sen. Paul has repeatedly pressed Fauci to state whether or not the U.S. government funded the dangerous so-called gain-of-function research.

Last year, Paul submitted a criminal referral with the Department of Justice arguing that Fauci lied to Congress when he claimed that the NIH was not funding and had never funded gain-of-function research in Wuhan, China.

In a congressional hearing ahead of Paul’s criminal referral submission, the Republican senator told Fauci that “we don’t know that [COVID-19] didn’t come from the lab,” and that “all the evidence is pointing that it came from the lab, and there will be responsibility for those who funded the lab, including yourself.”

Earlier this month, former EcoHealth VP Andrew Huff said in a sworn statement that SARS-CoV-2, the virus that causes COVID-19, had indeed been created in a lab and funded by the U.S. government.