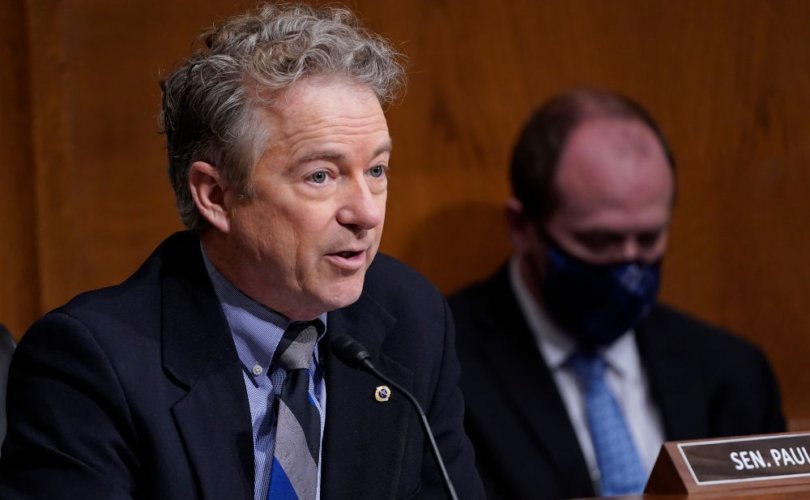 WASHINGTON, D.C. (LifeSiteNews) — A Republican U.S. senator announced that he will no longer post content on YouTube, comparing it to the end of a “toxic relationship.”

“Every year, people resolve to do things that are better for their health — quitting alcohol, processed food, toxic relationships,” Sen. Rand Paul wrote in the Washington Examiner on Monday. “I have come to the realization that my relationship with YouTube is dysfunctional.”

“I will no longer post videos on YouTube unless it is to criticize them or announce that viewers can see my content on rumble.com,” he wrote. “Why begin with YouTube? Because they’re the worst censors.” The Kentucky Republican also encouraged people to join libertytree.com, a website he created to aggregate right-leaning content.

“Any time I state that cloth masks do not stop the virus from spreading, as in this Denmark study, Florida school comparison, and Vietnamese study, YouTube deletes the video,” Sen. Paul said. “I always cite studies and scientific sources such as those listed here, but instead of allowing free and open debate with others who might argue flaws in those studies or cite opposing ones, YouTube simply silences me.”

The Republican senator said that he believes Big Tech companies should be allowed to censor views because they are private businesses. He said that the solution is more competition.

However, in January 2021, Amazon Web Services revoked its contract with Twitter alternative Parler, and the Apple App Store and Google banned the social media app. Parler had to restrict content on its app in order to appease Apple and return to its app store.

“While obnoxious, arrogant, and closed-minded, the CEO of Twitter is correct: The first amendment applies to the government, not to private business,” the Kentucky senator said. “But just because private censorship of speech is allowable under the law, that doesn’t make that censorship any less despicable or illiberal. Facebook, YouTube, Twitter, and Instagram are the new town square, and opposing viewpoints are being silenced by the BigTech gatekeepers.”

Paul is not the only Republican U.S. senator to face censorship from YouTube for sharing views about COVID.

Wisconsin Sen. Ron Johnson had video from an official Senate hearing removed by YouTube in early 2021.

The video included testimony from a medical doctor who recommended, based on evidence, that ivermectin could be an effective part of a COVID treatment regimen.

Republican U.S. Rep. Marjorie Taylor Greene of Georgia also had her Twitter account permanently suspended this week after posting a thread about how the medical establishment and political leaders had responded to COVID in a way not seen with previous diseases.

She posted a series of tweets on January 2 about COVID, the shots, testing, and the likelihood of dying from the disease. The archived set of social media posts can be read here.

“Before Covid, Treatment for virus/disease used facts/data to treat & protect the vulnerable,” one tweet said. “After Covid, Government mandates unnecessary vaccines for low risk people. Knowing 90% of deaths are 50+ and w/ obesity, diabetes, and heart conditions, the Gov ignores treatments.”

She previously received a “strike” for saying that obesity makes someone at a higher risk of hospitalization from COVID, according to The Hill. She said COVID is “not dangerous” for someone who is not obese, The Hill said. That was called “misleading information.”

Her claim is supported by data from a leading American medical institution, Johns Hopkins University. Its own mortality analyses of COVID says that across all age groups, underlying conditions and other factors, 98.5% of people who contract COVID will survive it.