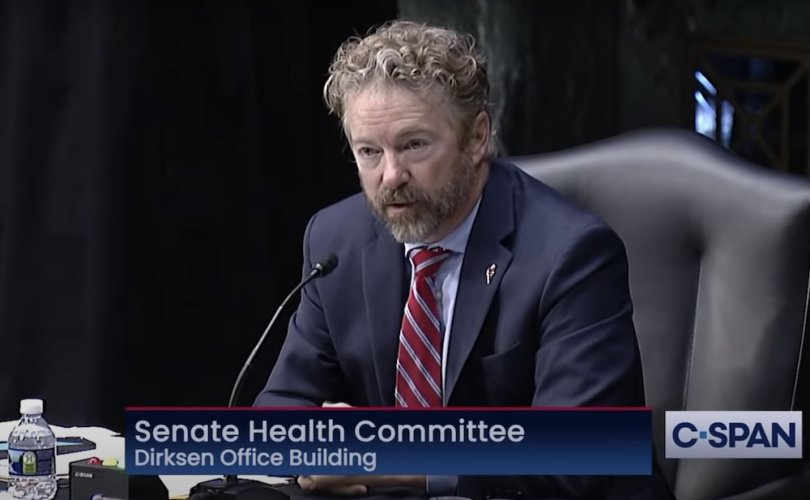 WASHINGTON, D.C., May 14, 2020 (LifeSiteNews) – Republican Sen. Rand Paul of Kentucky had some tough words Tuesday for the top infectious disease expert advising the Trump administration’s response to the coronavirus outbreak, questioning why so much decision-making has seemingly been delegated to Dr. Anthony Fauci.

Fauci, director of the National Institute of Allergy and Infectious Diseases, appeared via teleconference before a hearing of the Senate Health Committee.

“The history of this will be wrong prediction after wrong prediction after wrong prediction,” said Paul, who is an ophthalmologist as well as the only senator confirmed to have had the coronavirus. “I think we ought to have a little bit of humility in our belief that we know what's best for the economy, and as much as I respect you, Dr. Fauci, I don't think you're the end-all. I don't think you're the one person that gets to make the decision,” about when schools and businesses may reopen.

Paul expressed particular concern for the danger that, “if we keep kids out of school for another year, what's going to happen is the poor and underprivileged kids who don't have a parent that's able to teach them at home are not going to learn for a full year.”

“I have never made myself out to be the end all,” Fauci responded. “I'm a scientist, a physician, and a public health official; I give advice, according to the best scientific evidence.”

“I don't give advice about economic things [or] anything other than public health,” he said. He added that he didn’t want to be “cavalier in thinking that children are completely immune to the deleterious effects” of the coronavirus.

During Fauci’s tenure advising President Donald Trump, critics have raised concerns over several of his public comments, from suggesting the possibility of requiring Americans to carry “certificates” documenting their immunity to COVID-19, to implying that the public might have to wait for a vaccine to be developed, tested, and released before regaining their freedoms.

Fauci has also called for the practice of handshaking to be abolished but says sex with strangers remains alright if “you’re willing to take a risk.”

“It depends on the level of the interaction that you want to have,” Fauci said when asked about sex hookups via the dating apps Tinder, Bumble, and Grindr. “If you’re looking for a friend, sit in a room and put a mask on, and you know, chat a bit. If you want to go a little bit more intimate, well, then that’s your choice regarding a risk.”

Acting on Fauci’s advice, Trump has been generally supportive of locking down, but in recent days has been leaning more strongly in the direction of reopening, last week rejecting proposed reopening guidelines from the U.S. Centers for Disease Control (CDC) on the grounds that they imposed too many conditions on states and individual liberty, and could do further damage to the economy.

As of May 13, the United States is estimated to have seen 1,411,370 cases of the coronavirus, with 83,567 deaths and 298,643 recoveries, although mounting evidence suggests far more of the public has contracted and recovered from the virus than the official count indicates. At the same time, state bans on “non-essential” activity across the country have caused massive job losses, with more than 33 million Americans filing for unemployment and studies predicting that tens of thousands of small businesses that have closed down will never reopen.

Other medical experts argue that the evidence warrants a strategy more narrowly targeted toward protecting the elderly and immunocompromised while allowing the younger and healthier to go about their lives. “If we focus on the elderly, we will bring a death rate that is likely no more than 1% down to fractions of a percent,” says Dr. Donald Yealy, chair of emergency medicine at the University of Pittsburgh Medical Center.