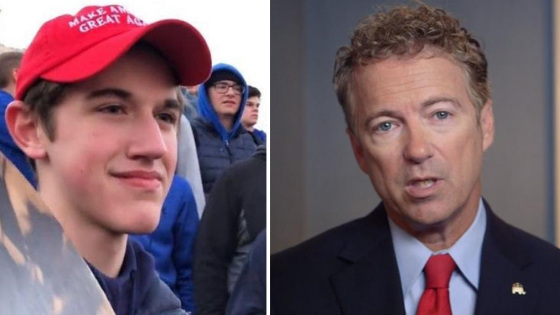 January 21, 2019 (LifeSiteNews) – Sen. Rand Paul and Rep. Thomas Massie, both from Kentucky, have tweeted their support of the Covington Catholic High School students who were smeared by the media and many conservatives and liberals over a partial video of them after the March for Life.

“Far from engaging in racially motivated harassment, the group of mostly white, MAGA-hat-wearing male teenagers remained relatively calm and restrained despite being subjected to incessant racist, homophobic, and bigoted verbal abuse by members of the bizarre religious sect Black Hebrew Israelites, who were lurking nearby,” Reason noted.

“The honorable and tolerant students of Covington Catholic School came to DC to advocate for the unborn and to learn about our nation’s [capital],” tweeted Rep. Massie, who represents the congressional district in which Covington Catholic is located. “What they got was a brutal lesson in the unjust court of public opinion and social media mobs.”

“I’ve now watched over an hour of other videos from 4 different cameras of the incident in front of the Lincoln Memorial. I urge everyone to watch the other videos before passing judgement. Would you have remained that composed at that age under those circumstances?” he asked.

Sen. Paul tweeted a link to Reason’s piece on the incident, which detailed how the media wildly misportrayed the encounter.

“Unfortunately there is too often a rush to judgement from our media and social media these days,” the former presidential candidate tweeted. “We should stop and look at the facts first.”

Sen. Paul also urged his twitter followers to read Rep. Massie’s take, noting, “These kids are taking all sorts of abuse they do not deserve.”