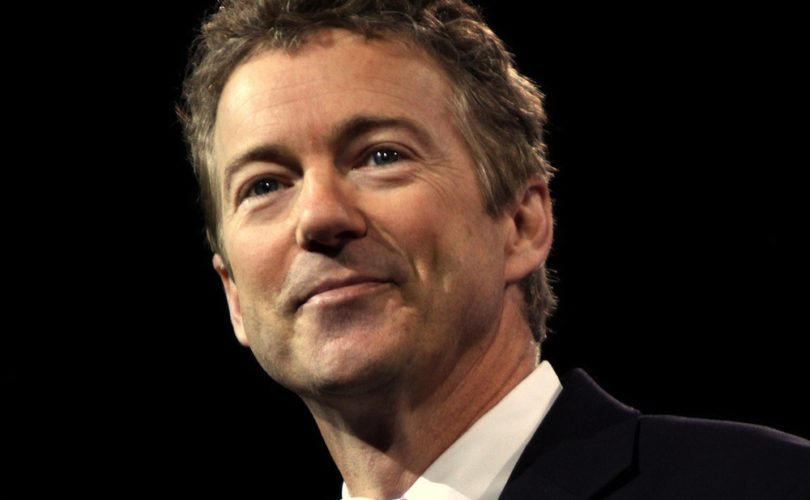 “It's been an incredible honor to run a principled campaign for the White House,” he announced. “Today, I will end where I began, ready and willing to fight for the cause of Liberty” – the word liberty always capitalized in his press release.

Paul, who turned 53 this month, has been a consistent voice for life in the U.S. Senate, working behind the scenes with fellow Kentucky Senator Mitch McConnell to arrange a vote to defund Planned Parenthood. Last month, he introduced the Life at Conception Act to grant protection under federal law to babies from the moment of conception.

His twin focuses on life and constitutional liberty met four years ago, when he was prevented from speaking to the 2012 March for Life when he was detained by TSA agents for refusing to a patdown.

However, his commitments to the right to life and constitutional order sometimes complicated his message. When asked at the most recent GOP debate if he favored a federal law protecting life or allowing states to make their own abortion laws, he replied “both.”

“For the most part, these issues would be left back to the states,” he said, but “there might be an occasion” when the federal government moves to protect life.

Reagan biographer Craig Shirley, chairman of Citizens for the Republic, called Sen. Paul “one of the most intellectually stimulating candidates of 2016.”

“Senator Rand Paul injected some very important issues into this presidential campaign, such as the balance between freedom and security and the overreach of NSA wiretapping,” he said.

Some in his libertarian-leaning orbit criticized the senator for trying to appeal to unconventional voter blocs for a Republican, such as minorities on sentencing reform and restoring the right to vote to convicted felons.

“He muddled on his message, tried to get the Left, and I told him it would backfire,” Drew Ivers, who led Ron Paul's Iowa campaign but did not endorse Rand Paul, told The Washington Post. “I just saw someone trying to do too much and be too many things to too many people.”

Like his father, Rand Paul maintained a strong emphasis on youth and education on America's founding principles.

In a farewell statement, Sen. Paul saluted the “thousands upon thousands of young people [who] flocked to our message of limited government, privacy, criminal justice reform, and a reasonable foreign policy. Brushfires of Liberty were ignited, and those will carry on, as will I.”

After being elected to the U.S. Senate during the Tea Party landslide of 2010, he chose to seek the Republican presidential nomination and re-election to Congress at the same time – a route not chosen by rival Marco Rubio.

“Although, today I will suspend my campaign for president, the fight is far from over,” Sen. Paul said today.

He promised to “continue to carry the torch for Liberty in the United States Senate, and I look forward to earning the privilege to represent the people of Kentucky for another term.”

Rand Paul: I entered politics to tackle the national debt, not abortion