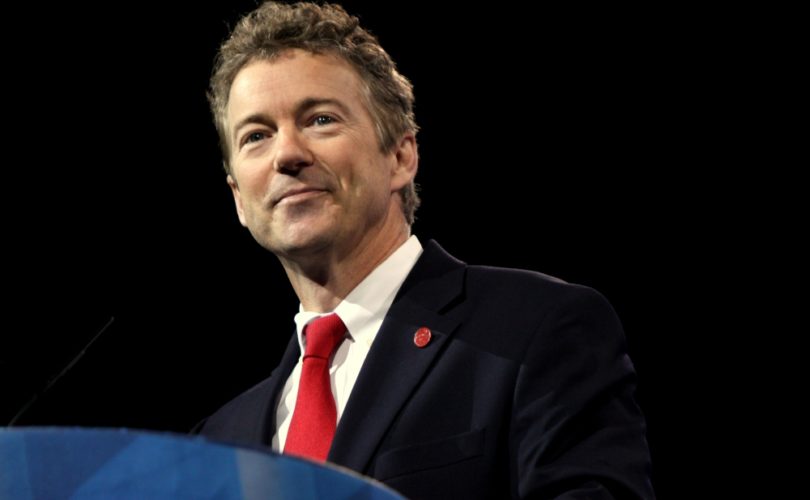 BOWLING Green, Kentucky, July 3, 2018 (LifeSiteNews) — U.S. Senator Rand Paul expressed gratitude to the Capitol Hill Police for arresting a man who allegedly threatened to murder the Kentucky senator and his family with an ax.

Paul discussed the threat publicly at an event Monday in the western Kentucky town of Leitchfield.

“The Capitol Hill Police issued an arrest warrant,” he said. “This man had threatened to kill me and chop up my family with an ax.”

Paul criticized the violent attacks upon Republican members of Congress in the last year.

“It's just horrendous that we’re having to deal with things like this,” Paul stated.

“That on top of being attacked personally, and having a very serious, life-threatening attack on my person,” he added, “and then being shot at, I’ve had a year where it’s becoming more and more aware that we have these real threats out there.”

The man reportedly called the threats in to Paul's Bowling Green, Kentucky, office.

Capitol Police declined to comment because the investigation is ongoing, the Louisville Courier-Journal reported.

Paul expressed thanks to the Capitol Police on Monday via Twitter, saying:

Thank you to the US Capitol Police for their arrest of the man who recently threatened to kill my family and me.

The reported threat follows violence targeting Paul and other GOP members of Congress in the last year.

In November, Paul’s neighbor, Rene Boucher, tackled the Republican lawmaker while he was mowing the lawn at his Bowling Green home. Paul suffered six broken ribs and a pleural effusion, or a build-up of excess fluid between the layers of the pleura outside the lungs.

Boucher, 59, a retired doctor and registered Democrat, has denied the attack was politically motivated, saying it was over a dispute involving lawn debris.

He pleaded guilty to the assault, paid a fine and was sentenced to 30 days in prison.

Paul is appealing the sentence in federal court and has filed a civil suit seeking medical costs and attorney fees relating to the attack. Boucher filed a motion to dismiss Paul’s civil suit and a countersuit.

Paul was also on the diamond when James Hodgkinson opened fire last June and shot several Republican congressional staffers along with Rep. Steve Scalise of Louisiana.

The GOP lawmakers and staffers were at a baseball practice in Alexandria, Virginia, for the annual Congressional Baseball Game when Hodgkinson approached asking whether it was Republicans or Democrats out on the field.

Rep. Mark Walker, R-North Carolina, had told NBC that it seemed the gunman “was there to kill as many Republican members as possible.”

Police on the scene said it was a deliberate attack.

Hodgkinson was killed after being shot by a member of Scalise’ security detail.

He had a list of Republican lawmakers’ names in his pocket when he conducted the attack, suggesting they were potential targets.

Members of an anti-Republican Facebook group of which he was a member and in which he regularly commented celebrated his violent attack against the Congressional Republicans.

While Paul was unhurt in the Hodgkinson attack, Scalise was gravely injured.

This has to stop. https://t.co/fohbyX6fwi

The alleged murder threat against Paul and his family comes after Rep. Maxine Waters, D-California, called for supporters to confront Trump officials wherever they go in public as part of recent backlash over immigration law enforcement.

Waters pressed people at a June 23 California protest where she also called for Trump’s impeachment to assemble a crowd when Trump cabinet members are sited, “push back” and tell them they’re not welcome anywhere.

“Let’s make sure we show up wherever we have to show up,” Waters said. “And if you see anybody from that cabinet in a restaurant, in a department store, at a gasoline station, you get out and you create a crowd, and you push back on them, and you tell them they’re not welcome anymore, anywhere.”

Waters was referencing earlier incidents where protesters drove Homeland Security Secretary Kirstjen Nielsen from a Washington, D.C., restaurant and White House Press Secretary Sarah Huckabee Sanders was asked to leave a Lexington, Virginia, restaurant by the owner because she worked for Trump.