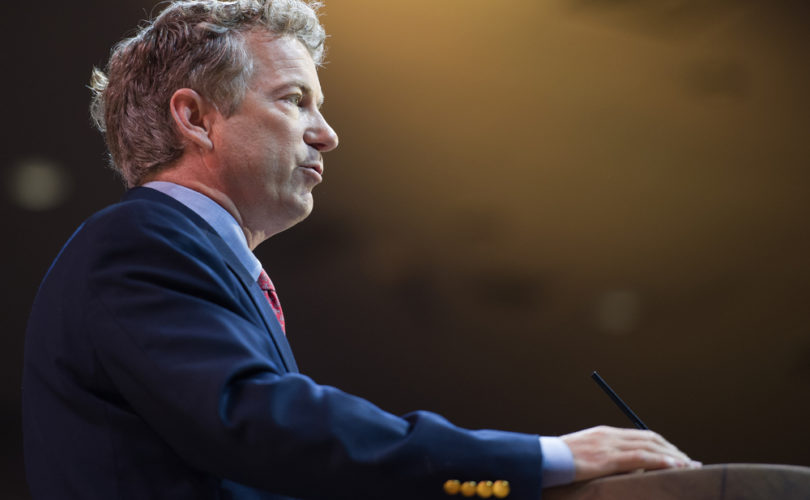 Speaking at a breakfast in Iowa, Kentucky Sen. Rand Paul said last week he supports marriage as the union of a man and a woman.

“I am in favor of traditional marriage, and I think that’s been the foundation for civilization for thousands of years,” he said in response to a question about whether he would support an amendment to the U.S. Constitution protecting marriage.

But while he said he favored the “concept,” he added he would oppose a federal amendment, because he does not believe the federal government should have a role in defining marriage. “I’d rather see it be a local issue, not a federal issue,” he said, acknowledging his views “may not please everybody.”

Paul had previously said that marriage was not a defining Republican issue, and members of the party could “agree to disagree” on the matter.

The junior senator from Kentucky, who is expected to formally enter the 2016 Republican presidential race after the midterm elections, also took the opportunity to throw cold water on Democratic claims that the GOP wants to outlaw contraception.

“I haven’t heard any Republican politician who” wants to “ban birth control,” he said.

“They concocted this whole thing in some Madison Avenue advertising agency that there’s a war on women,” he said, adding his stock joke, “If there was, women won.”

His remarks were a departure from his usual campaign fodder – an eclectic mix of libertarian-leaning issues including reducing the size and scope of the U.S. government, scaling back intervention abroad, restoring felon voting rights and reducing sentences for some drug convictions.

CNN reports that the Democratic National Committee cited Senator Paul's sponsorship of the “Life at Conception Act,” a bill that would endow all unborn children with rights under the 14th Amendment of the U.S. Constitution, as proof of his anti-contraception stance.

Neither the bill Sen. Paul supports nor the Personhood initiatives often associated with it would ban any device that merely prevents the conception of a child, nor do they mention birth control.