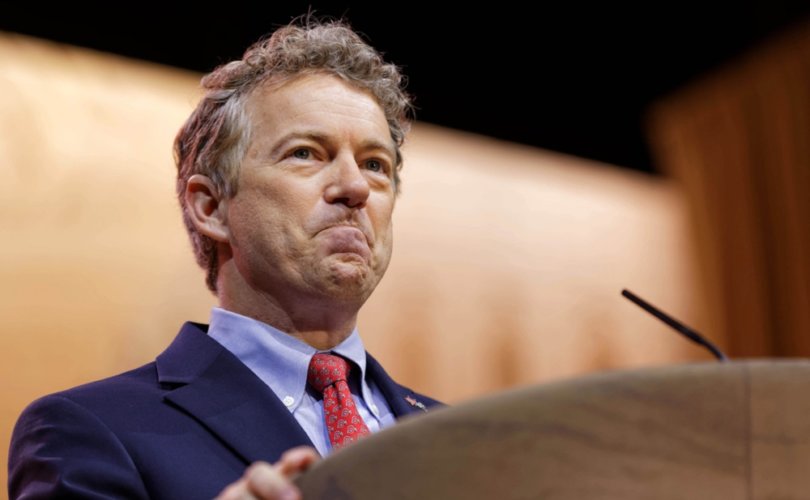 (The Daily Signal) – Sen. Rand Paul has sharply criticized the “politicized” FBI and the Department of Justice, calling for more whistleblowers to expose government trampling of American liberties.

“I think anytime someone is breaking the law in government, it’s a good idea to hear about it,” the Kentucky Republican said in a Thursday interview with The Daily Signal. “And so, frankly, yes, I think it is a good idea for people to reveal when the government’s breaking the rules.”

Paul’s remarks follow news that the head of the FBI’s Criminal and Counterterrorism divisions reportedly ordered agents Oct. 20 to identify threats against school board members and teachers with a “threat tag” — although Attorney General Merrick Garland told lawmakers the next day that the FBI was not using counterintelligence tools to target parents.

“I can’t imagine any circumstance in which the Patriot Act would be used in the circumstances of parents complaining about their children, nor can I imagine a circumstance where they would be labeled as domestic terrorism,” Garland said.

The attorney general had directed the Justice Department and the FBI in early October to investigate allegedly dangerous parents, prompted by a letter from the National School Boards Association, which had been in communication with the White House before the letter was sent.

“This should worry all of us,” Paul told The Daily Signal. “My father [former Rep. Ron Paul, R-Texas] warned about this 20 years ago.

“They also used it on President [Donald] Trump when he was running for office,” the Kentucky lawmaker added. “They used foreign-intelligence warrants to investigate his campaign, so this is really an abuse of the intelligence community.”

Paul also referred to Edward Snowden, a former contractor for the National Security Agency whose leaks of American intelligence secrets exposed that the NSA was conducting surveillance of Americans without warrants by scanning raw internet data.

“Even with the most famous whistleblower of all, Edward Snowden, when he released the warrant, it was a warrant for all of our phone calls, which is a generalized warrant and considered unconstitutional even back to Revolutionary times and before,” the senator continued.

“But he revealed that there was a warrant for Verizon, but not for a person, not for a drug dealer, not for a terrorist, for everybody that had a Verizon cellphone, and that’s the very definition of a generalized warrant.”

Paul said that while Snowden’s revelation “lost him his country,” referring to Snowden’s seeking asylum in Russia, it also provided valuable insight for lawmakers.

“And ultimately, we did strip a lot of the authority off them to record the metadata of our phone calls without a warrant,” he said. “That was stripped away, largely because we found out about it because of Edward Snowden.”

Paul, addressing what consequences Garland should face for seemingly misleading Congress about FBI investigations of parents protesting radical ideology in schools, said that lawmakers should not let people “go outside of the Constitution.”

“The Constitution protects us, the Fourth Amendment,” he said. “So if anybody wants to snoop on parents, they have to get a warrant from a judge, from a public judge who in a public court will have to defend this. You get a chance to defend yourself with an attorney.”

“The Fourth Amendment does protect us from unreasonable searches and unreasonable snooping or wiretapping, but a lot of this is done in an underhand way, not really obeying the Constitution, and the FBI has extraordinary powers to listen in on things,” he added.

“I’m incredibly concerned about speech, about parents’ rights, about family rights if the government is going after and attacking people who object to their kids being indoctrinated,” he said.