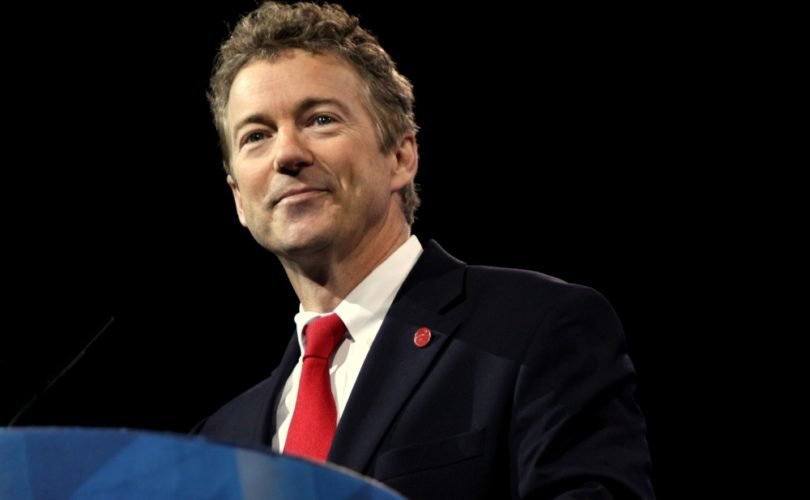 WASHINGTON, D.C., September 10, 2015 (LifeSiteNews) – Everything you've been told about defunding Planned Parenthood is wrong, according to Sen. Rand Paul.

Congressional Republican leaders and the mainstream media present the task of cutting off the abortion agency's funding as nearly impossible. But it could be done with one simple procedural maneuver, says the Kentucky Republican presidential candidate, who unveiled his plan at the D.C. pro-life event, “Women Betrayed: The Real Stories Rally and Lobby Day.”

“That gets it exactly wrong,” Sen. Paul told attendees. “You need 60 votes to affirmatively fund Planned Parenthood. So, don't accept the notion that we have to get to 60. The other side has to get to 60.”

“They do not have 60 votes to fund Planned Parenthood as long as we separate the bills,” he said.

“I think the country is coming in our direction. What we need is leadership in Washington. And we should demand nothing less than a separate vote” requiring Democrats to fund Planned Parenthood in a stand-alone bill.

“There has never been a better time. These horrific videos are making the country rethink this” issue, he said.

Then, if the government fails to be funded, the blame will rest with the president and Congressional Democrats, he said.

“If the Democrats want to shut down government…over spending money for harvesting organs from babies, so be it,” Sen. Paul said. “I, for one, will take a stand. I have never voted for any funds for Planned Parenthood, and I never will.”

Sarah Palin, the former governor and vice presidential candidate, who said she asked to attend at the last minute just because she wanted to “crash your party.”

Palin made an effort to “thank Sen. Rand Paul, because he's leading the charge” to see that binding measures are taken to deprive the abortion industry of its half-billion dollar annual subsidy.

“We just spoke a little bit ago about how nonsensical it is that there's even a fight about this on Capitol Hill,” Palin said. “Our tax dollars should not be going to such atrocities.”

Thanks in part to undercover investigations like those being carried out by the Center for Medical Progress and Lila Rose – who was in attendance – “more people consider themselves pro-life than ever before.”

“The will of the people is for respect for life to be made manifest,” Palin said.

Critics say that Planned Parenthood funding is not a line item. Instead the funds are embedded in numerous agencies, all of which would have to have their legislation revised in order to deprive Planned Parenthood of all federal funds.

However, since all spending bills must originate in the Republican-controlled House, Congressmen could introduce bills that allocate no funds for Planned Parenthood and force Democrats to try to amend the bills.

Senate Majority Leader Mitch McConnell has said such a task will have to wait until the nation elects a pro-life president.

But Rep. Tim Huelskamp, R-KS, replied that the last time Republicans controlled all three branches of government, under President George W. Bush, they failed to accomplish that goal.

“We had six years. They had six years,” Huelskamp said. But both parties allocated monies for Planned Parenthood “every year.” “The blame,” he said, “is on those who say they're pro-life” but do not vote their convictions.

Grassroots pro-life leaders promised to help whip up any flagging public support for the step, if Republican Congressional figures would move the necessary legislation.

“We're not asking for a government shutdown,” said Kristan Hawkins of Students for Life of America, the program's host. But we want leadership “to stand up and say no more — no more women who will be betrayed, no more children who will be ripped apart and sold for profit.”

If the Republican leadership will go to the bat, “we'll force the issue, and we'll talk about Planned Parenthood,” and “you know what? We'll win.”

If Planned Parenthood loses government funding, here’s a map of health clinics that could take its place