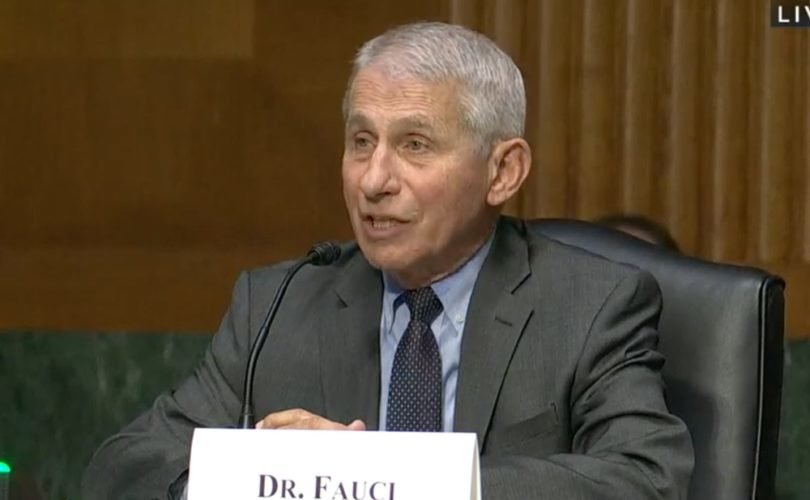 WASHINGTON (LifeSiteNews) — A prominent official with the National Institutes of Health (NIH) has admitted in writing that the United States government subsidized controversial gain-of-function virus research at the Wuhan Institute of Virology, contradicting a sworn denial from national COVID czar Dr. Anthony Fauci.

In a letter dated October 20, NIH Principal Deputy Director Lawrence Tabak confirmed to House Oversight Committee Ranking Member James Comer (R-KY) the existence of a “limited experiment” funded by a federal grant to EcoHealth Alliance, Inc., to determine whether “spike proteins from naturally occurring bat coronaviruses circulating in China were capable of binding to the human ACE2 receptor in a mouse model.”

Gain-of-function research is controversial because it entails intentionally strengthening viruses to better study their potential effects. Despite describing how it works, Tabak refrained from using the phrase “gain-of-function” and insisted that the bat coronaviruses studied by this experiment “are not and could not have become” COVID-19, due to the “sequences of the viruses [being] genetically very distant.”

July 28th NIH says “no NIAID funding was approved for Gain of Function research at the WIV.”

Obviously, they were lied to.

NIH confirmed today EcoHealth and the WIV conducted GOF research on bat coronaviruses.
@PeterDaszak with EcoHealth hid it from the USG. pic.twitter.com/Ou3ZLKto0L

He went on to shift the blame to EcoHealth for failing to promptly report findings that would have prompted a secondary NIH review, and claimed that EcoHealth has “five days from [October 20] to submit to NIH any and all unpublished data from the experiments and work conducted under this award.”

The letter comes as vindication for Sen. Rand Paul (R-KY), who in May confronted National Institute of Allergy & Infectious Diseases (NIAID) chief and White House COVID-19 adviser Fauci on the government’s support for gain-of-function research. Fauci, who in 2012 championed such research, told Paul NIAID had “never” done so. Paul cited the EcoHealth grant in response, at which point Fauci claimed that EcoHealth had assured them at the time that gain-of-function work would not be done with the money.

Paul, who in July submitted a criminal referral to the Justice Department against Fauci for lying to Congress, had a great deal to say on social media about the latest development:

But it is not “unexpected” that the virus gains in function it is simply ‘unknown'.

As Dr. Esvelt of MIT has written, “such research looks like a gamble that civilization can’t afford to risk.”https://t.co/nI3W6H2mbR

House Oversight Committee Republicans announced they “will be investigating,” as well.

While Tabak insisted that U.S.-funded gain-of-function research is not responsible for the global COVID-19 outbreak, Republican members of the House Intelligence Committee released in May a report finding “significant circumstantial evidence” that COVID-19 spread from a leak at the Wuhan lab, which remains particularly concerning in light of the knowledge that the research was conducted at that same lab. “The U.S. Government must also provide a full accounting of any American cooperation with the Wuhan lab’s coronavirus research, including the support of these projects through U.S. Government funds,” the report declared.

Fauci’s role in funding gain-of-function research is just one of several marks against the divisive public-health official, according to conservatives.

In February 2020 he said there was “absolutely no reason whatsoever to wear a mask” in the United States; by July, he was suggesting that Americans wear not only masks, but goggles and face shields, despite multiple studies indicating masks’ ineffectiveness. Critics also faulted Fauci for suggesting that handshaking should be abolished yet sex with strangers remains alright if “you’re willing to take a risk,” championing COVID vaccine mandates, and being unwilling or unable to give a “firm answer” on why the vaccines are necessary for those with immunity from prior infection.