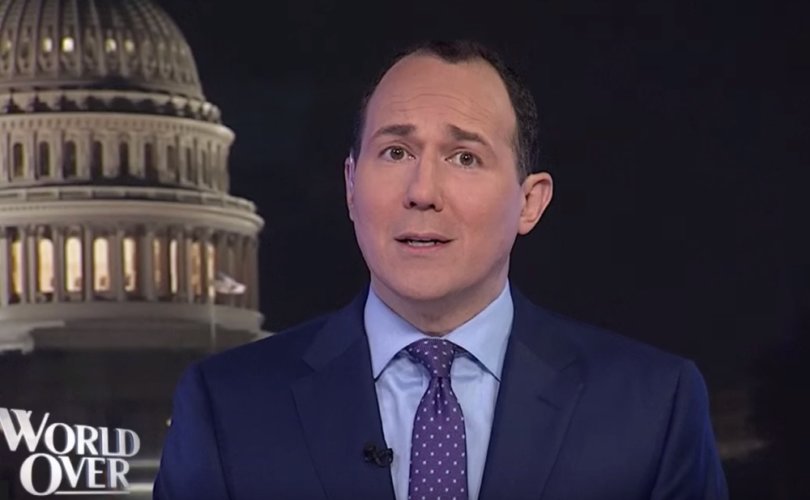 WASHINGTON, D.C., September 9, 2019 (LifeSiteNews) – EWTN’s Raymond Arroyo defended traditional American Catholics and their faithfulness to Church teaching in a blistering analysis of Pope Francis’ recent off-the-cuff remark, “It's an honor that Americans are attacking me.”

The Pope made his accusatory comment aboard the papal airplane on the way to Mozambique after being handed a copy of the new book How America Wanted to Change the Pope, by French journalist Nicholas Seneze.

On EWTN’s The World Over, Arroyo criticized the book’s premise that “an American cabal is determined to take down Pope Francis” – a premise with which the Pope apparently agrees.

“This is tired and, frankly, a fact-free narrative that we’ve heard mostly from European quarters and American progressives for years now,” declared Arroyo. “It is predicated on the idea that traditionally-minded American Catholics from columnists to bishops to cardinals to entrepreneurs – even media types, like this network – are bent on undermining the papacy of Pope Francis.”

Arroyo reminded his viewers of how two years ago, papal adviser Father Antonio Spadaro “sought to promote the fantasy that American Catholicism has been infected by an alliance with fundamentalist Protestants leading to what he called an ‘ecumenism of hate.’”

“Now papal biographer Austen Ivereigh is strumming that same chord in a forthcoming book titled Wounded Shepherd, which promotes the same foolishness that the Pope's reform agenda is under attack by well-financed traditionalists,” said the EWTN host.

These depictions “are factually and culturally misreading the situation,” said Arroyo, which end up “destroying or castigating or demonizing others.”

“They make the mistake of casting orthodox Catholics in America as right-wingers,  players in a political plot to undo the agenda of Francis.”

“The truth is much more simple,” noted Arroyo. “American Catholics actually believe what the Church has always taught and they are loud enough and have big enough platforms to broadcast that belief.”

These American Catholics “are pro-life, devotional,” and “they love the church and the Pope,” he added.

Arroyo described the “absurdist ‘guilt by association’ conspiracy theories” being promoted in the upper echelons of the Church as “laughable.”

“If this American cabal is so powerful and well-financed, why does it have absolutely nothing to show for its efforts?” asked Arroyo. “Near as I can tell the progressive winds are blowing pretty powerfully through Rome these days with appointments, cover-ups, synods going full steam ahead.”

And over the last few decades, those “progressive winds” of change have produced serious unintended consequences. Arroyo observed:

“Why is this happening?” he asked. “Certainly the sex abuse crisis and loss of trust is a huge factor, but so are things like belief in the Eucharist, marriage, a celibate clergy.”

“We must ask those questions and we will continue to do so,” he promised.

Arroyo believes traditional American Catholics are being demonized simply for asking important questions, by those who would like to silence them. “This is all a craven attempt to … purge voices from the Church who dare to question the radical changes underway and the brutal tactics used to enact [them].”

“Given the sexual and financial corruption in the church, it's incumbent upon all of us, laity and clergy, to ask questions and demand answers in love. That’s true mercy: Caring enough to ask the uncomfortable questions,” he said.

“If people wish to criticize traditional Catholics, have at it! They did it to Mother Angelica, John Paul II,  Benedict XVI,” exclaimed Arroyo. “But let's not demonize people for engaging in dialogue.”

“Let's not create silly conspiracy theories in an effort to dismiss their concerns or questions. Most of these traditional Catholics have deep reverence for the office and the person of the pope. And like the saints of old, they are, to the best of their ability, trying to keep him from making tragic mistakes or from being deceived by voices with their own agendas,” he added.