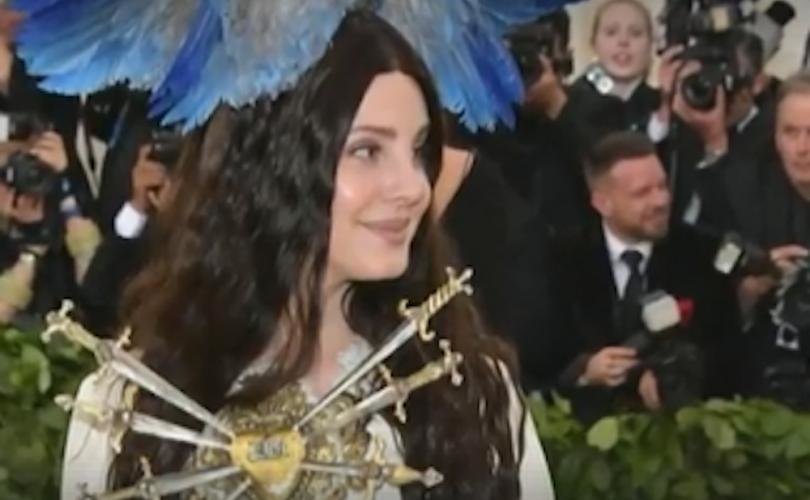 Lana Del Ray’s 'strange' Our Lady of Sorrows 'get-up' was 'a display that made some want to drive a sword through their own hearts,' EWTN's Raymond Arroyo said.

In a scorching commentary on The World Over, the close associate of Mother Angelica slammed the Vatican for seemingly giving its “imprimatur” to the event, saying the Church needs to do some “soul-searching” about whether it’s engaging the culture or just giving in to it.

“All I can say is the Church should have placed greater conditions and limits on the loan” of sacred vestments to the Met, he said.

“The Metropolitan used the collection as a jumping-off point to inspire contemporary designers to create their own costumes and gowns,” he said. “So a dalmatic of Pope Pius IX is presented with Coco Chanel and Versace’s. Along with a bizarre cross-studded bondage mask is a very low cut red gown. The juxtaposition and proximity is borderline sacrilege. To Catholics, these liturgical items point to a sacred reality: mainly, to Jesus Christ, truly present on the altar, which is the place these religious garments were meant to inhabit.”

“Taken out of that reality, sapped of their true meaning, they become over-the-top, operetic, brocade, and jeweled camp,” he said. It became a “silly masquerade,” he said, quipping that Lana Del Ray’s “strange” Our Lady of Sorrows “get-up” was “a display that made some want to drive a sword through their own hearts.”

“This is what comes of the Church treating its sacred vestments and articles like museum pieces,” Arroyo continued. “They only get trotted out by museums and no one knows quite what to make of them when they do.”

He also pointed out that none of the celebrities seemed to associate with Catholicism the blasé look preferred by so many elderly people and modern priests in the Church: “It didn’t surprise me at all that the Hollywood set avoided the polyester suits and the unadorned green vestments that have become deregure for most parishes today. Perhaps there’s a lesson in that.”

He questioned whether the Vatican really had no idea about the gala when it lent its sacred items.

“Surely their contacts in New York knew about this gala,” he said. “The Vatican allowed the Sistine Choir chapel to sing at the Met Gala. If the boys flew out of Italy, somebody had to know.”

“The Church needs to do some soul-searching, I think,” Arroyo said somberly. “Have an exhibit at a museum, sure, as has been done many times in the past. But to allow sacred items to be flanked by raunchy and at times campy knock-offs probably undercuts your message.”

“I’ve heard it said the exhibit and the Met Gala were meant to point people toward the good, the beautiful, and the true,” he said in what was possibly a subtle jab at Cardinal Timothy Dolan’s approving remarks at the gala. “But to the casual viewer, it’s hard to see beyond the garrish, narcissistic parade of decadence blocking the view.”