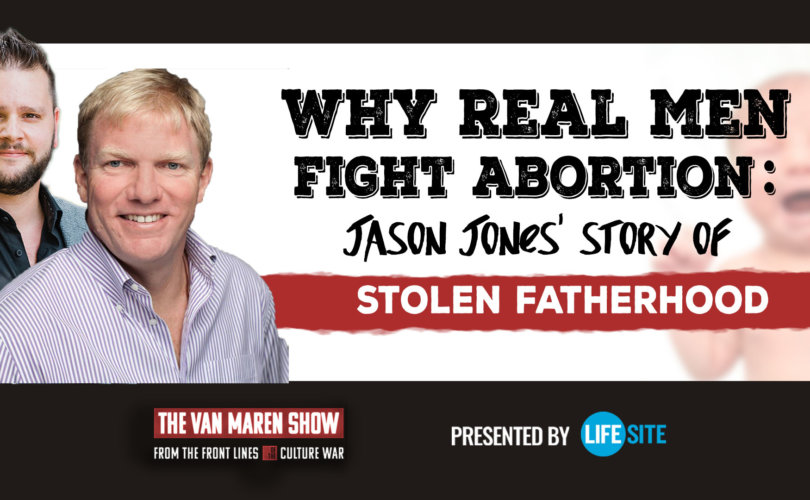 October 23, 2019 (LifeSiteNews) — Millions of men have been impacted by abortion. But not every one of them takes his experience and turns it into his life’s mission.

Jason Jones, producer of the pro-life movie Bella, told Jonathon van Maren on LifeSite's The Van Maren Show this week about the heartbreaking tragedy of losing his first daughter to abortion. His high school girlfriend’s father froced her to get an abortion while Jones was away at basic training, even though he fully intended support the child. “I exploded!” Jones shares. He goes on to say he didn’t even know that abortion was legal until he found out he had lost his child to abortion.

Jones was not the “typical” young man who finds out his high school girlfriend is pregnant; he was willing to take responsibility, make money, and care for her and the baby. This horrible experience propelled Jones into learning as much as he could about the pro-life movement and then getting actively involved.

In his early days of educating himself and getting involved, Jones was still an atheist. He was filled with passion, energy, and anger. His closest friends didn’t understand why he was so passionate, but it was the ’80s and ’90s, and no one was sharing his story. “It was weird. You’re not a Christian. You’re not a right-wing guy. We don’t understand this obsession of yours with abortion.”

As Jones was getting heavily involved in politics, media, and pro-life groups, Christians were trying to evangelize him. “I had this great fear of becoming a Christian, because I didn’t want my anger to go away, right?” At this time, he says, he’d seen a lot of people come and go inside the pro-life movement.

“I thought, if I become a Christian, I won’t be angry anymore. I’ll be lazy like all these Christians.” He goes on to say that even after he became a Christian, he was fearful that he would just quit and leave the pro-life movement because the anger that was driving him would be gone.

Instead of quitting, Jones said he “became cleaner.” His intensity didn’t diminish at all. In fact, he felt a little uncomfortable at pro-life events for a while. But eventually, he decided he just had to be himself. “Because that’s all I can do. Like me or don’t like me. That’s your business.”

That’s exactly what Jones encourages men to do: “be you and whoever you are as a man. There are a lot of ways to be manly.” He tells listeners that by being yourself, you’ll attract people into the movement. Jones shares about being on campus or going to pro-life events and making people feel uncomfortable. He said he landed on deciding not to care. He states that he pledged that for the rest of his life, he would get in between the violence and the vulnerable, especially vulnerable children in the womb.