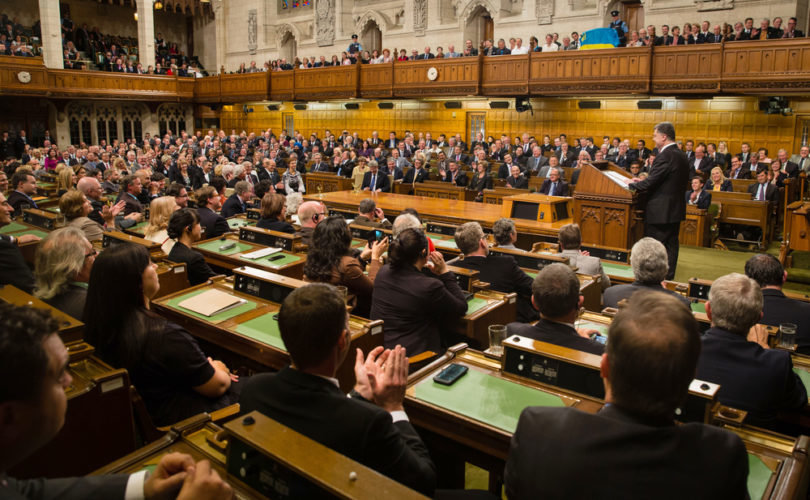 MPs sit in Canada's House of CommonsDrop of Light / Shutterstock.com

OTTAWA, August 24, 2016 (LifeSiteNews) — REAL Women of Canada has launched a petition calling on Parliament to counteract the “discrimination currently being experienced by Christians in Canada” and is gathering signatures for its September presentation in the House of Commons.

The petition asks the government “to permit Christians to robustly exercise their religious beliefs and conscience rights,” which are protected under the Charter and the Canadian Bill of Rights.

It requests that Parliament amend the Criminal Code sections governing assisted suicide and euthanasia and the Civil Marriage Act “to provide Christians and their faith-based institutions protection from its provisions that are contrary to their religious and conscience beliefs,” and to enact “a policy to review any new legislation” to ensure “it does not impinge upon the religious rights of Christians.”

“It seems to be forgotten that Christians have as much right to express their views as LGBT activists do,” REAL Women researcher Dianne Watts told the Catholic Register. “Our board of directors felt it was necessary to bring this issue forward publicly at this time to hopefully remedy the situation.”

With the Christian point of view repressed, people are left “misinformed about a positive view of the Christian perspective,” Watts pointed out. “The rights of Christians to express their views is defended by our Charter and our laws. Quite often people aren’t aware of that. The assumption is Christians don’t have that defense.”

Indeed, the petition outlines several examples of discrimination against Christians:

When REAL Women’s board decided in June to launch the petition, it realized Justin Trudeau’s Liberal government would likely not act on it, noted a backgrounder on the organization’s website.

The purpose is “to raise the profile of the issue, and to indicate the unacceptability of discrimination against Christians. Hopefully, this may prevent even further deterioration of the situation.”

Watts said the petition will be presented to Parliament by Alberta Conservative MP Michael Cooper in September.