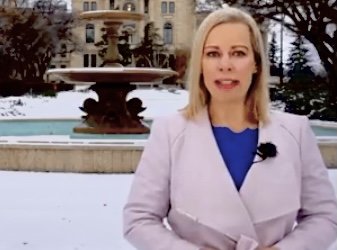 OTTAWA, Ontario (LifeSiteNews) – Senator Denise Batters is no longer a member of the Conservative Party of Canada (CPC) after being kicked out via voicemail because she launched a petition calling for the ouster of party head Erin O’Toole.

On Tuesday, O’Toole released a statement saying that as CPC leader he will not “tolerate an individual discrediting and showing a clear lack of respect towards the efforts of the entire Conservative caucus, who are holding the corrupt and disastrous Trudeau government to account.”

Batters tweeted Tuesday that she was fired from the party in shame by voicemail but that she will not be “silenced.”

“Tonight, Erin O’Toole tried to silence me for giving our #CPC members a voice. I will not be silenced by a leader so weak that he fired me VIA VOICEMAIL. Most importantly, he cannot suppress the will of our Conservative Party members.”

On Monday, Batters launched a petition calling for the ouster of O’Toole, saying he is viewed as ‘untrustworthy’ to lead the party.

Batters, who is from Saskatchewan, said O’Toole has “watered down and even entirely reversed our policy positions without the input of party or caucus members on carbon tax, on guns, on conscience rights.”

According to CPC Party President Rob Batherson, Batters asking for a leadership review of O’Toole did not follow the party’s constitution and was not “in order.”

A Global News report stated that Batters said no one, “either Mr. O’Toole or member of his staff or team,” contacted her “personally at all” before her firing regarding her petition.

On Wednesday, Batters released a statement on Twitter regarding her removal from the party.

Batters wrote that she is “and will always be a Conservative.”

“It is ironic that Erin O’Toole is expelling me from our National Conservative Caucus for asking him to adhere to the principles and policies our Conservative Party members have approved,” Batters wrote.

“Seemingly, Mr. O’Toole cannot ‘tolerate’ criticism. After the election, I raised my concerns with Mr. O’Toole directly. He did not respond and he did not act. I then asked publicly that our members have a voice. His response now is to kick me out.”

Batters also complained that a few weeks ago a fellow Conservative Senate Caucus colleague “levelled similar complaints against Erin O’Toole, even going further to call for his resignation.”

“Yet, he remains a member of National Caucus while I am expelled. Why the double standard?” Batters wrote.

Batters was most likely referring to long-term CPC Senator Michael MacDonald, who said in October that O’Toole’s shift to the left resulted in poor election results, meaning it’s now “necessary” to review him as the leader.

Wrote Batters in her statement, “If Mr. O’Toole is certain that the members of our party support the new direction in which he is taking our party, he should have nothing to fear by facing our members democratically in an expedited confidence vote.”

“That he is fighting against this with threats and intimidation to Caucus speaks volumes,” Batters wrote.

On Wednesday, O’Toole told reporters that it was “necessary” for him to remove Batters from the CPC and that she made the decision to leave “for herself.”

“It was a necessary decision to make for the well-being of our caucus, of our Parliament, and of the country,” O’Toole said, as reported by CTV.

Since winning the leadership of the CPC in 2020 and then losing the 2021 federal election to Justin Trudeau’s Liberals, many have called out O’Toole for his shifting of the party to the left.

A recent report from True North News said that Maxime Bernier, former CPC MP and Cabinet Minister who is now People’s Party of Canada (PPC) leader, said he spoke to an unnamed CPC MP about joining his party.

“Yes, I reached one member of parliament about that,” said Bernier, according to True North News, adding that he knew this MP was “disappointed” in the direction the party was going.

“To that member of parliament, I said ‘if you’re not happy there and you’re not able to speak your mind then come with us,’” Bernier added.

Bernier told the CPC MP that in the PPC they would be “free to speak.” The MP told him however they were “not ready right now” to join his party at this time.

Bernier said his party remains open to any CPC MPs who have “decided to not have the two shots.”

Canada’s federal government has mandated that all democratically elected MPs and staff must have the COVID jabs to enter the House of Commons. The House is set to return on November 22.

As for O’Toole, he recently said after a recent full caucus meeting that all of his MPs will “be vaccinated” with the COVID jabs.

Chen told LifeSiteNews in October that he started the petition “as a result of the request of many of my constituents that felt betrayed by Erin O’Toole’s promises made in the 2020 leadership race,” and who were worried about his shifting of the party to the left.

CLC has also recently called for the immediate removal of O’Toole as head of the CPC and blasted its suspension of Chen.

In early October, Trudeau announced unprecedented COVID-19 jab mandates for all federal workers and banned the un-jabbed from being able to travel by air, boat, or train.

This caused a group of CPC MPs to join together to create a “Civil Liberties Caucus” to speak for Canadians who have chosen not to get the COVID jabs.

The group is led by Sarnia-Lambton CPC MP Marilyn Gladu, who said in an interview that COVID doesn’t pose the same “frequency of risk” as the polio disease.

Gladu had to apologize shortly after this, however.

* Mail may be sent postage-free to any member of Parliament.