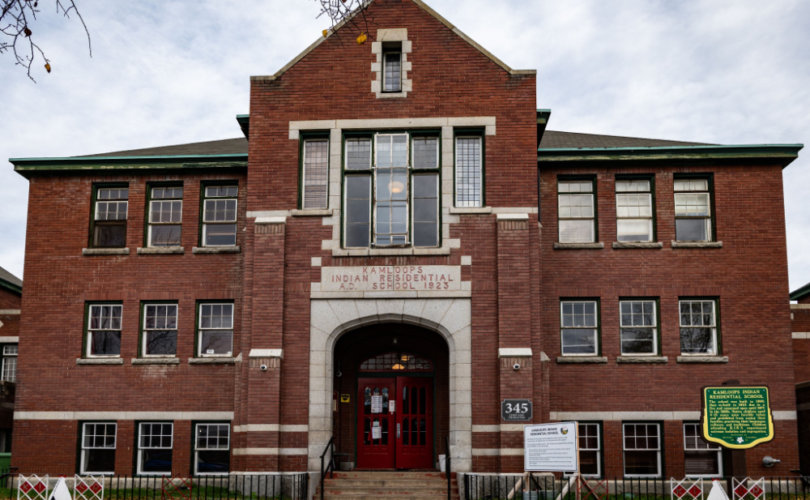 (LifeSiteNews) – Rebel News has produced a documentary called “Kamloops: The Buried Truth” that shows an investigation into claims of “mass graves” and “genocide” at a Catholic-run Residential School that arose in 2021.

Rebel News shared a pre-screening of the film with LifeSiteNews. The film is set to be screened for the first time on September 28 at Canyon Meadows Cinemas in Calgary.

In May 2021, the story of what were allegedly 215 unmarked graves of Native children who died under the care of a Catholic boarding school made international headlines, resulting in escalating hatred and animosity of the Catholic Church. What followed was a summer of retaliatory church burnings, which some believe were encouraged by Prime Minister Justin Trudeau’s rhetoric about the issue.

Since then, the claims out of Kamloops, British Columbia and also additional alleged discoveries of more unmarked mass graves have been convincingly debunked. However, questions about the alleged events still remain.

One of the more curious claims about the alleged discovery of the graves in Kamloops was about a supposed child’s rib bone that had been discovered. Since May 2021, there has been no official police investigation into the situation, which investigative journalist Drea Humphrey and producer Matt Brevner believed was odd, considering the gravity of the allegations.

Curiosity about the alleged bone of what would have been an unceremoniously buried Indigenous child prompted Humphrey and Brevner to dig deeper into the statements about what was buried beneath the Kamloops soil.

Brevner asked Humphrey, “If there is a claim of human remains found on site, don’t the RCMP have a responsibility to go in there?”

“You would think so,” she replied. Humphrey added that she believed it was odd that “no one is talking about the rib bone”considering the fact that if it was really the bone of a murdered child, an investigation by forensic specialists could be done to shed light on what actually happened.

Using journalist instincts, Humphrey decided to follow up with the B.C. Coroner’s Office to find out what is supposed to happen when human remains are discovered. Eventually, after countless emails and calls, Humphrey received a reply from an ID specialist who said that “95 percent” of the “cases where people call or take the bones into the police … it’s not a human bone.”

The specialist told Humphrey that she has investigated “tens of thousands of human and non-human bones” and she said that even doctors and paramedics are often incorrect about their assessment of what the believe to be human remains.

The grave narrative has hinged largely on the notion that ground penetrating radar discovered the bodies of unaccounted for children in a definitive way. And, as the documentary points out, it has been said that the imaging results are considered by those who believe the narrative as “proof” of wrongdoing and murderous cover-up.

However, as LifeSiteNews has reported, ground penetrating radar is not a reliable method of ascertaining the truth of what is under the soil.

Humphrey and Brevner confirmed through the conversation with the ID Specialist that only “anomalies” had been found, which could be anything from rocks to tree roots.

As of yet, no excavation has been undertaken.

Humphrey was able to corner the Tk’emlups te Secwepemc’s Rosanne Casimir, the Chief of the Kamloops Native Band, and she admitted that any excavation was unlikely due to perceived cultural considerations.

There is much more that could be said of the film, and upon conclusion it even seems if there might be a cover-up of the truth by the Tk’emlups te Secwepemc and law enforcement, but there are still many loose ends that cannot be tied up until a real investigation takes place.

Those wishing to learn more about what Rebel News uncovered can attend the premiere by visiting the event website and securing a spot at the theatre.