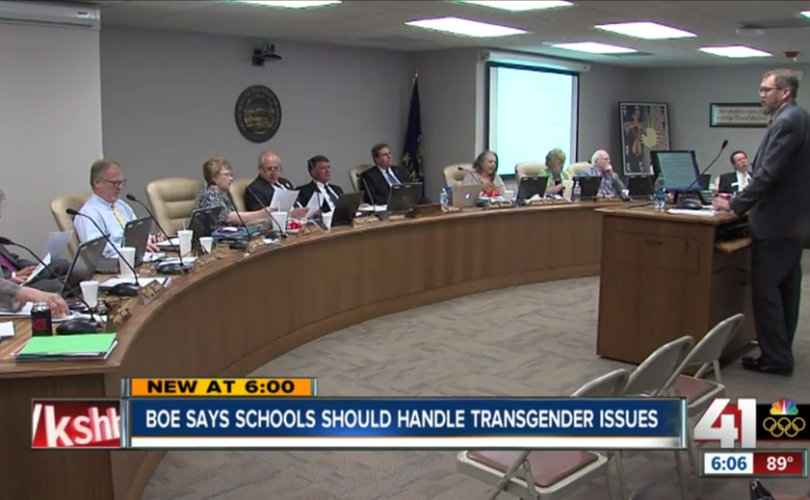 The Kansas State Board of Education meets to vote on the Obama administration's transgender bathroom mandate.

This article originally listed “Claire Chretien” as the author, rather than Fr. Mark Hodges. We regret the error.

TOPEKA, KS, June 20, 2016 (LifeSiteNews) — Under federal threat of losing nearly half a billion dollars in school monies, the Kansas State Board of Education decided to ignore the Obama Administration's directive to allow biological males in the girls' bathrooms, showers, and locker rooms, and vice versa.

The state board voted unanimously last Tuesday not to fall in line with President Obama's directive for “transgender friendly” intimate facilities at schools and issue a statewide policy. Instead, the board decided to leave such decisions up to local school districts.

In April, the Obama administration released guidance stating that students who identify as transgender must be allowed to use the private facilities that match their gender identity with “no medical diagnosis or treatment requirement.” The letter announcing the policy clarified that schools must implement the guidance, “as a condition of receiving federal funds.”

Operation Rescue President Troy Newman told LifeSiteNews that the Kansas State Board of Education's unanimous vote is “consistent with views of vast majority of Kansans. Our state did not vote for Obama in the last two presidential elections. Our state is a Right to Work state, and a Prolife state, and wants nothing to do with the rabid and crazed policies of allowing boys in girls' restrooms.”

The board's attorney, Scott Gordon, told the Associated Press that he doesn’t believe the board’s decision would lead to a loss of funding to the state. He also doesn’t believe that the state would lose funding if individual schools defied the transgender mandate.

At last month's meeting, board members criticized the threat from the Obama administration, but the board voted against issuing a public statement, because they said they needed time to talk to their lawyers.

Kansas Attorney General Derek Schmidt is suing the federal Departments of Justice and Education over the bathroom directive.

“Neither our girls or boys should be forced to undress in the presence of individuals who are of the opposite biological sex,” Huelskamp wrote. “Our children should also not be subjected to a greater risk of threats from predators who seek to do them harm.”

However, Lawrence and Topeka Public Schools have already adopted a policy allowing students to pick their gender and bathroom/shower/locker room, and have provided “gender-neutral” single-user facilities for students not wanting to disrobe in front of the opposite sex.

Texas is leading an 11-state lawsuit against the federal government's threat.