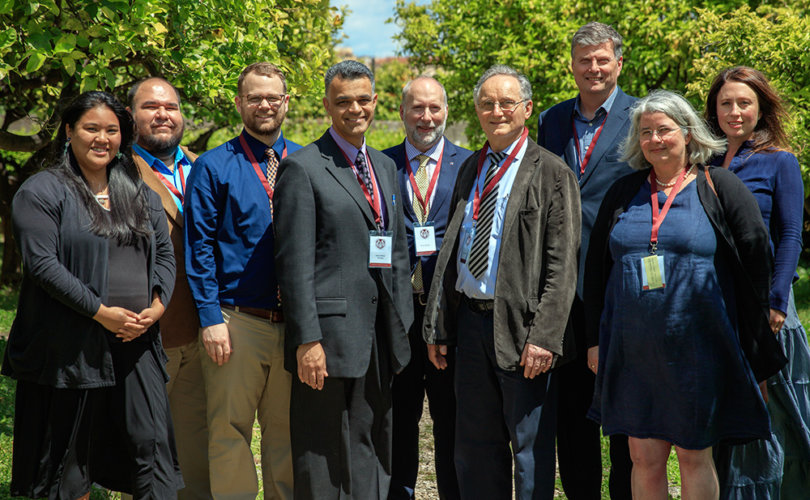 Many of our readers are likely not aware of the extensive amount of necessary travel undertaken by a growing number of our staff to enhance the credibility and effectiveness of our news reporting, culture change efforts, and to network with influential leaders globally.

And, without reader donations, it would be impossible for us to have so greatly increased our international influence for life and family.

With just a few days remaining in our Summer campaign, I hope you might consider a gift of support to keep our journalism as effective as possible.

You can also call our office or send a donation by mail. We’d love to hear from you! And remember, as a 501(c)3 non-profit organization in the U.S., your donation to LifeSite is 100% tax-deductible.

This travel has become an invaluable, although personally demanding and usually quite exhausting dimension of the organization's mission, which is to reach the world on the issues that we cover.

Our recent Rome trip was historic and the largest and most successful international team effort to date.

The photo at the top of this article shows the eleven members of our team, including one of the three LifeSite board members who took part in the Rome efforts this past May. We also had three youth members of what is now the Immaculata Fellowship assist LifeSitenews with the many administrative tasks of the Rome events.

LifeSite has historically set up camp in Rome twice per year over the last several years – in May and then in the Fall. However, the number of events that we are involved in there, and the people who we have been meeting with during these trips, has been constantly increasing.

The fall trips have often coincided with Vatican synods, canonizations and consistories which LifeSite has covered in a way that few others have so honestly and thoroughly covered. But before I share more about our most recent Rome trip and all that we were able to cram into those few days, allow me to mention just a few of the other places to which LifeSite has traveled to especially bring you first-hand the most accurate possible reports on news developments.

If you don't already, you should know that we always send journalists to the annual Washington D.C. March for Life, the Canadian March for Life in Ottawa, and the Rome March for Life. Our in-depth reporting on these national Marches for Life have inspired pro-life persons in other nations to also found their own marches – some of them now far exceeding in numbers the marches that we traditionally covered. John-Henry Westen has been one of the two emcees at the Canadian March for the past few years.

In the US, we have journalists attend and provide first-hand reporting on the CPAC, Value Voters, Legatus, and US Bishops’ conferences. We have also sent journalists to California and elsewhere to be present at David Daleiden court hearings.

That is, we do not rely on second-hand reports from other media to provide you with the most significant and accurate information on these events.

John-Henry Weston has traveled to speak in England, Poland, Germany, Australia, India, New Zealand, and other nations. He and other team members have also traveled to Mexico and other Latin American countries to speak, meet with and interview many leaders, and report on developments in those countries. Our Latin America reporter, Matthew Hoffman, and I presented a full day of talks for most of the pro-life leaders in Mexico. In a few weeks, John-Henry, in response to an urgent request, will be off for a brief visit to New Zealand to help pro-life, pro-family leaders there with a special situation.

During all of speaking engagements we also write news reports, take photographs and record videos, but we also play a significant role in working with local leaders to become better informed and more effective in their efforts and to help them by promoting their efforts through our news service.

There is far, far more that I could write about our journalistic travels, speaking engagements, and pro-life, pro-family networking achievements, but the above gives you at least a bit of a snapshot of what many readers may not be aware that LifeSite does.

During this trip, we heavily participated in two conferences – the two-day, 2019 Rome Life Forum, an organization LifeSite co-founded in 2015, and the also two-day, second annual John Paul II Academy for Life and the Family conference that LifeSite also had a role in forming. John-Henry Westen, two LifeSite board members, journalist Jeanne Smits and I are official members of the Academy.

This year both events’ attendance was doubled and they were very successful conferences. For the first time ever, four Catholic cardinals participated in the Rome Life Forum. There were preparatory meetings in Rome for both conferences before they took place and follow up meetings a few days after each of the conferences. LifeSite was very much a part of these meetings.

We live-streamed both conferences for the first time, also video-recorded all the talks, took numerous photographs, and published many news reports on both conferences. (More videos and reports are still to be published). The live-streaming was possible especially due to the talented efforts of one of our newest team members, Brian Limas.

The talks were video-recorded by yours truly, as well as Assistant Director of Marketing, Stephen Kokx and LifePetitions Director, Scott Schittl.

LifeSite Rome reporter Diane Montagna and Stephen Kokx reported from Rome while LifeSite US and Canadian journalists wrote additional reports on the conferences from viewing the Live-streams and having received the texts of the various talks prior to the conference. Our team played a substantial support staff role for the Rome Life Forum.

Our VP of Operations, Clare Maagad, organized the complex travel, accommodation and food arrangements for all of us and was the key organizer for many other aspects of our Rome activities such as the special day of activities and formation sessions for the youth group with Professor Roberto De Mattei. Her role was so important that I don't know what we would to without here.

John-Henry Westen was one of the speakers at the Rome Life Forum and was the moderator for the John Paul II Academy conference.

All of us participated in the lively, record attendance May 18 Rome March for Life. See the LifeSite report and numerous photos of the event taken by Stephen Kokx on LifeSite and especially in our LifeSite Facebook report on the march. Brian Limas also did our first ever live-streaming of the event to the world as it was happening.

And during the entire 7-10 days that various team members were in Rome there was constant relationship development and mutual information sharing among the very international group of distinguished leaders and other persons who were present for the conferences.

By the end of it all, we arrived home quite exhausted, with numerous follow-up tasks on our plates to be completed in order to present you with full reports on all the significant developments and information we accumulated during that work trip.

All of this is done solely to meet our mission goals of influencing the culture through especially reporting news stories and interviews. LifeSite readers hugely benefit from these efforts.

So, please very much keep our financial needs during the rest of our Summer Fundraising Campaign. We still have $170, 922 to raise to meet our minimum goal in only five days.

It is your generous donations to LifeSite that permit us to influence events in the world and to provide you with the very best news reporting on developments at home and abroad that have an impact on all of us.