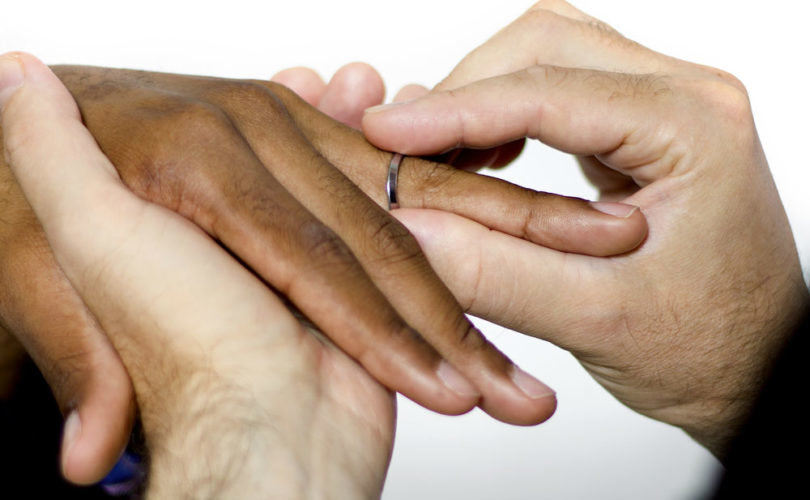 Congress could see a historic number of Republican members who support same-sex “marriage” after the 2014 elections.

This week, National Journal reported that 11 Republicans running to represent their states and districts on Capitol Hill support same-sex “marriage,” as do three incumbents not running in 2014. Six of the 11 candidates are incumbents, while the rest are challengers.

Andrea Lafferty of the Traditional Values Coalition told LifeSiteNews that while the number of GOP candidates and incumbents has grown in recent years, perspective is necessary. “Let's keep in mind there are currently 233 Members of the House and 45 Senators who are Republican,” she said. “Whether the numbers of gay marriage supporters are 3, 5, 6 or 11 – out of 278, these numbers do not make a seismic shift.”

Tim Wildmon, president of the influential American Family Association, warned that “there is a crusade to pressure Americans, legislators, and all people to normalize two men or two women having sex with each other to be called a ‘family’ – that same-sex marriage is OK. This sends the wrong message, especially to children who are impressionable.”

“Approximately 3% of the U.S. population is homosexual, at most,” Wildmon told LifeSiteNews. “I can’t imagine that legislators who are trying to be inclusive of such a small percentage of the population wouldn’t understand that they are really alienating most Americans who have traditional values and who are not voting for same-sex marriage to be the law in their states.”

In the Supreme Court's 2013 Windsor decision, which overturned the federal Defense of Marriage Act, Justice Anthony Kennedy seemed to indicate that marriage is a state issue — and, thus, not in the purview of any candidates for Congress to influence with policy. Wildmon agreed with this assessment, saying that “state legislators, not federal, should be the only ones voting on this state issue.”

Bob Witeck, an LGBT-issues consultant and same-sex “marriage” supporter, told LifeSiteNews that he believes growing support for same-sex relationships in the American public is “compelling the GOP to change.”

“Republicans who particularly wish to broaden their base, and attract younger voters, would be wise to acknowledge (if not accept) the inevitability of marriage equality in the U.S. sooner rather than later,” he said. For now, “the GOP's base includes a significant portion of evangelical and profoundly conservative voters, largely in red states, who are likely unmovable and serving as a brake on this change.”

However, Lafferty said that redefining marriage is far from a certainty in America, and that articles like National Journal's do harm to an honest assessment of public support. “In a recent poll, support barely garnered 50 percent,” she said. “But the media is doing its best to shift the facts with grandiose claims.” She called the National Journal article's headline, There Are Now More Republicans Running for Congress Who Back Gay Marriage Than Ever Before, “screeching.”

An April poll conducted by the conservative groups American Values and Family Research Council showed that 82 percent of GOP and GOP-leaning voters support traditional marriage. The National Journal article cites the pro-same-sex “marriage” group PAC American Unity to note that the 11 Republican candidates in 2014 represent six more GOP candidates “who had a chance of winning” running for Congress as supporters of redefining marriage.