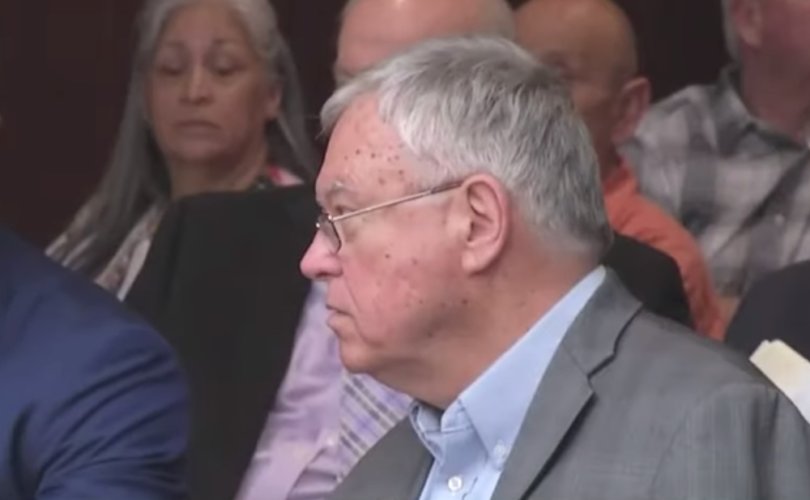 SAGINAW, Michigan, May 23, 2019 (LifeSiteNews) – Recordings of a priest convicted of multiple counts of sexual assault on males have been released, providing incontrovertible evidence of homosexuality as a factor in clerical sexual misconduct.

DeLand was caught in a sting operation after the parents of the 17-year-old boy he was grooming went to the police.

According to Church Militant, the popular priest was working as a hall monitor at Michigan’s Freeland High School when he first singled out the young man, who had gotten into trouble with the law for underage drinking and was grieving the recent suicide of a friend.

The friend who committed suicide, Michael Dennis, had spent a lot of time with “Fr. Bob.”

“It started with DeLand offering to pay for [the victim’s] grief counseling sessions and then suggesting that he complete his community service hours at his condo, where the priest could get him alone,” explained Church Militant CEO Michael Voris in a special report yesterday.

“His parents, alarmed by the priest's latching on to their son, went to the police, who launched a secret investigation, wiring the victim so he could record his interactions with DeLand.”

The teenager also pretended to experience same-sex attractions, and the recordings Church Militant has published show that the priest seized upon this theme.

“Look. If you're gay, I don't care,” the priest said to his intended victim. “And I have a feeling that there's some gayness in there. And you know what? I love you as you are. And so if you're gay, you're gay. Bring home a boyfriend, I'm gonna love him just as I love you.”

He also encouraged the boy to cultivate and act out these homosexual desires.

“I mean, do you have any curiosity about doing it for real?” he asked the boy.

“Well, I think you ought to try to find somebody. […] You think you can? There are certainly guys right around schools. […] Attracted to anybody at school? […] When was the last time you found yourself attracted to other guys? [… ] I think you would know how to investigate,” DeLand continued.

DeLand also encouraged the boy to smoke against his parents’ wishes, to drink alcohol, and to use drugs. Detective Brian Berg, who led the investigation into the abusive priest, told Michael Voris these are typical tactics sexual predators use to build trust.

The priest had many other male teenage victims, and Berg estimates that within a 33 year period, up to five suicides may be attributed to DeLand.

Ultimately, on February 25, 2018, when he thought the teenager was high on ecstasy, DeLand touched him inappropriately and the boy fled his condo. Minutes later, the priest was arrested.

The 14 hours of recordings were not played at the trial.

According to Michigan news site mlive.com, in March 2019, DeLand pleaded “no contest” to the charges of second-degree criminal sexual conduct, gross indecency between two males, and “manufacturing or distributing an imitation controlled substance.” DeLand faced three trials for various charges, but avoided the third one by pleading “no contest.”

Before his arrest, DeLand served on the board of an anti-child abuse organization, the CAN Council Great Lakes Bay. In a 2010 interview, the priest revealed he was the Diocese of Saginaw’s vocations director for five years, something the diocese neither confirmed nor denied when LifeSiteNews asked about it following DeLand’s arrest.

‘Excruciating’ to listen to the records of ‘perverse predator’

“As producer and writer of this special report, it was excruciating for me to sit through hours of DeLand's audio recordings to find the clips we would use,” she said via social media.

“My only consolation was knowing that the victim was in on the plot and aware of what the priest was trying to do. But how many thousands of victims of so many predator priests just like DeLand have had their lives destroyed, a number of them committing suicide, as a result of the same kind of grooming?” she continued.

“These audio recordings give a unique and crucial inside look into how these perverse predator clergy operate, and how they groom vulnerable young men by using homosexuality to lure them into abuse.”

Michael Voris told LifeSiteNews that he finds the hard truths about clerical sexual grooming and assault “disgusting and revolting.”

“It is disgusting and revolting to know that this is business as usual, only this occasion [it] was caught on police audio recordings,” he stated. “That the bishops continue to know and cover this up is damnable.”

In a blogpost published this morning, Father John Zuhlsdorf said that the priest’s encouragement of the boy’s feigned homosexuality sounded familiar.

“One thing that this perverted, twisted, probably possessed priest said rang in my ears as familiar. To wit: Some of the manipulations that this sicko used on this young man sounded very much like the homosexualist propaganda of a certain highly visible Jesuit. ‘You’re okay! It’s okay to feel this way! Doesn’t it feel better to say it? Be who you are! I love you anyway’.”

Niles concurred and told LifeSiteNews that DeLand was a “big fan” of celebrity priest and LGBT activist Fr. James Martin.

“The rhetoric used by Fr. DeLand towards the victim is the same heard by priests like Fr. James Martin – that God made them gay, that gay is good, that they should explore their homosexuality and be comfortable with it, etc.,” she wrote.

“In fact, Fr. DeLand was a big fan of Fr. Martin, and was angry when one of Martin's talks that DeLand had planned on attending was canceled owing to Church Militant's reporting.”

Michael Voris added, “Of course they are all cut from the same cloth: the homoheretic crowd that is seeking to destroy the Church.”

The 2004 John Jay Report acknowledged that 80 percent of clergy sexual abuse victims are male and that the vast majority of them were post-pubescent. This and other reports have led many experts, including Elizabeth Yore, whom Voris interviewed for the special report, to insist that what is referred to as the Church’s pedophilia problem is more broadly a crisis involving homosexual attraction of clerics to teenage boys.