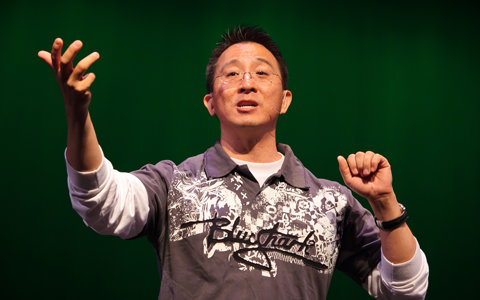 September 24, 2012 (LifeSiteNews.com) – Redemption is not always found where you might expect it. For Christopher Yuan, a former drug dealer who had been living the promiscuous homosexual lifestyle, the new beginning he so desperately needed was found in one of the unlikeliest places on earth: a prison trashcan.

It was in that trashcan that Yuan, who was just three days into a six year prison sentence for dealing drugs, discovered the Gideon’s New Testament that was to completely turn his life around.

Ever since he could remember, Yuan says, he had always been smaller than his peers and was frequently made fun of.  His size combined with a studious, nonathletic demeanor meant he felt out of place.

“Kids are always cruel, and they pick on kids for being different,” Yuan told the Christian Broadcasting Network in a video interview.

At nine years of age, he was exposed to pornography at a friend’s house and was surprised to find he was attracted to the men as well as to the women. This confused him, but he kept his feelings to himself.

After high school, Yuan began visiting gay bars and actively pursued a homosexual lifestyle.  Before enrolling in dental school, he came out publicly about his sexuality.  His parents were blindsided and told their son he had to choose them or his lifestyle.  He chose the latter.

“I believed homosexuality was at the core of who I was,” Yuan told CBN.

Yuan started using drugs and then moonlighting as a drug dealer, living as a student by day and a dealer by night, while engaging in numerous homosexual encounters.  It was only a matter of time before his double life caught up with him.  Yuan was expelled from dental school and from then on, his life spiraled out of control.

For a while he felt like he was on top of the world, making big money and having as much sex as he wanted; but his lifestyle was brought to a halt one morning by a knock on the door. Twelve federal drug agents stood on his doorstep. Yuan was caught red-handed and arrested for possessing the street value equivalent of 9.1 tons of marijuana.

Ironically, a jail sentence would be the best thing that happened to Yuan.

While Yuan was in medical school, his parents had become Christian. They both prayed regularly for Yuan. Those prayers were to pay off.

Three days after arriving in prison, Yuan saw a book out of the corner of his eye as he walked past a prison trash bin.  He retrieved the book out of the filth and discovered it was a Gideon’s Bible.  He had never read the Bible before but Yuan, who was at the end of his rope, decided to open it up. That night he read the entire Gospel of Mark.

But though it seemed that Yuan’s life could not get any lower, several weeks after discovering the Bible, he was called in by the prison nurse. She told him she had some bad news: he had tested HIV positive. One night, some days after receiving the devastating news, Yuan was lying in his cell, in despair, and while looking at the graffiti in his prison bunk, he noticed graffiti that encouraged bored prisoners to read Jeremiah 29:11. Yuan did so.  Verse 11 says, “For I know the plans that I have for you, declares the Lord. Plans to prosper you and not to harm you.”

Yuan devoured the Bible over a yearlong period, and the words began penetrating his heart until he was convicted that he was not living rightly before God.

In the process he searched the Scriptures for any justification for his homosexual lifestyle. “I never found anything,” Yuan says.

After serving only three years, Yuan was released from prison and from then on, he says he has desired to live each day before God with purpose.  His positive HIV status has contributed to this sense of urgency.

Now Yuan teaches at Moody Bible Institute in Chicago and is pursuing his doctorate in ministry.  He also travels the world to speak about his past and has written a book with his mother entitled, “Out of a Far Country.”

There is also another challenge Yuan gives his audience.  He says there is a tendency to think individuals can make an easy switch from living as homosexuals.  This is not the reality.  Yuan say recovering homosexuals need to be treated with the same grace as recovering drug addicts or alcoholics. There is no easy road out of the homosexual lifestyle, and often, the homosexual inclination will remain.

Yuan states, “Being a Christian is not an easy thing. I may still struggle, but God has given me the grace. God has claimed the victory on the cross. Though I may still have struggles, I’m not going to be bound by them.”