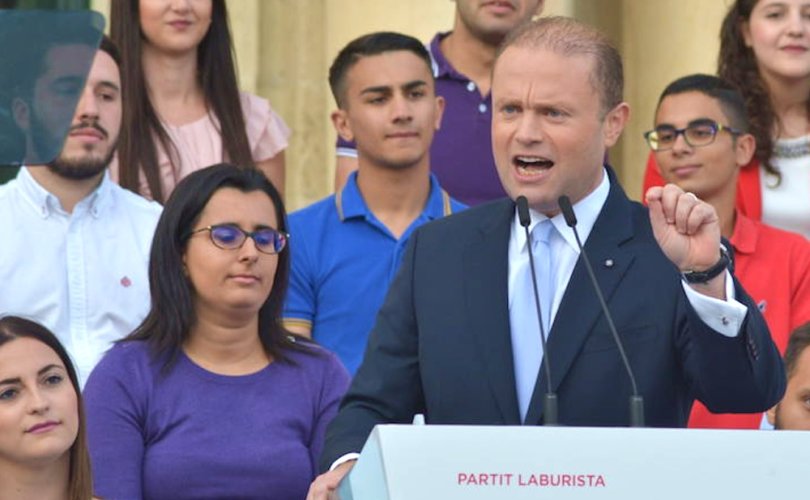 “The first law that we are going to put on the agenda — and I hope that it is approved as quickly as possible — is that of the equality of 'marriage,' the Marriage Equality Bill. We will make sure that it will be the first law to be placed on the agenda of the parliament, and that it is concluded,” he said after the June 5th swearing-in ceremony. (see minute 5.50 of video below) ​

Muscat's Labour Party won 55 percent of the vote in the June 3 election.

Three years ago the Parliament of Malta legalized same-sex civil unions with similar rights and responsibilities to real marriage. The bill allowed same-sex civil partners to adopt children, despite strong public opposition to the measure.

At the time of the bill’s passage, Prime Minister Muscat stated that “Malta is now more liberal and more European, and it has given equality to all its people.”

Bishop Charles Scicluna, then auxiliary bishop of the Diocese of Malta, originally opposed the bill, saying that “to vote in favour of a law so harmful to the common good is gravely immoral.”

But Scicluna has since backpedaled his opposition to civil unions, telling Malta Indep last year that homosexual civil unions are a “service to the dignity of these people.”

“I think that we should support legislation that gives same-sex partners their dignity and their social protection,” he said in the March 19, 2016, interview.

It is unclear where the Malta bishops will stand in relation to Muscat’s promise of a homosexual “marriage” law.

A Catholic source in Malta told LifeSiteNews that the country's Church authorities have been largely silent “against these gravely immoral laws.”

But Church authorities have not been silent when it comes to distancing themselves from faithful Catholics who defend real marriage in the public square.

Last month, Scicluna, along with Bishop Mario Grech of Gozo, attacked a group of faithful Catholics in Malta after it published a full-page ad in a widely read paper defending real marriage against “unnatural” homosexual “marriage” in the lead-up to the election.

The ad, published in the May 21 edition of MaltaToday by “Maltese Catholics United for the Faith,” stated that the sanctity of marriage must be respected.

“We respect everyone, be they teachers, nuns, gays, immigrants, or self-employed…Respect is at the heart of it all. But the sanctity of marriage, between husband and wife, doesn’t grant a right to everyone to marry anyone,” the ad stated.

The ad criticized the country’s two political parties vying for leadership for “incrementally beef[ing] up their standing at the ballot box by promising or enacting gay marriage laws for the 1%.”

“Same-sex marriage is unnatural. It runs against natural law as designed by God and handed down to us through every generation in our Maltese history,” stated the ad.

The bishops criticized the ad as “propaganda,” stating that they had “nothing to do” with the group.