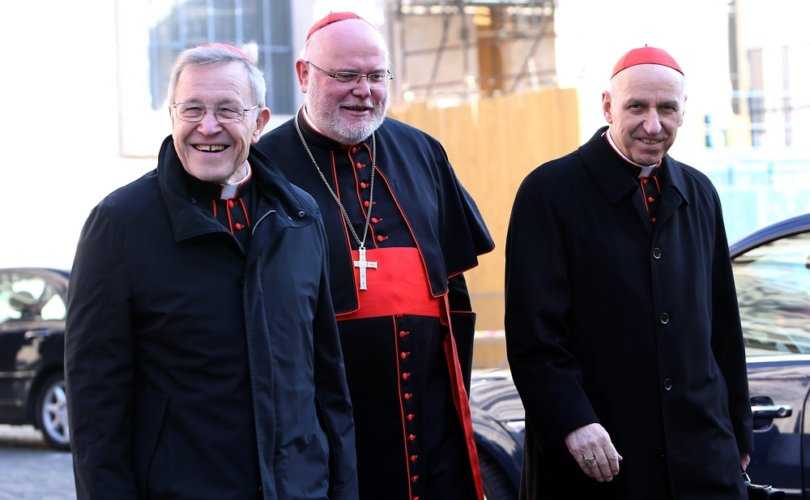 February 3, 2020 (LifeSiteNews) – The upcoming reform of the Roman Curia could have far-reaching consequences for the Catholic Church in Germany, potentially leading to a validation of the synodal path currently underway.

In an analysis piece at Catholic News Agency (CNA), canon lawyer Ed Condon pointed to a draft of the document on the reform of the administrative institutions of the Vatican and the Catholic Church currently being prepared by Pope Francis.

“In what would be a significant innovation, the draft constitution specifically refers to the ‘genuine doctrinal authority’ of national bishops’ conferences,” explained Condon. Further, according to the draft, the Congregation for the Doctrine of the Faith “‘will apply the principle of subsidiarity’ on any measures related to ‘protecting the faith.’”

Pope Francis indicated in his 2013 apostolic exhortation Evangelii Gaudium his openness to granting “genuine doctrinal authority” to bishops’ conferences. In the same section of the exhortation, he also cautioned against “excessive centralization.”

The draft of the document on the reform of the Curia, titled Praedicate Evangelium, has been circulating among departments in the Vatican, bishops’ conferences, apostolic nuncios, and others, since mid-2019.

In Condon’s article, “multiple sources familiar with the drafting process” are cited as saying the document “was heavily informed by the wishes of Cardinal Reinhard Marx of Munich, head of the German bishops’ conference, and a key member of the Pope’s council of cardinal advisors.” This, added Condon, “was the focus of sustained criticism in feedback offered by bishops around the world last summer.”

Officials working for the Congregation for the Doctrine of the Faith and the Congregation for Bishops told CNA “that, if the provision remains in the final text of the constitution, it would essentially validate the German synodal process, whatever the curia’s stated objections to it.”

In the fall of 2019, Cardinal Marc Ouellet, head of the Congregation for Bishops, passed along to Cardinal Marx a legal assessment of the German bishops’ draft statutes by the Pontifical Council for Legislative Texts.

Among other things, the assessment asked, “How can an assembly of a particular Church decide on issues of the universal Church, and how can an episcopal conference be dominated by an assembly of which most members are not bishops?”

The German bishops’ conference responded by pointing to the fact that the Vatican only analyzed a draft of the statutes. The assessment did not take into account “the version updated in July and after the meeting of the Permanent Council in August, which no longer contains some passages to which the assessment refers.”

Additionally, in a letter to Ouellet, Cardinal Marx had pointed out that the Church in Germany had intentionally chosen a form of proceedings not covered by canon law. Thus, claimed the archbishop of Munich, the statutes should not have been looked at through the eyes of canon law.

Pope Francis himself had sent a letter to all Catholics in Germany at the end of June. However, as LifeSiteNews reported at the time, “since Pope Francis wrote in a more general manner and chose not to mention any specific topics of the new synodal path – such as the questioning of priestly celibacy and of the Church’s teaching on sexuality – the different camps in Germany all interpret his letter in a way pleasing to them.”

In spite of that correspondence with the Vatican, the synodal path in Germany continued to move forward. In early February 2020, the first assembly of the synodal path concluded in Frankfurt. The second assembly is scheduled for early September.

Ed Condon, in his article on the reform of the Curia, quotes a senior Vatican official as saying, “This is the reason for their confidence, and for the boldness. It is a waiting game – they say to us ‘wait and see [our] results before you judge the process,’ but by then they can say they have this authority and demand subsidiarity.”

The source added, “Never mind which dicastery comes first in the line [in Roman precedence], these two sentences can remake the whole Church.”

Episcopal conferences, commonly referred to as bishops’ conferences, have existed since the 19th century. They are informal organizations of the bishops of a given territory.

The decree Christus Dominus of the Second Vatican Council first formalized bishops’ conferences as part of the constitution of the Church. In it, the council fathers stated, “This sacred synod considers it to be supremely fitting that everywhere bishops belonging to the same nation or region form an association which would meet at fixed times.”

The document defined, “An episcopal conference is, as it were, a council in which the bishops of a given nation or territory jointly exercise their pastoral office to promote the greater good which the Church offers mankind, especially through the forms and methods of the apostolate fittingly adapted to the circumstances of the age.”

In 1983, the new Code of Canon Law explained, following the directives of the Second Vatican Council, “The Episcopal Conference can make general decrees only in cases where the universal law has so prescribed, or by special mandate of the Apostolic See, either on its own initiative or at the request of the Conference itself.” Otherwise, the competence of each diocesan bishop remains intact, meaning the bishop makes the decisions within his diocese.

In his apostolic exhortation Evangelii Gaudium, Pope Francis referenced the Second Vatican Council, saying that “like the ancient patriarchal Churches, episcopal conferences are in a position ‘to contribute in many and fruitful ways to the concrete realization of the collegial spirit.’ Yet this desire has not been fully realized, since a juridical status of episcopal conferences which would see them as subjects of specific attributions, including genuine doctrinal authority, has not yet been sufficiently elaborated. Excessive centralization, rather than proving helpful, complicates the Church’s life and her missionary outreach.”

Pope Francis’ document on the reform of the Roman Curia is still being evaluated by his council of cardinal advisors. Apart from Cardinal Marx, the members are Cardinal Secretary of State Pietro Parolin, Cardinal Óscar Rodríguez Maradiaga from Honduras, Cardinal Seán Patrick O’Malley, the archbishop of Boston, as well as Cardinal Giuseppe Bertello, the President of the Governorate of Vatican City State, and Cardinal Oswald Gracias from India.

In December 2019, when the advisors met last time, the Holy See Press Office released a statement indicating that one of the aspects that still needed further study was the question of “the relationship between the Curia and the episcopal conferences.”

The council of cardinal advisors will come together again in Rome this month.