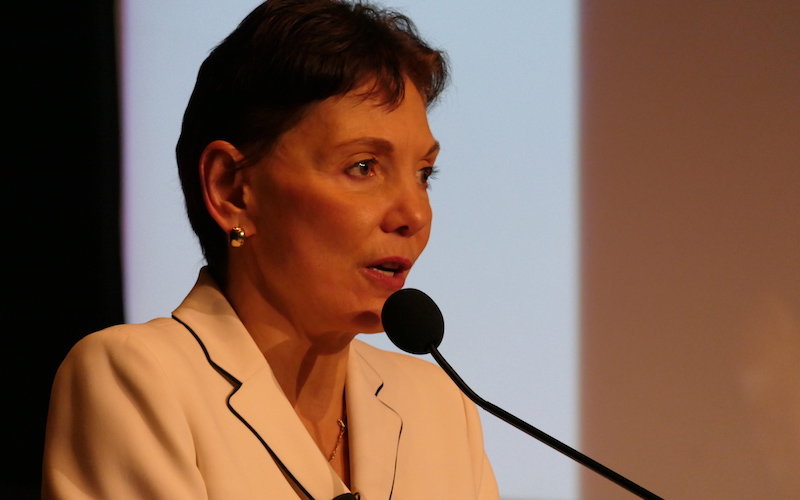 WASHINGTON, D.C., February 2, 2017 (LifeSiteNews) – We are at an “unprecedented moment in history” with the opportunity to fight and end forced abortion in China, a leading women's rights advocate told 600 college students the day after the March for Life.

In her talk, she outlined the work she does to stop forced abortions and gendercide, and exhorted students to seize the “new day” by joining the battle.

Littlejohn's keynote address touched on how Mother Teresa inspired her to fight for human dignity and how the experience of miscarriage led her to be such a staunch pro-life advocate. She praised President Trump for reinstating the Mexico City Policy prohibiting American funding of abortion and abortion promotion overseas.

“The pro-life movement has spent 40 years in the wilderness, and then overnight, by a miracle, it seemed, there was a parting of the great sea and a wave swept our land out of darkness and into the light,” said Littlejohn. “Never since the Roe v. Wade decision passed in 1973 have we seen a pro-life House, a pro-life Senate, a pro-life Vice President who actually came to speak at the March for Life, a pro-life president who tweeted his support for the March for Life…This sea change belongs to all those who have worked, prayed, donated, and voted for it.”

“This is a new day in America,” she continued. “It is a time for celebration, but it is not a time for relaxation.”

Because a baby's sex cannot be determined until about halfway through pregnancy, all sex-selective abortions are by definition late-term. 400 million lives have been prevented through China's one child policy, Littlejohn said, making forced abortion “the greatest women’s rights issue and the greatest life issue in the world today because of the numbers involved.”

Even though China recently eased its population control policy slightly, women are still fined sometimes “up to 10 times” their annual salary if they exceed their two-baby quota. A cultural preference for boys means girls – especially girls who already have an older sister outside the womb – are targeted for sex-selective abortion.

“If you can’t pay the fine, you will have an abortion,” Littlejohn said, and women who resist are literally held down on operating tables. “This is the true war against women.”

“Because of this gendercide, there’s a shortage of women in China which is driving human trafficking and sexual slavery,” she told the students. “And people sometimes ask, ‘How do the women of China deal with this?’ The answer is very sobering. China has the highest female suicide rate in the world.”

The U.S. State Department reports that “590 women a day end their lives in China,” Littlejohn explained. “And in the countryside, the main method they do this is by drinking pesticides, which is just a horrible, painful, slow way to go. So you can imagine the mental anguish that these women are in to do this to themselves. And I don’t think that that is unrelated to forced abortion…when women are forced, culturally, to selectively abort their baby girls, how does that make them feel about their own right to draw breath on this earth?”

Another unintended effect of the one- and two-child policies has been “a rash – almost an epidemic – of senior suicide,” said Littlejohn. “They have too few young people to support their rapidly aging economy and that’s why they moved from a one-child policy to a two-child policy. It wasn’t because they repented of forced abortion; it’s because they saw that while they instituted the one-child policy for economic reasons, they actually have written their own economic death sentence through this.”

'God cares about the whole world'

“To build the political will to stop an atrocity, people first have to know about it,” said Littlejohn, who has spoken to the U.S. Congress, European Parliament, and the United Nations Commission on the Status of Women. “As George Orwell once said, ‘in a time of universal deceit, telling the truth is a revolutionary act.’ And why do we care about what’s happening on the other side of the earth? Well, first of all, people of China can’t speak for themselves. They do not have freedom of speech the way that we do.”

One example of their limited freedom to speak is the story of the father of Littlejohn's adopted daughter Annie – a pro-democracy activist, he was violently tortured. Authorities kidnapped Annie from her fourth grade class in an attempt to punish him. Littlejohn and her husband saved Annie and her sister Lilly from a life of government persecution. They are now thriving in the United States.

Because Americans have freedom of speech, “we are responsible to give voice to the voiceless,” said Littlejohn. “God cares about the whole world, including the people of China who are under this brutal regime and can’t do anything to stop it.”

'Boots on the ground' have saved over 200 girls

Women's Rights Without Frontiers has “boots on the ground” in China, Littlejohn said. These field workers go to the doors of pregnant women being pressured to abort and share a message of hope and love with them. They encourage them not to “abort or abandon” their babies.

Women's Rights Without Frontiers offers a monthly stipend for a year to women who are facing pressure to abort. The campaign has saved over 200 baby girls.

“These women don’t want to abort their daughters…they’re hungry to hear this message” that their babies are wanted, she said. The monthly stipend is “enough for her to go back to her in-laws, and say, 'look, I can afford this baby. She’s a lucky girl, she’s already bringing money into the family.'”

There are also “people inside the [Communist] party who actually agree with what we’re doing,” and that’s made it easier for them to help women, said Littlejohn.

Littlejohn said the “gratitude” Chinese women have for the help they receive is beautiful.

“There are good works that each one of us was born to perform,” Littlejohn concluded. “No one else can do what God has set for us to do. Every one of you is born as such a time for this. Be a light of the world. Help bring this country out of darkness. And set the world on fire.”