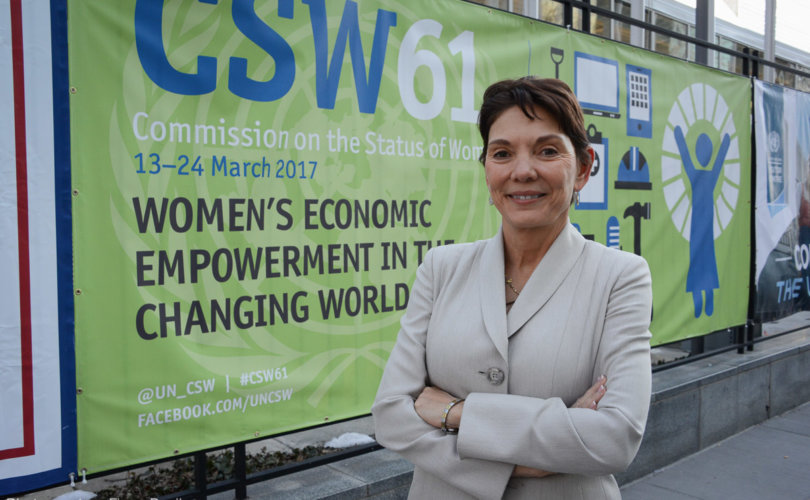 Reggie Littlejohn stands before the UNCSW 61 banner at the United Nations in New York. Fiona Basile

March 31, 2017 (LifeSiteNews) — Women’s Rights Without Frontiers has hosted its first event – entitled, “Femicide, Trafficking and Reproductive Violence Against Women and Girls” — at the United Nations Commission on the Status of Women (UNCSW).  WRWF Founder and President, Reggie Littlejohn, discussed reports that forced abortion of third children and single women, as well as the conditions that give rise to the sex-selective abortion of baby girls, continue under the two-child policy.

One of Littlejohn’s recommendations regarding how the UN can help the women and babies of China is by investigating UNFPA’s activities in China, demanding transparency, and in the case of a lack of cooperation, defunding UNFPA.  Littlejohn states: “The United States Secretary of State should investigate and evaluate UNFPA’s activities in China, and the President should de-fund them under the Kemp-Kasten Amendment, which ‘prohibits funding for any organization or program that, as determined by the President, supports or participates in the management of a program of coercive abortion or involuntary sterilization.’”

“UNFPA has been found to be complicit with coercive population control in China in the past, and I have no doubt that any unbiased investigation would find them complicit again.  I have long advocated for the defunding of UNFPA.  The U.S. cut off funding to UNFPA in 2002 because an investigation, headed by then Secretary of State Colin Powell, found that UNFPA was complicit with the Chinese Family Planning officials in coercive implementation of China’s one-child policy.  The Obama administration restored this funding.  The UNCSW – as the advocate for women’s rights within the United Nations – should press relentlessly on the UNFPA to be fully transparent and accountable regarding its ‘family planning’ activities in China.  I believe that any independent, unbiased investigation into UNFPA’s activities in China will lead to the inescapable conclusion that they are complicit with China’s population control practices, which include forced abortion and involuntary sterilization.  To the extent that the global community is funding the UNFPA, the blood of Chinese women and babies is on our hands.”

Littlejohn also recommended that the Chinese government implement a program to save baby girls, similar to the WRWF’s successful “Save a Girl” Campaign.  She stated, “Women’s Rights Without Frontiers has found our ‘Save a Girl’ Campaign to be highly effective in saving the lives of baby girls in China and enabling mothers to keep their daughters.  When our network in China learns of a woman who is being pressured to abort or abandon her baby girl, or whose family is so poor that her daughter is at risk, a fieldworker will go to her door and offer encouragement and practical support, saying, ‘Don’t abort or abandon your baby girl.  She is a precious daughter and will bring you much joy!  We will offer you monthly support for a year to enable you to keep your daughter.’  We have saved hundreds of baby girls this way in our small area of China, and would encourage the Chinese government to implement such a program nationwide, to address China’s pressing gendercide issue.”

The panel also featured Arina Grossu of the Family Research Council, whose topic was “Sex Trafficking and its Relation to Pornography, Violence and Abortion”; and Rebecca Oas of C-FAM, whose topic was “Distortions in the Data: Ensuring Women’s Priorities Count in the SDG Indicators.”  Attendance was standing room only.