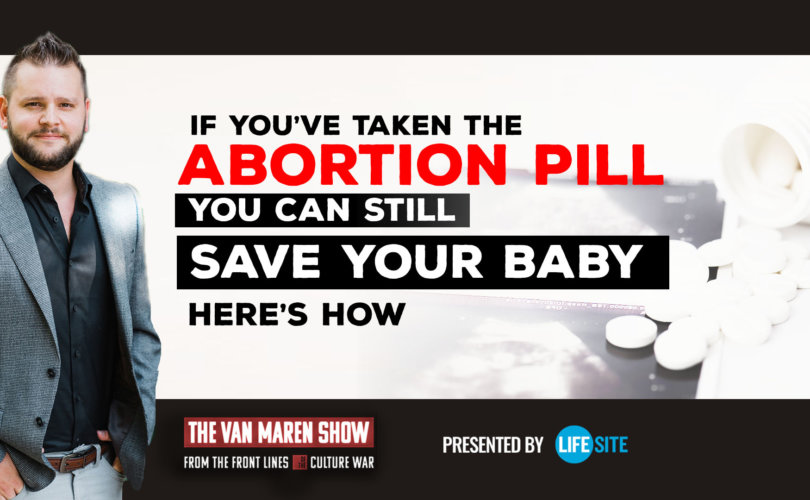 December 4, 2019 (LifeSiteNews) – In today’s episode of The Van Maren Show, Jonathon Van Maren speaks with Dr. Matthew Harrison, one of the doctors who pioneered the abortion pill reversal method. RU-486 – the abortion pill – kills the growing baby by starving him or her of the hormone progesterone. Dr. Harrison and his colleagues discovered that progesterone injections could help save the baby.

Dr. Harrison shares the story of being eight years old when his mother lost one of his siblings at birth. It was shortly after Roe v. Wade. He recalled how odd he thought it was that nurses and doctors were crying about his mother’s loss but other babies were being intentionally killed without any tears shed.

In medical school Harrison refused to participate in training events at Planned Parenthood. He continued to stand up against the pro-abortion culture by refusing to prescribe birth control or refer for abortions during his residency.

After his residency, Dr. Harrison joined a natural family planning-only practice that didn’t prescribe birth control. His partner, Dr. Holland, completed fertility training at the Pope Paul VI Institute (now the Saint Paul VI Institute) and began treating women with luteal phase disorder with progesterone to help them maintain pregnancy. Harrison shares how this treatment helped women who had spent tens of thousands of dollars on failed in vitro fertilization.

While working together, Dr. Harrison and Dr. Holland used to speak with women on the sidewalk outside of abortion centers to offer their OB/GYN services for free. They also worked with crisis pregnancy clinics to help women who were considering abortion.

In 2006, a crisis pregnancy center that Harrison and Holland worked with called and said, “we have a girl who has taken RU-486 and has changed her mind, what can we do now?” This was Harrison’s first real exposure to the abortion pill.

The pregnancy center sent the 19-year-old, Ashley, to Harrison’s clinic. He met with Ashley and her mom and then asked them if he could think and pray about how he could save her baby. Harrison read about how RU-486 worked as a progesterone blocker. He realized he could flood the young lady’s system with progesterone and hopefully reverse the effects of RU-486.

Harrison explained the procedure to Ashley and her mother, emphasizing that this had never been done before. Ashley insisted she wanted to try anything to save her baby. Harrison gave Ashley a progesterone injection that day (Thursday), but the next day Ashley started bleeding.

Ashley went to the emergency room and instead of rushing her to start a dilation and curettage (an abortion method also used to remove miscarried babies from their mothers), the ER physician did an ultrasound and detected a heartbeat. On Monday, Ashley returned to Dr. Harrison and received another progesterone shot. She received a shot every other day for the entire first trimester. Her lovely, healthy, and completely normal daughter Caylee was born at 40 weeks.

When Harrison shared the story with Fr. Frank Pavone of Priests for Life, Fr. Pavone encouraged Harrison to develop the protocol and broadcast it far and wide. Harrison, who was a medical advisor for Priests for Life, was hesitant about how the medical community would respond.

He realized, though, that other physicians were starting to come to the same conclusion independently. Dr. George Delgado in San Diego advised an El Paso physician to give a woman who regretted taking RU-486 progesterone shots. She was able to give birth to a healthy baby.

Other physicians connected and collected data on women who had tried progesterone for abortion reversal and realized it was much more than just an accident or a one-off success. Harrison, Delgado, and other physicians developed a kit called the Abortion Reversal Kit that they supplied to doctors’ offices to make it easy for them to help women seeking to reverse the effects of RU-486.

Delgado is founding the Sterno Institute, which will focus on research and award grants to physicians doing pro-life research.

Harrison encourages listeners to visit the Abortion Pill Reversal Network and/or Heartbeat International online to learn more about their work and to volunteer to help save lives.