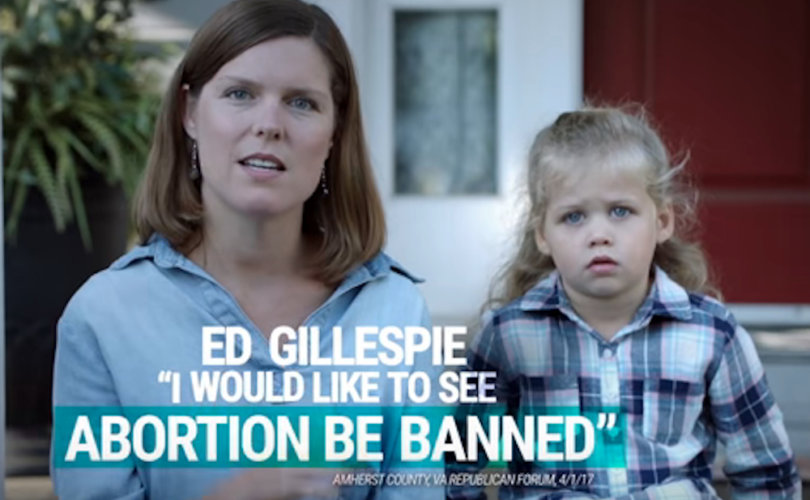 VIRGINIA, October 19, 2017 (LifeSiteNews) – Ads for the Democratic candidate for Virginia governor depict an abortion activist as a “regular” voter.

Ralph Northam, the current Lieutenant Governor of Virginia, is competing against pro-life Republican Ed Gillespie to be the commonwealth’s next governor.

Erin Matson, the co-founder of Reproaction, appears in two ads for Northam that criticize Gillespie for his pro-life views.

“Ed Gillespie wants to end a woman’s right to choose,” the ad “Want to See” says as Matson sits on a porch with her small daughter. The ad says Gillespie wants the “government in charge of women’s personal decisions,” not mentioning that these “decisions” involve the killing of a tiny human being.

Matson and her daughter also appear at the end of the pro-Northam ad “Sold,” which doesn’t mention abortion.

It seeks to “empower and inspire the reproductive rights movement and the broader progressive community to openly and enthusiastically stand up for abortion rights.”

Reproaction recently protested outside Values Voter Summit (VVS) with a banner proclaiming, “Abortion: Not just for your mistress.” This was an apparent reference to Rep. Tim Murphy, R-Pennsylvania, who despite his publicly “pro-life” positions was revealed to have asked his mistress to obtain an abortion when he thought she was pregnant.

Murphy is resigning from the U.S. House later this month.

Reproaction also paid for a snapchat filter to reach VVS attendees, giving them the option to superimpose their disappearing photo messages with a promotion of abortion.

“I am not surprised in any way that Ralph Northam is using pro-abortion activists in his ads,” Olivia Gans Turner, president of the Virginia Society for Human Life, told LifeSiteNews.

The abortion lobby “came out right up front swinging for their guy, Ralph Northam. So we’ve known from the beginning that they would use tricks like this,” she said.

“We knew that as the weeks drew closer to the election we would see these very nasty, obnoxious ads coming out that try to make Ralph look like he cares about women, that he cares about mothers,” said Turner. “We know that’s absolutely not true, because abortion is often as dangerous and sometimes as deadly for the mothers as it is for the babies.”

Race could come down to 'couple hundred votes'

“Planned Parenthood and the abortion industry (have) poured millions of dollars into this race and devoted plenty of volunteers to the campaign,” said Kristan Hawkins, president of Students for Life of America. “Yet the best person Northam could find to represent a regular voter is an abortion extremist.”

“Voters rejected letting Planned Parenthood and NARAL set up shop in the White House, and as Northam's desperation grows, it looks like Virginia voters are rejecting the singularly pro-abortion focus of the Northam campaign,” observed Hawkins.

“Ralph Northam is an abortion extremist who supports the Democratic Party position of abortion on-demand, up until the moment of birth, paid for by taxpayers,” said Mallory Quigley of the Susan B. Anthony List, which is running digital ads in support of Gillespie, Jill Vogel for Lieutenant Governor, and John Adams for Attorney General.

“His supporters include the most ardent pro-abortion activists from NARAL, Planned Parenthood, and the like. It is therefore no surprise to see an abortion backer like Erin Matson appear in his campaign ads, which have largely focused on attacking pro-life Ed Gillespie,” said Quigley.

Virginia has become increasingly “purple” rather than red in the past decade. Obama won Virginia in 2008 and 2012. Hillary Clinton won it in 2016. Virginia’s current governor, Democrat Terry McAuliffe, is strongly pro-abortion.

However, Republicans have a majority in the state legislature.

“Numbers are coming out that bring this race within a one-point advantage to pro-lifer Ed Gillespie,” said Turner. “Every single person who cares about protecting unborn children, the elderly, the disabled, or any other vulnerable population in this state is going to have to get to the polls.”

The race could even come down to “a couple hundred of votes,” she said, noting recent Virginia elections have become closer and closer.

Northam came under fire recently for removing his African-American running mate from some of his campaign materials to appeal to unions.