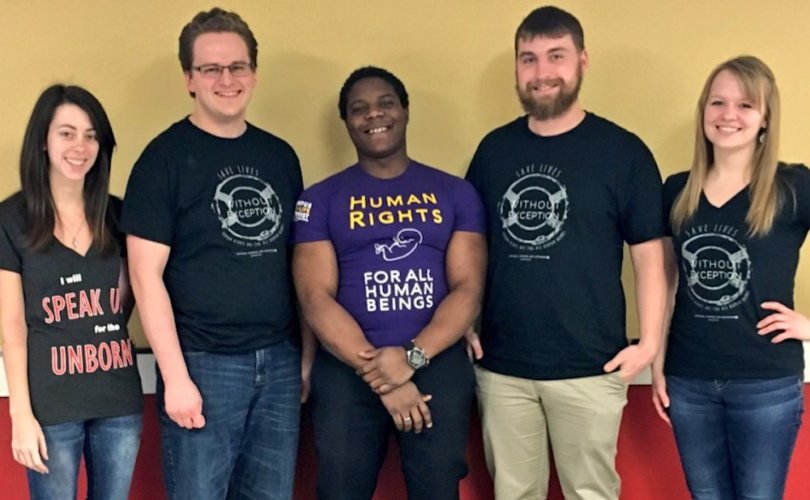 BRANDON, Manitoba, August 4, 2016 (LifeSiteNews) – Pro-life students at Brandon University are suing their student government for denying them club status on the grounds that their displays are “intimidating” and the abortion issue is already adequately covered by pro-abortion groups.

“Every organization is required by law to obey its own bylaws,” said John Carpay of the Justice Centre for Constitutional Freedoms, which is assisting the Brandon University Students for Life. “The student union’s own bylaws commit it to protect freedom of expression and yet here it is denying club status to the Students for Life solely on the grounds of ideology.”

Anastasia Pearse, executive director of National Campus Life Network, called it “unacceptable” that Brandon’s pro-life students had to go to court “to ensure they can enjoy the same freedoms as their peers on campus.” Pearse noted that pro-life students on four other Canadian university campuses are currently embroiled in similar court cases.

Carpay told LifeSiteNews that one of the arguments the student union used to justify its action was that the club was “redundant” because the abortion issue was adequately covered by the pro-abortion Women’s Collective. “That’s an absurdity,” Capray said. “It’s like denying the New Democratic Party students group club status because politics was already covered by the Young Conservatives.”

The Students for Life are seeking a court order to force BUSU to restore its club status, which entitles it to use both student union and university spaces to mount displays and give out information. The lawsuit claims BUSU’s decision to remove the group’s club status was “irrational, biased, arbitrary, and in breach of the requirements of procedural fairness.”

In fact, the club only found out when it applied later to use BUSA space for an event. BUSA did not respond to email requests for a meeting to discuss the loss of status. The meeting only took place after a chance encounter with a BUSA council member on campus. He told them that if they “changed their views” status would be restored.

Yet BUSA’s own constitution states that it recognizes “equal opportunity and fairness in all levels of the decision-making process” and “hereby implements the practice of impartial decision-making. Uncontested hearsay evidence, irrelevant to voting and decision-making, shall not bear significance when rendering decisions, and shall remain moot.”

BUSA’s leadership eventually met the Students for Life and disclosed their reasoning: first, “that Students for Life had violated the Respectful Environment Policy … by making students feel ‘uncomfortable’ with various events stating pro-life positions, which had triggered complaints from the “Women’s Collective;” second, by allegedly being “affiliated with a U.S. pro-life group;” third, by affiliation with “a Canadian pro-life group that BUSU ‘had issues with;’ fourth, that its position on abortion was opposed to that of the Canadian Federation of Students; and, fifth, that the group was unnecessary because the issues of suicide and abortion “were already being addressed by the BUSU’s LGBTQ Collective and Women’s Collective, respectively.”

Carpay told LifeSiteNews that BUSU’s own affirmation of freedom of speech open it up to a lawsuit by members whose freedoms it violated. “It cannot do anything it wants. It has to honor its own constitution and bylaws. Free speech and free inquiry are fundamental to the idea of a university.”

Added Catherine Dubois, the president of Brandon University Students for Life: “We feel marginalized, censored and discriminated against by BUSU. … We desire to express our views peacefully, but the BUSU’s obstruction and suppression … have significantly diminished our ability to do so.”

Ryerson Students For Life goes to court to get club status

Pro-life students take University of Alberta to court over $17,500 fee