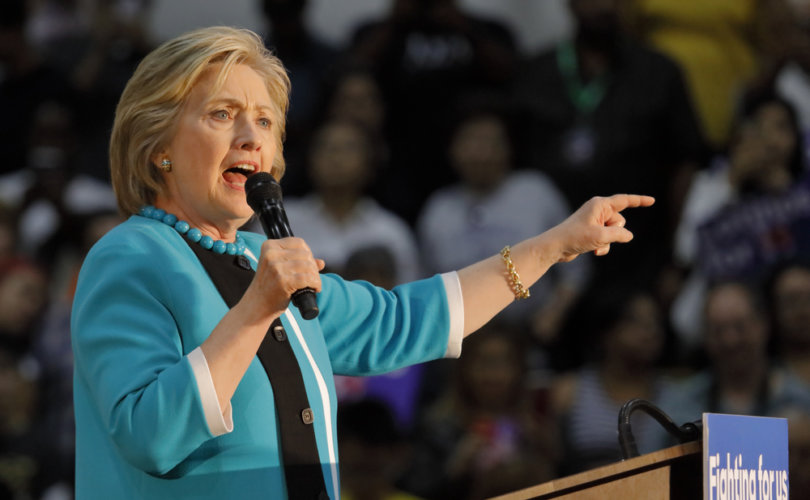 August 8, 2016 (LifeSiteNews) – A new video released today by American Values Action highlights an issue on which the media has been mostly silent – Hillary Clinton's abortion extremism as seen in her own words. AVA Senior Fellow Dr. Charmaine Yoest noted a profound difference between the Democratic nominee for president and Republican Donald Trump on the life issue.

“The reality is that Hillary Clinton supports abortion through all nine months of pregnancy up to the moments before birth,” said Yoest. “While the media is busy taking a joke Donald Trump made at a rally over a crying baby into national news, they are avoiding any reporting on Hillary Clinton's abortion extremism. Hillary Clinton's stance in favor of abortion rights is well known, but less well-known is just how extreme and unlimited her advocacy of abortion is. American Values Action is releasing a video today to make it easy to quickly educate on her record of promoting unfettered abortion – a position she has held over her entire lifetime.”

The approximately one-minute video highlights four issues: Clinton's belief in expanding taxpayer funding for abortion; her stunning statement that “deep-seated cultural codes, religious beliefs have to be changed;” her assertion that unborn babies have no constitutional rights whatsoever; and her repeated commitment to appoint only pro-abortion judges to the Supreme Court.

“Make no mistake: when Hillary Clinton says religious beliefs have to be changed — she means mainstream American voter's deeply held religious beliefs, not hers,” said Yoest. “On the issue of life and the kind of justices who will be appointed to the Supreme Court, Hillary Clinton and Donald Trump are directly opposite. This will be a mobilizing issue as more religious voters are educated about her record of abortion extremism.”