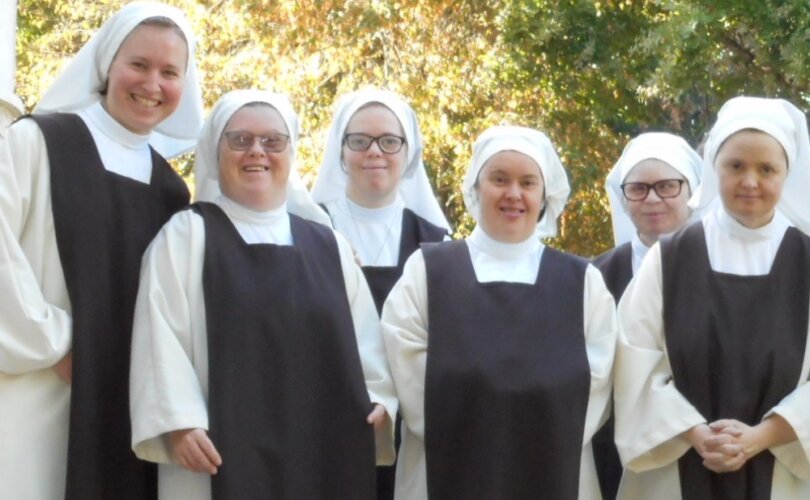 (LifeSiteNews) — A religious community in France is inviting American women to join their order as “able bodied” members to support its sisters, all of whom have Down syndrome.

Les Petites Soeurs Disciples de l’Agneau, or the Little Sisters Disciples of the Lamb, is the only religious order in the world to welcome women “affected by Down syndrome” as fully religious sisters. While the small community is founded on simplicity and creative work, the mission is limited by the handicap of the sisters’ conditions and is inviting American women without the same condition to discern a vocation with the order.

The order alludes to the words of Pope Saint John Paul II, describing the call of able-bodied women as one “to devote yourself to God with the smaller… in testimony to the [Gospel] of Life.” Like many religious orders, the Little Sisters Disciples of the Lamb provides opportunities for women to participate in a discernment retreat and requires a “period of Novitiate” prior to “taking temporary and permanent vows.”

Mother Line, the order’s prioress, told the Catholic News Agency that the order is seeking American women because the USA is more open to the idea that those affected by Down syndrome can be active members of the community.

READ: Idaho bill provides real help for parents after a Down syndrome diagnosis

— Article continues below Petition —
Stand with faithful Archbishop Timothy Broglio as the NEW President of the United States Conference of Catholic Bishops!
Show Petition Text
9173 have signed the petition.
Let's get to 10000!
Thank you for signing this petition!
Add your signature:
Show Petition Text

According to Mother Line, women who are called to serve alongside the Little Sisters must “be trustworthy and faithful” to effectively and charitably work within the community. The vocation is a “lifelong commitment” and provides a unique opportunity to learn from the sisters with Down syndrome.

“They’re very good at forgiving, and that’s a difficult one,” the prioress said. “They are teaching us how to be on the path to God.”

In addition to bringing American women into the order in France, Mother Line also expressed the hope that similar orders can be brought back to the U.S.

The Little Sisters Disciples of the Lamb was initially founded in 1985, when Mother Line met a woman with Down syndrome who “had already received her religious vocation” but “always received a refusal” from religious orders because of her condition.

“Mother Line fully understood that these communities had neither the infrastructure, nor a way of life adapted to the handicap of the women affected by Down syndrome,” according to the website. She “perceived a true vocation in the young Veronica” and began a community with the woman, who is now a nun.

Nearly 15 years later, the order was “established as a Religious Institute of contemplative life in 1999, by the Archbishop of Bourges, Monsignor Pierre Plateau.” Then, in 2011, the archbishop “officially approved the Constitutions of the Institute of the Little Sisters Disciples of the Lamb.”

The sisters live a contemplative lifestyle which is “regulated and disciplined by prayer and manual activities.” Their patron saints are Saint Thérèse of the Child Jesus and Saint Benedict. Besides prayer, the Little Sisters use their skills to create “ceramics, woven goods, pottery, herbal drinks and in the near future honey.”

“The fulfillment of this vocation is only possible because it is supported by able Sisters who have responded to the call of love for others, in dedicating their lives to God with their affected sisters to form one unique community with them.”

In recent months, parts of the U.S. have made significant efforts to protect and support people diagnosed with Down syndrome.

West Virginia lawmakers passed legislation in March which banned abortions sought for the purpose of killing a baby diagnosed with disabilities, including Down syndrome. Earlier this month, an American father, whose second child was diagnosed with the condition shortly after birth, assisted in the passage of the Down Syndrome Prenatal Education Act. This law requires that pregnant women are provided with positive information about the condition.