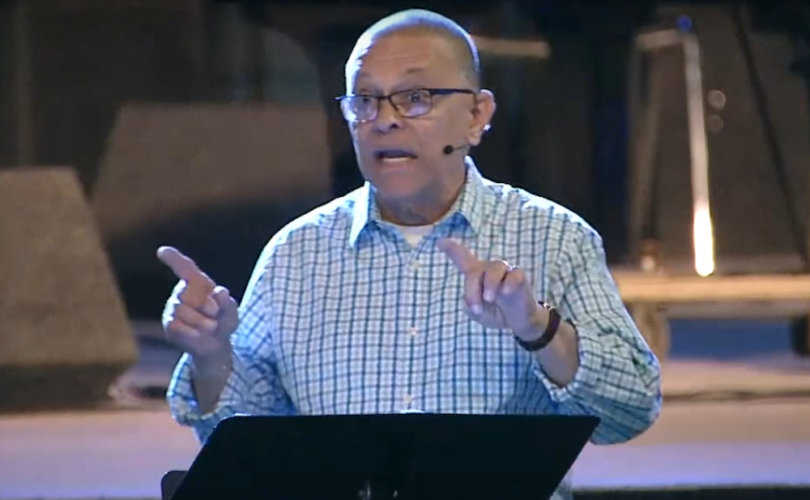 Dr. Orlando Espín is a University of San Diego professor and former priest who has actively served as a speaker and board member for pro-homosexual groups.YouTube

ANAHEIM, California, March 3, 2017 (LifeSiteNews) – Rather than help individuals find solutions for gender dysphoria, Catholic parish leaders were encouraged at a recent national workshop to incorporate “transgender” issues into religious education and preach at Mass about the “needs, concerns and joys of transgender people.”

In addition to proselytizing about transgenderism at Mass and other prayer gatherings, catechists at the Los Angeles Religious Education Congress (LA REC) workshop were encouraged to bring transgender people in for panel discussions and to “recognize” and/or have a parish presence at “public transgender events.”

“Transgender in the Family: One Bread, One Body” was a Saturday session at the Congress that ran February 24-26 with a related Youth Day before the general Congress.

“Transgender” session attendees learned how to “be sensitive, loving and supportive of transgender Catholics and their families in the midst of transition,” according to the workshop description, and were presented with a panel of “transgender” Catholics.

Gender dysphoria denotes the mental condition of gender confusion. And while the American Psychiatric Association changed the condition’s name from “gender identity disorder” after facing pressure from LGBT activists, it remains classified by the APA as a mental disorder.

The Church’s Catechism states, “Everyone, man and woman, should acknowledge and accept his sexual identity.”

It says as well that “the unity of body and soul is so profound” that a person’s biology as either male or female “forms a single nature” with their soul, rendering it impossible for them to exist in the ‘wrong’ body and thus impossible to change one’s sex.

All are welcome, the Catholic Church also says, though many define welcome to disregard the Church’s call to conversion. Many also mistake enabling of destructive behavior as being welcoming.

Pope Francis has criticized gender theory on several occasions, calling it an “error of the human mind that leads to so much confusion.”

In 2015, the U.S. bishops published a teaching document on gender ideology clearly identifying gender ideology as “a position on anthropology (who a human being is) that is in conflict with the Christian one.” The seven-page document was plainly critical of gender ideology throughout, citing the current and previous two pontificates, the Church's catechism, and documents from the Vatican and the USCCB.

Transgender “transitioning” critics contend that basic biology dictates that actual gender transformation is not possible because surgery and hormones will never fully replicate the anatomy and the functioning of the opposite sex.

Experts say as well that both “transitioning” and fostering gender confusion is actually detrimental and dangerous to a population already at high risk of suicide. So-called gender “transition” does not cure gender dysphoria, they say, leading to more negative results and regret.

An officially sanctioned catechetical conference put on by the Archdiocese of Los Angeles, the Congress has hundreds of workshops and speakers.

This year’s list of Congress presenters included Dr. Orlando Espín, a University of San Diego professor and former priest who has actively served as a speaker and board member for pro-homosexual groups.

Espin, who openly lives in a homosexual “marriage,” provided the following in his bio for the Lesbian, Gay, Bisexual and Transgender Archives Network:

“In August 2008, after fifteen years together, Orlando and his partner were legally married in California. As of 2016, they have been together for 23 years.”

Presenting on liturgy and music was David Haas. The contemporary composer made several troubling posts on Facebook last year, including one with an icon portraying homosexual predator Harvey Milk as a saint, and another critical of the Catholic bishops who have been vocally supportive of the Church’s teaching on sexuality.

Also presenting was Jesuit Father Gregory Boyle, a popular figure for his work with gangs and the poor who has nonetheless dissented on homosexual “marriage and women priests.

Facilitating at this year’s “transgender” workshop was Father Bryan Massingale, a priest of the Archdiocese of Milwaukee and professor of theology and social ethics at Fordham University known to dissent on homosexuality, gay “marriage,” and gender dysphoria.

At last year’s LA REC Father Massingale participated in a panel titled “Transgender in the Church: One Bread, One Body.”

Afterward, he wrote of two individuals with gender dysphoria who addressed the panel, saying he was “struck their heartfelt conviction that accepting their true gender identities led them to a deeper and more authentic relationship with God.”

Father Massingale’s co-presenter at the “transgender” workshop this year was Dr. Arthur Fitzmaurice, resource director of the Catholic Association for Lesbian and Gay Ministry and former co-chair of the Archdiocese of Los Angeles' Catholic Ministry with Lesbian and Gay Persons

This year’s session material said Fitzmaurice would “speak from lived experience to help us be sensitive, loving and supportive of transgender Catholics and their families in the midst of transition.”

Office of the Archbishop of Los Angeles