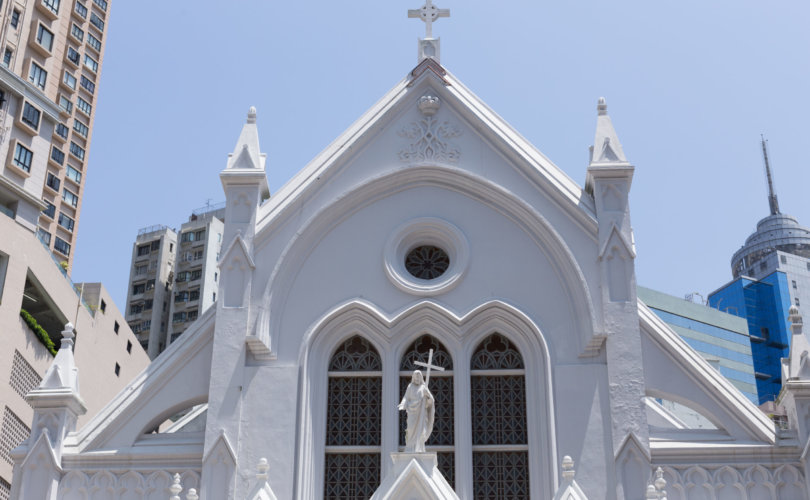 HONG KONG (LifeSiteNews) — A former unofficial Vatican representative in Hong Kong has reportedly warned Catholics in the region that the religious freedom it has enjoyed for years will imminently come to an end, according to a Reuters report published yesterday.

In the course of four meetings held between October 2021 and March 2022, Monsignor Javier Herrera Corona told Hong Kong’s 50+ Catholic mission groups to get ready for heightened control by the Chinese Communist Party (CCP) of Beijing, urging them to take measures to protect the Church’s temporal patrimony that was part of her missionary work: property, files, and funds of the missions.

According to Reuters, one of the persons present at these meetings summarized Herrera Corona warning to Hong Kong’s Catholic missions in these words: “Change is coming, and you’d better be prepared. Hong Kong is not the great Catholic beachhead it was.”

The long-foreseen crackdown of Beijing on the Catholic Church in Hong Kong began in earnest in 2019, which saw anti-communist demonstrations and arrests of pro-democracy civil activists. Among the citizens arrested was Hong Kong hero Jimmy Lai, an outspoken Catholic business who refused to be silenced by the CCP. This past May 2022, Cardinal Joseph Zen was arrested under pretense of violating the National Security Law, a law seen by many as a thinly veiled communist justification for a totalitarian police state that will silence any voice opposing the CCP.

According to the Reuters report, however, Herrera Corona’s “concerns went beyond the ongoing national security clampdown.” The envoy “warned that closer integration with China in coming years could lead to mainland-style restrictions on religious groups.”

Such restrictions on the mainland include the requirement for a priest to register with the government, run by the CCP, which since 2018 has been granted by Rome the power to nominate the candidates for episcopal consecration. The Vatican-Beijing deal, denounced numerous times by Cardinal Zen, has fueled further persecution of the underground Church and caused confusion among both clergy and lay faithful, who for decades refused membership in the official state-run church, often meeting martyrdom as a result.

As Reuters points out, “The Vatican has no official representation in China after diplomatic ties were cut in 1951 beyond the presence of two unofficial envoys in Hong Kong, who operate from a walled villa in a Kowloon suburb.”

In a December 2020 report on the arrest of two nuns who worked at the unofficial mission in the Kowloon villa, a Reuters investigation said that “the mission keeps such a low profile that it isn’t listed in the Roman Catholic Church’s formal directory of every priest and property in the city. The two monsignors who staff the outpost have no formal standing with Beijing or the Hong Kong government, and they don’t conduct official work, not even meeting Hong Kong officials. The tenuous foothold is a sign of the delicate position in China of the world’s largest Christian denomination, many of whose members in Hong Kong staunchly support the city’s democracy movement.”

At the time, the two nuns were arrested for three weeks on the mainland, then put on house arrest and forbidden to return to Hong Kong. All the while, Chinese security agents had tightened their surveillance of the Kowloon mission villa. Reuters reported that the arrests, which had gone unreported until then, were viewed by clerics in Hong Kong and the Vatican as “a sign Beijing wants the mission shut.”

According to yesterday’s report, in 2019 the Vatican envoys had begun transferring the mission’s archives from Kowloon to Rome, fearing too close a scrutiny by Chinese state security. Upon completion of the project, they had moved “half a tonne of files on the Catholic church’s activities in mainland China and Hong Kong.”

“The files dated back to the mid-1980s,” yesterday’s Reuters report detailed, “and mostly dealt with mainland China, including private communications with underground mainland clerics, missionary activity and details of persecution of Catholic faithful, according to two priests familiar with them.” Other missions have started a similar transfer of files overseas.

A priest from Hong Kong who asked to remain anonymous told LifeSiteNews that the Vatican envoy’s warnings are significant for several reasons: “First,” the priest said, “this is the first time ever that a Vatican official acknowledged that Hong Kong’s religious freedom is under severe threat. Second, it is clear the Vatican knows how dire the situation is; otherwise, they wouldn’t have started transferring the archive since 2019. Third, it shows the world why the Vatican should never strike any deal with this evil regime.”

Regarding the moving of the archive from the Kowloon mission, the priest added, “They started moving the archive in 2019, but publicly … the Vatican gave the impression that everything is normal [in the] Hong Kong Church. There’s some hypocrisy there.”

Yesterday it also was announced that the Pope hopes to renew the infamous Vatican-Beijing deal on the appointment of bishops for the Catholic Church in China. “The agreement is moving well and I hope that in October it can be renewed,” the Pontiff is reported to have said.

READ: Cardinal Zen offers Mass after his arrest, says ‘martyrdom is normal in our Church’

There are an estimated 400,000 Catholics in Hong Kong, many of whom are actively involved in work that aims at protecting the freedom of the Church. According to the December 2020 Reuters investigation into the Church in Hong Kong, “Catholic activists have been influential in the city’s protests and pro-democracy movement.”

The report noted, however, that such Catholics by that time no longer enjoyed the full support of their bishop, Cardinal John Tong Hon. “With Beijing’s crackdown on Hong Kong intensifying, Tong and his diocese leadership are now moving to curb these activist voices, including that of the Justice and Peace Commission.”

The December report related that Cardinal Zen at the time also noted the change in tune from diocesan authorities in relation to the CCP. “‘Apparently the authorities in the diocese have now decided to please the government by discouraging certain initiatives of the commission … rather than respecting the commission in doing its job according to the social teaching of the Church,’ said Cardinal Zen. ‘I’m afraid that a real persecution has already begun.’”

Cdl Zen: Vatican has delivered Church in China into ‘hands of the madness of our government’