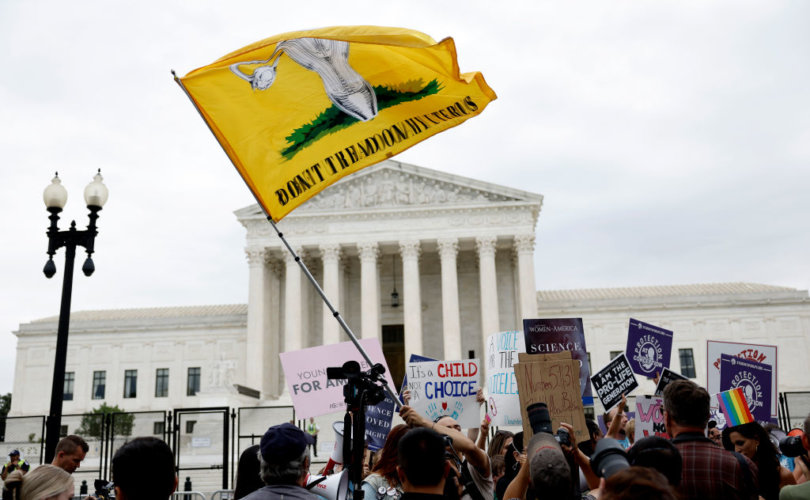 Pro-abortion activists wave a flag that reads "Don't tread on my uterus" outside of the U.S. Supreme Court on June 21, 2022, in Washington, D.C.Photo by Anna Moneymaker/Getty Images

INDIANAPOLIS, Indiana (LifeSiteNews) – The ACLU and abortion industry are resorting to a favorite last-ditch effort in an attempt to overturn a pro-life law passed by Indiana’s duly elected representatives.

The pro-abortion legal group wants a judge to rule that the state’s new law, which will shut down all abortion facilities in the state and is expected to eliminate 95 percent of abortions in Indiana, is in violation of the state’s Religious Freedom Restoration Act (RFRA).

The group filed a lawsuit on September 8 to stop the law, which goes into effect on Thursday.

Planned Parenthood and the Satanic Temple previously tried, and failed, to make the argument that a set of Missouri pro-life laws violated the federal RFRA.

That’s because state and federal RFRA laws do not give a broad liberty for someone to evade all laws simply by claiming it violates their religion, or whatever the Satanic Temple is supposed to be.

Put another way, the government entity has to show there is a good reason for a law and that there is no other way to enforce the law without violating someone’s religious liberty claims.

For example, if someone tried to claim that their religion required them to drive 150 miles per hour on the highway, a judge would likely find that the state must restrict this liberty because there is no other way to ensure safety on the roads than to enforce speed limits.

The Supreme Court ruled that Obamacare’s requirement that all business owners, even those who have religious objections to abortifacient birth control, failed to meet the “least restrictive means” test, under the federal RFRA.

The state has a “compelling government interest” in stopping the killing of preborn babies and the “least restrictive means” of doing that includes that pagans and “Unitarian Universalists” cannot claim their “religion” requires them to have abortions in some circumstances. Same goes for any Aztec who wants to challenge the state’s law against murdering born children.

The Court of Appeals of Indiana rejected in June a similar effort to broadly apply RFRA to violent conduct. In that case, a parent argued that “punching his children in the face, striking their heads with his elbow, and choking them” all fell under his religious right to discipline his children.

As a result, he wanted a court to throw out abuse convictions against him. But the appeals court ruled that “protecting the welfare of children” is a “compelling government interest.”

That’s why the lawsuit from the ACLU and “Hoosier Jews for Choice” and others should fail.

Attorneys are arguing on behalf of people who may need an abortion in the future on the basis that their religion allows for the killing of preborn babies in some cases.

The lawsuit also argues on behalf of pagans because they “demand, as part of their religious and spiritual tradition, that women have full bodily autonomy, free from interference from others.” The claim the ACLU makes to satisfy the “burden” test is to argue that the women, none of whom are currently pregnant, are avoiding pregnancy until they can have an abortion.

The new state law is “preventing them from obtaining abortions that are directed by their sincere religious beliefs.”

A pagan plaintiff argues that her anxiety over not being able to kill her own preborn baby “has resulted in a reduction in physical intimacy [with]…her husband” and this “is another form of impingement on her religious beliefs” because it makes it hard for her to feel “fully connected to and with her husband.”

The state, as it did in prosecuting the abusive father, can show that it has a “compelling government interest” in protecting human life – in 2018 Governor Eric Holcomb signed a law against feticide.

It also dedicates state resources to pregnancy risk and ensuring access to prenatal and postnatal care, including insurance and social services.

The ACLU’s claim should fail.