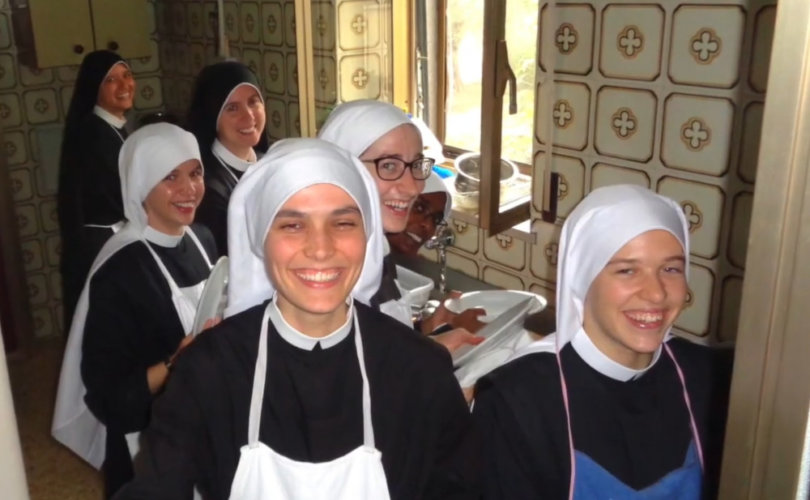 VIGNE DI NARNI, Italy, January 22, 2021 (LifeSiteNews) — A traditionalist community of Catholic sisters in Italy has had so many new postulants from the United States that it now needs to buy another, larger convent.

The Consoling Sisters of the Sacred Heart live packed three or four to a room in their old convent. The recent crowding is thanks to an unexpected bumper crop of vocations from the United States, including four young women from the same family.

If that were not astonishing enough, two other sets of “sister sisters” have joined the community: three young women from the Bissing family, and two from the Rosario clan. LifeSiteNews asked the “sister sisters” to tell us about their journey to religious life in Vigne di Narni, and they responded both individually and collectively.

Collectively, the Bomberger sisters told LifeSiteNews that their vocations to religious life were initially fostered by growing up in a big Catholic family with Catholic education, summer camps and spiritual retreats. They were also moved by the example of their parish priests and “their happiness in giving their lives for souls.” Later, they received help in their discernment through spiritual direction and visiting convents.

Many things had attracted them to the Italian order, founded in 1961 and now in the spiritual care of the SSPX: “The devotion to Our Lady and to the Sacred Heart, the family spirit, fraternal charity, the spirit of joy, the mission in India, love of the priesthood and the love and care put into the liturgy,” they said.

“The sisters, living for God, lose themselves in God and therefore, forgetting self, they live entirely at the service of God in their neighbor.”

“We left them only for a short time, to spend eternity together with them,” they added.

Meanwhile, they said that they have found the “peace of soul” that comes “when you say ‘yes’ to God.” There is the joy of mutual giving between the religious sister and God “who is never outdone in generosity.” There is also the consolation of living the vow of obedience.

“… [U]nder obedience, everything you do is the will of God,” they wrote. “Therefore, we are never [beset by the] uncertainties that come in everyday life.”

The Bomberger sisters described their life in the convent as living “on love” and becoming “‘drunk on God’, the only Person who can fulfil all the desires and longings of our hearts.”

Sr. Maria Veronica thinks her desire to give her life sprang from being the “oldest of a large family” who learned to give early on.

“In finding this community I found that its apostolate had no limits, it hit the bill and responded to all my aspirations and dreams,” she wrote.

“I found that in this little unknown community, the apostolate is vast and has no limits as long as there are vocations. The orphanage in India definitely attracted me the most.”

Sr. Maria Bernadette said that she was most attracted to the order because of its apostolate in helping priests. Being a nurse assistant, she was also drawn by its care for the elderly. But above all, she realized that “only Jesus” could satisfy her great desire for love, and so she chose religious life over marriage.

“I found true happiness,” she said.

Marcella decided to become a Consoling Sister after seeing her eldest sister’s clothing ceremony. In this ritual, the novice appears in a wedding dress and is offered to God at the altar by her father.

“I was touched,” she said. “[I saw the Sisters] in daily life, always happy in every circumstance with [their] one and only goal: to please God and love their neighbor for Him.”

“I was thirteen at the time but I had already made up my mind I too was going to be His little consoler. As soon as I completed my studies I asked to enter.”

Regarding their relationship as “sister sisters,” both said that their bond has deepened.

“As we grow in the religious life, that ‘natural bond’ has only grown into a closer supernatural tie,” wrote Sr. Maria Marcella. “This purified love unites us not only to each other, but to every single member of our ever-growing spiritual family.”

Sr. Maria Cecilia said their natural tie “brought to the convent is deepened in the most genuine of ways as we watch each other grow through the ups and downs of a solid community life in religion.”

“The consolations are made up of so many little things in everyday life such as a smile, a glance and all of the millions of unsaid understandings,” she continued.

Sr. Maria Marcella described life in their community as “a very even balance of prayer, study and work in its many diverse forms.”

“The heart and purpose of the consoling sister is her prayer life which unites her to her God and her Spouse,” she added. “Her faithful fulfilment of it completes the most important part of her day and her universal prayer reaches to the four corners of the world and includes every single person in it.”

Sr. Maria Cecilia said life in the community is “simple but sweet,” and also “rich in profundity,” requiring “a fortified will which must always desire to progress in union.”

And one bigger, battered convent!

When the first American postulant arrived in 2014, the Consoling Sisters paid homage to Our Lady of Guadalupe. Since then, American girls have not stopped coming. Now, the congregation has 45 members from 7 different countries — but 20 of them are American.

Not wanting to refuse vocations, the Consoling Sisters packed postulants wherever they could: They put bunkbeds in the bedrooms, in the workroom, and “even in the Superior’s office,” they wrote in a communique. Now, they are finally out of room, but young women still want to visit, so the Sisters have been looking for a new convent, one big enough to house a novitiate.

They credit St. Joseph for having found them one only 40 minutes from Vigne: a 17th century monastery once home to Capuchin friars, restored in 2000, with 30 bedrooms and 5 acres of land. Unfortunately, the building has been left unattended, and vandals have got in, smashing windows, stealing metal, and damaging the electrical workings. And even more daunting, the price of their hoped-for new home is €1,150,000.

“The Community, having no income, lives solely on Divine Providence and does not have the means to pay this price,” the Consoling Sisters wrote to their supporters.

“Therefore, the Community turns to you, dear benefactors, asking you to be instruments in the Hands of God to offer to His future spouses a place where, in silence, obedience and fraternal charity, they can learn how to become true Religious who console the Heart of Jesus and spread the devotion to Him through the whole world.”

Time is of the essence in the purchase, as the first payment is due in February, and the balance in May 2021.

Would-be benefactors can now help the “sister sisters” (and their Sisters) buy their convent through LifeSiteNews’ new initiative, LifeFunder. The Consoling Sisters also have their own fundraising page here. Other options include direct deposit, PayPal, or mail.

Checks can be sent to:

For direct deposits, banking has been set up with Global Credit Union, Account #: 789174207173; Routing #: 325180595. For a tax deductible receipt, benefactors should email their name, address, and the date and the amount of their donations to [email protected]sters.org.