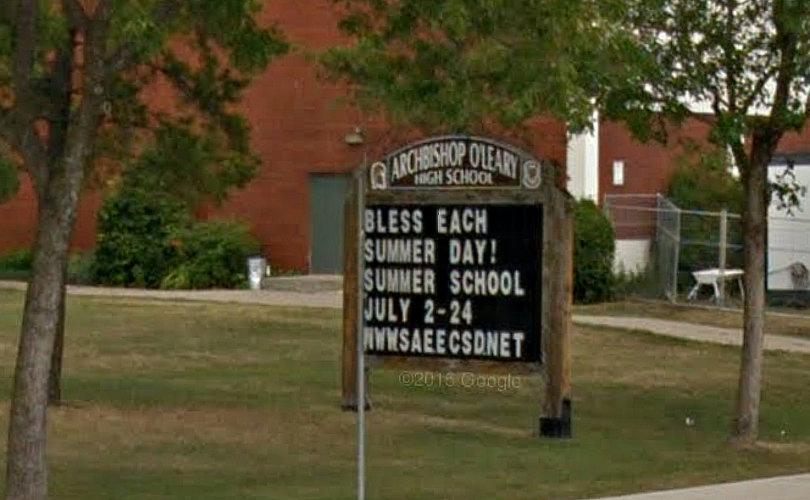 EDMONTON, Alberta, June 20, 2016 (LifeSiteNews) — Two teens raised by a lesbian couple and attending a Catholic school in Edmonton, Alberta have complained against a religion teacher for allegedly telling the students in class that homosexuals can’t reproduce and that they are not married according to Catholic teaching.

The Edmonton Catholic school board has now removed the teacher from the school – temporarily, at least for the time being – and launched an investigation into the allegations.

When students Tayler and Tyrus Allen told their mom, Elyssa Allen, and her partner Leigh Sylvester, to whom she is legally married, about the class given by 32-year veteran teacher Albert Felicitas at Archbishop O'Leary High School last month, the couple decided to take action, telling the teens to complain to the school principal, reported Edmonton Journal.

Allen said that while she is aware that the Catholic Church does not recognize her marriage, she “can’t accept such overt anti-gay messages being taught,” in the words of the Journal.

A number of Catholic students also from the school told the Edmonton Journal that the words of their religious teacher about homosexuality got them “fairly angry” and that they “didn’t sit well with me.”

“It got me fairly angry. In these times, we should be able to accept that homosexuals do exist and they should be able to marry and do the same thing that straight couples do. It was very alarming,” said student Mario Bacic.

LifeSiteNews contacted Edmonton Archbishop Richard Smith, but spokeswoman Lorraine Turchansky said that the archbishop would not be making any comment on the matter.

Felicitas said that the complaint about his class was a “total shock” to him.

“I’ve taught the course many times … I have received glowing evaluations from students,” he said.

Felicitas said he was simply teaching the position on marriage and sexuality as put forward by the Canadian Catholic bishops in a document.

Felicitas also protested the interpretation being put on his remarks, including claims that he said homosexuals don't deserve love.

“Everyone is made for love and to be loved and everyone is capable of love, no matter what gender choice you have,” he said.

When the Edmonton Journal asked students about their opinion of the teacher, some complained about his “hatred of abortion, even in cases of rape.”

The Catholic Church teaches that since every life is sacred, and abortion is wrong in any instance, including in the case of rape.

When LifeSiteNews contacted the board on Friday to ask for details, spokeswoman Lori Nagy replied that the investigation had been completed, but it would not release any findings.

“As with all personnel matters, we respect the privacy of the teacher involved and do not release findings publicly,” she said.

Attempts by LifeSiteNews to reach Felicitas were unsuccessful.

Felicitas told the Edmonton Journal two weeks ago that being a math teacher in today’s pro-homosexual climate was safer than being a religion teacher.

“Teaching religion, if you really want to teach it properly, it’s risky. I’d rather teach math because five times five is always going to be 25,” he said.