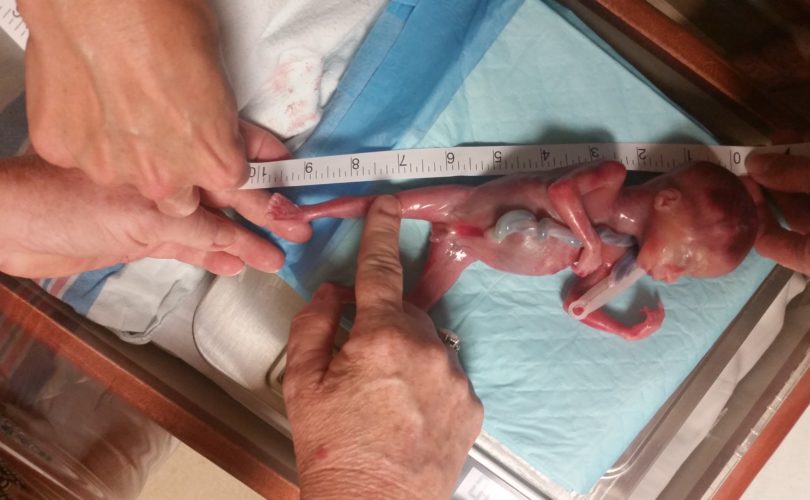 In 2012, KCTV reported that a new mother was been banned from Facebook for the photos she posted of her newborn son.

Grayson James Walker was born on February 15, 2012. He was born with anencephaly, a rare neural tube birth defect in which a baby is born without parts of the brain and skull. Action News 5 shared the Walker’s story about their son's eight hours of life shortly after he died.

Heather Walker then posted pictures of Grayson without his hat on.

“Not long after, Facebook deleted them because of the content,” she said. “They allow people to post almost nude pictures of themselves, profanity, and so many other things, but I’m not allowed to share a picture of God’s beautiful creation.”

When Walker and her Facebook friends decided to re-post baby Grayon’s photos in protest, the mother was placed on a 24-hour ban from the social networking website.

“I see all kinds of stuff, women’s body parts, almost nudity, which is one of their standards, people cursing each other out, just profanity,” said Walker.

Amazed at the amount of support she received from all over the country, Walker says the photo is raising awareness.

“Just in two days, all these people have messaged me telling me how much God has used Grayson’s life to touch them and to work in their hearts and to make them appreciate the children they have, that they have healthy children,” she explained.

Facebook later apologized to the family. “Upon investigation, we concluded the photo does not violate our guidelines and was removed in error,” Facebook said in a written statement.

“At first, I questioned God and wondered why he would choose us for this,” said Heather Walker.

Sixteen weeks into her pregnancy, Heather Walker found out her baby had a fatal birth defect.

“They of course gave us the option to terminate,” said Heather Walker.

The Walkers chose to carry Grayson to full term. Heather Walker said she turned to her faith to prepare herself for the days ahead.

“My husband and I, we started prayer and we knew that God knew since the beginning of time that he had us for this,” said Heather Walker.

Read: Twenty reasons to think twice about aborting a baby with anencephaly

“Honestly, just seeing the strength that she had motivated me to be a better husband and a better father to my kids,” said Patrick Walker.

“As soon as they brought him around to me, all those fears and everything were taken away,” she said.

With the help of non-profit organization, Now I Lay Me Down To Sleep, the Walker family had a photographer capture the hours they had with baby Grayson.

By treating his birth like any other special delivery, the Walkers hope to keep Grayson’s memory alive forever.

“Yes, I’m going to cry and I’m probably going to lay in my bed some days, but I have that hope that God has got him in his hands and we’re going to get to meet him again someday,” said Heather Walker.

“You know, my son lived almost eight hours, and he’s already done in eight hours what I could never do in a hundred lifetimes, and that’s awesome,” said Patrick Walker.

Grayson was the family’s third child.

“Just in two days, all these people have messaged me telling me how much God has used Grayson’s life to touch them and to work in their hearts and to make them appreciate the children they have, that they have healthy children.”

Reprinted with permission from the Saynsumthn blog.