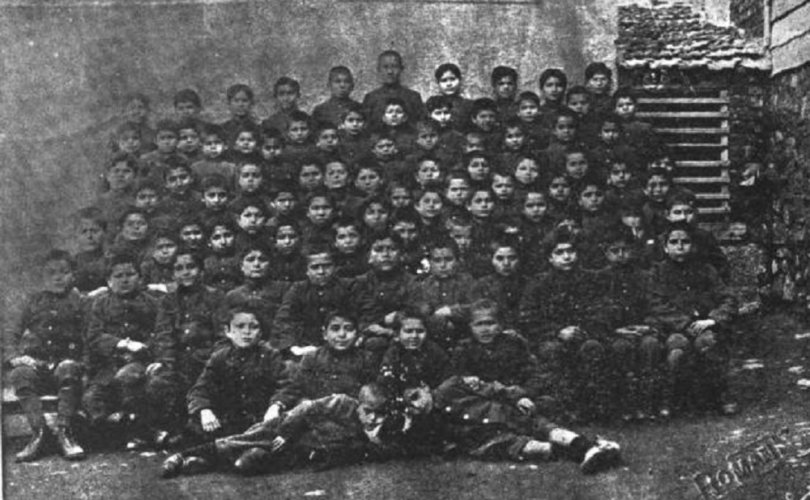 Orphans from the Armenian Genocide of the early 20th century.

May 10, 2019 (American Thinker) — Last April 24 was Armenian Genocide Remembrance Day. Millions of Armenians around the world remembered how the Islamic Ottoman Empire killed — often cruelly and out of religious hatred — some 1.5 million of their ancestors during World War I.

Ironically, most people, including most Armenians, are unaware that the first genocide of Christian Armenians at the hands of Muslim Turks did not occur in the twentieth century. Rather, it began in 1019 — exactly one thousand years ago this year — when Turks first began to pour into and transform a then much larger Armenia into what it is today, the eastern portion of modern-day Turkey.

Thus, in 1019, “the first appearance of the bloodthirsty beasts … the savage nation of infidels called Turks entered Armenia … and mercilessly slaughtered the Christian faithful with the sword,” writes Matthew of Edessa (d. 1144), a chief source for this period. Three decades later, the raids were virtually nonstop. In 1049, the founder of the Turkic Seljuk Empire himself, Sultan Tughril Bey (r. 1037–1063), reached the unwalled city of Arzden, west of Lake Van, and “put the whole town to the sword, causing severe slaughter, as many as one hundred and fifty thousand persons.”

After thoroughly plundering the city — which reportedly contained eight hundred churches — he ordered it set ablaze and turned into a desert. Arzden was “filled with bodies,” and none “could count the number of those who perished in the flames.” The invaders “burned priests whom they seized in the churches and massacred those whom they found outside. They put great chunks of pork in the hands of the undead to insult us” — Muslims deem the pig unclean — “and made them objects of mockery to all who saw them.”

Eight hundred oxen and forty camels were required to cart out the vast plunder, mostly taken from Arzden's churches. “How to relate here, with a voice stifled by tears, the death of nobles and clergy whose bodies, left without graves, became the prey of carrion beasts, the exodus of women … led with their children into Persian slavery and condemned to an eternal servitude! That was the beginning of the misfortunes of Armenia,” laments Matthew. “So, lend an ear to this melancholy recital.”

Contemporaries confirm the devastation visited upon Arzden. “Like famished dogs,” writes Aristakes (d. 1080), an eyewitness, “bands of infidels hurled themselves on our city, surrounded it and pushed inside, massacring the men and mowing everything down like reapers in the fields, making the city a desert. Without mercy, they incinerated those who had hidden themselves in houses and churches.”

Similarly, during the Turkic siege of Sebastia (modern-day Sivas) in 1060, six hundred churches were destroyed, and “many [more] maidens, brides, and distinguished ladies were led into captivity to Persia.” Another raid on Armenian territory saw “many and innumerable people who were burned [to death].” The atrocities are too many for Matthew to recount, and he frequently ends in resignation:

Who is able to relate the happenings and ruinous events which befell the Armenians, for everything was covered with blood[.] … Because of the great number of corpses, the land stank, and all of Persia was filled with innumerable captives; thus this whole nation of beasts became drunk with blood. All human beings of Christian faith were in tears and in sorrowful affliction, because God our creator had turned away His benevolent face from us.

Nor was there much doubt concerning what fueled the Turks' animus: “This nation of infidels comes against us because of our Christian faith and they are intent on destroying the ordinances of the worshippers of the cross and on exterminating the Christian faithful,” one David, head of an Armenian region, explained to his countrymen. Therefore, “it is fitting and right for all the faithful to go forth with their swords and to die for the Christian faith.” Many were of the same mind; records tell of monks and priests, fathers, wives, and children, all shabbily armed but zealous to protect their way of life, coming out to face the invaders — to little avail.

Anecdotes of faith-driven courage also permeate the chronicles. During the first Turkic siege of Manzikert in 1054, when a massive catapult pummeled and caused its walls to quake, a Catholic Frank holed up in with the Orthodox Armenians volunteered to sacrifice himself: “I will go forth and burn down that catapult, and today my blood shall be shed for all the Christians, for I have neither wife nor children to weep over me.” The Frank succeeded and returned to gratitude and honors. Adding insult to injury, the defenders catapulted a pig into the Muslim camp while shouting, “O sultan [Tughril], take that pig for your wife, and we will give you Manzikert as a dowry!” “Filled with anger, Tughril had all Christian prisoners in his camp ritually decapitated.”

Between 1064 and 1065, Tughril's successor, Sultan Muhammad bin Dawud Chaghri — known to posterity as Alp Arslan, a Turkish honorific meaning “Heroic Lion” — “going forth full of rage and with a formidable army,” laid siege to Ani, the fortified capital of Armenia, then a great and populous city. The thunderous bombardment of Muhammad's siege engines caused the entire city to quake, and Matthew describes countless terror-stricken families huddled together and weeping.

Once inside, the Islamic Turks — reportedly armed with two knives in each hand and an extra in their mouths — “began to mercilessly slaughter the inhabitants of the entire city … and piling up their bodies one on top of the other[.] … Beautiful and respectable ladies of high birth were led into captivity into Persia. Innumerable and countless boys with bright faces and pretty girls were carried off together with their mothers.”

The most savage treatment was always reserved for those visibly proclaiming their Christianity: clergy and monks “were burned to death, while others were flayed alive from head to toe.” Every monastery and church — before this, Ani was known as “the City of 1,001 Churches” — was pillaged, desecrated, and set aflame. A zealous jihadi climbed atop the city's main cathedral “and pulled down the very heavy cross which was on the dome, throwing it to the ground,” before entering and defiling the church. Made of pure silver and the “size of a man” — and now symbolic of Islam's might over Christianity, the broken crucifix was sent as a trophy to adorn a mosque in modern-day Azerbaijan.

Not only do several Christian sources document the sack of Armenia's capital — one contemporary succinctly notes that Muhammad “rendered Ani a desert by massacres and fire” — but so do Muslim sources, often in apocalyptic terms: “I wanted to enter the city and see it with my own eyes,” one Arab explained. “I tried to find a street without having to walk over the corpses. But that was impossible.”

Such is an idea of what Muslim Turks did to Christian Armenians — not during the Armenian Genocide of a century ago, but exactly one thousand years ago, starting in 1019, when the Turkic invasion and subsequent colonization of Armenia began.

Even so, and as an example of surreal denial, Turkey's foreign minister, capturing popular Turkish sentiment, recently announced, “We [Turks] are proud of our history because our history has never had any genocides. And no colonialism exists in our history.”

Note: The first Turkic invasion of Armenia (and others) is documented in Raymond Ibrahim's recent book, Sword and Scimitar: Fourteen Centuries of War between Islam and the West. American Thinker reviews of the book can be read here and here.