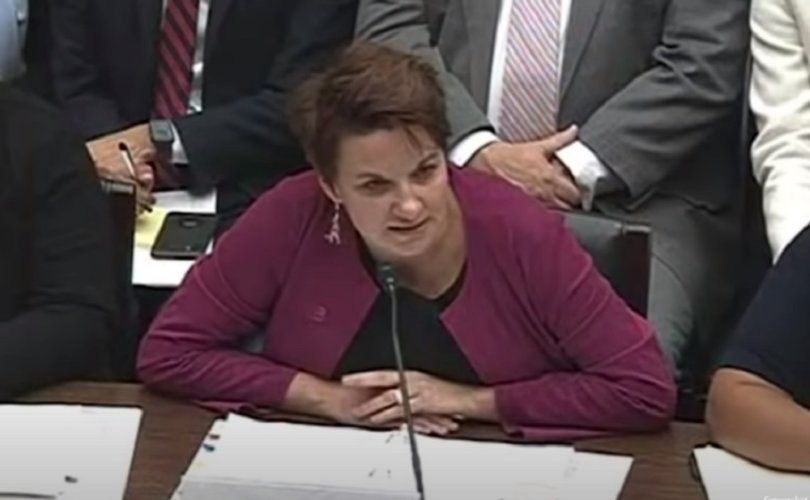 November 2, 2020 (Live Action News) — The abortion industry often recycles several claims — one: abortion is health care, and two: late-term abortions rarely, if ever, happen. Both claims are false, and abortion advocates will only admit to that if absolutely forced to. An exchange between Rep. Thomas Massie (R-Ky.) and Planned Parenthood abortionist Colleen McNicholas in November of 2019 showed just how out of touch the abortion industry is with the general public, and how reticent they are to admit the truth of what they’re doing.

McNicholas, the chief medical officer for Planned Parenthood of the St. Louis Region and Southwest Missouri (PPSLR), was called last year to testify before the U.S. House Committee on Oversight and Government Reforms proceedings, where she was questioned by Massie. At every turn, she avoided giving a direct answer. Massie began by asking what the medical consensus for the age of viability is. “So, viability is a complicated medical construct,” McNicholas said. “There is no particular gestational age. There are some pregnancies in which a fetus will never be viable. There are a number of different factors that we think about when we’re considering if a pregnancy is or isn’t viable.”

— Article continues below Petition —
PETITION: Support Lubbock, Texas in becoming a Sanctuary City for the Unborn!
Show Petition Text
4131 have signed the petition.
Let's get to 5000!
Thank you for signing this petition!
Add your signature:
Show Petition Text

Since launching this petition less than 6 weeks ago, two massive, yet conflicting, events have taken place surrounding this petition which asks the Lubbock City Council to make Lubbock a Sanctuary City for the Unborn:

1) Planned Parenthood just reopened their doors at the end of last week. However, the facility will not commit abortions until 2021 (if at all!).

2) Pro-life citizens of Lubbock have presented over 5,000 signatures to the Lubbock City Council, asking the Council to bring the Sanctuary City for the Unborn ordinance to a public vote.

This last part is great news! If the council passes the policy, Planned Parenthood will be barred from committing abortions in Lubbock. If the council fails, citizens will be able to directly vote on becoming a Sanctuary City for the Unborn in an upcoming election.

“Lubbock must not surrender to the abortion industry. Now more than ever, Texans must stand for Life and urge the council to swiftly pass the Sanctuary City for the Unborn ordinance,” stated Kimberlyn Schwartz, native West Texan and Texas Tech alumna, now serving as Texas Right to Life’s director of media and communication.

Please continue to SIGN and SHARE this petition, to support the goal of making Lubbock a Sanctuary City for the Unborn. Thank you!

Seven years after closing their doors, Planned Parenthood has announced that they intend to reopen in Lubbock, Texas, by the end of this year.

This is terrible news and a retrograde step...and, needs to be stopped!

That's why LifeSite and Texas Right to Life are partnering on this urgent petition which calls on the Lubbock City Council to make their city a Sanctuary City for the Unborn, thereby stopping Planned Parenthood from reopening their abortion center.

Since 2013, when Planned Parenthood closed their Lubbock facilities in response to laws passed by the Texas Legislature, an estimated 1,000 Lubbock babies have been saved from abortion!

But now, with $9 million pledged from wealthy pro-abortion leftists, Planned Parenthood is reopening in the region, according to their recent press release.

This is outrageous, and we must do everything possible to stop the killing from starting again!

Please SIGN this petition to the Lubbock City Council and urge them to make their city a Sanctuary City for the Unborn.

The Sanctuary City for the Unborn initiative began last year in the small East Texas town of Waskom. Since then, more than a dozen communities have followed suit.

The local Pro-Life ordinances declare abortion to be murder and prohibit abortion facilities from opening within city limits.

By encouraging the City Council to make Lubbock a Santuary City for the Unborn, we can stop Planned Parenthood before they kill another single baby in West Texas again!

But, we need your help to overcome some political opposition to this good idea.

Dan Pope, the mayor of Lubbock, expressed opposition to pursuing the Sanctuary City for the Unborn ordinance, stating, “That's not the lane we need to be in, we need to do the things that we were elected to do.”

Then, the mayor actually compared opening an abortion facility to opening a church: “I think telling Planned Parenthood they can't come to Lubbock would be in some ways like telling United [Supermarkets] they couldn't build another store, or telling the [Southern Baptist Convention] they couldn't do another church start in Lubbock..."

But, opening a Planned Parenthood abortion center is nothing like opening a church! There are no similarities between intentionally killing innocent preborn human beings and trying to teach people about the Bible!

Suffice it to say: Lubbock city officials need to hear from you!

Please add your voice by SIGNING this urgent petition to keep Planned Parenthood out of Lubbock.

**And, Lubbock citizens, stay tuned for additional steps to make your town a Sanctuary City for the Unborn.**

'Petition asks Lubbock City Council to declare their city a sanctuary for the unborn' - https://www.lifesitenews.com/news/petition-asks-lubbock-city-council-to-declare-their-city-a-sanctuary-for-the-unborn

Despite McNicholas’s claim, the current medical consensus is that a preborn child is considered to be viable at approximately 24 weeks, though with medical advancements, premature infants are surviving at younger and younger ages. Babies born as young as 21 weeks have a chance of surviving if given proper medical care.

“So, my practice includes the provision of abortion up until the point of viability, and again, we already had a discussion about viability not being… ” she said, drifting off as Massie then asked her to give a number in weeks, to which she said she didn’t know and didn’t recall what age limit her facility sets for abortions, or the size of the largest baby she’s aborted. Considering McNicholas is the chief medical officer for the facility, the idea that she is unaware of such things is highly unlikely, yet she stated, “I’m not sure how I would even quantify that.”

“You have no idea the age or gestation period of the fetuses you’re aborting?” Massie asked incredulously, but McNicholas continued to evade the question.

“So again, as I said, my practice includes abortion care through the point of viability, and as we previously discussed, that could be at any point,” she said. Yet according to the PPLSR website, Missouri only permits abortions up until 21 weeks and six days after a woman’s last menstrual period, so the answer should, theoretically, be easy — unless McNicholas’s facility is breaking the law. On a wider scale, Planned Parenthood does commit abortions past viability at facilities across the country, where laws do not prohibit them from doing so.

Massie then asked if there was any point in pregnancy at which McNicholas would personally refuse to commit an abortion, and McNicholas again avoided a direct answer. “Medicine is not black and white. I recognize in my 10 years of practice informs this opinion, that pregnancy can be really complicated, and given that there are pregnancies for which a fetus may never be viable, I think it’s really important that we allow physicians and patients to have every medical resource to make decisions that are appropriate to them and their health,” she said, then continued on to claim that women don’t need a reason for an abortion. “Every patient is different… I think you’re forgetting that there are a number of reasons that go into patients’ choice. At my clinic, I trust that women have a valid reason; every reason that they have is valid.”

She concluded, “Mr. Massie, abortion is moral, it is important, it is health care, and I support people being the experts in their own lives and making decisions for themselves.”

Though McNicholas believes taking the life of a human being is moral, the majority of Americans disagree with her, according to Gallup polling. Abortion is also not health care as she claims, because deliberately taking human life cannot, under any definition, be reasonably considered “health care” and is also never medically necessary. Polling has also found that few Americans support Planned Parenthood’s views about abortion; only 12% of Americans support abortion with no restrictions, and the majority of Americans favor heavy restrictions on abortion.

McNicholas also left out important details about the quality of the so-called “health care” she provides at her facility. Since 2009, at least 75 women have been injured there, including one woman who was almost killed. There is a woman sent to the hospital by ambulance every six weeks on average from the facility. There have also been numerous health and safety violations found, including not washing hands between glove changes and violating infection protocol.

McNicholas is thought to be splitting her time between the facility in St. Louis and a new mega-facility in Fairview Heights, Illinois, right across the state border where a woman was injured within a week of the facility’s opening.