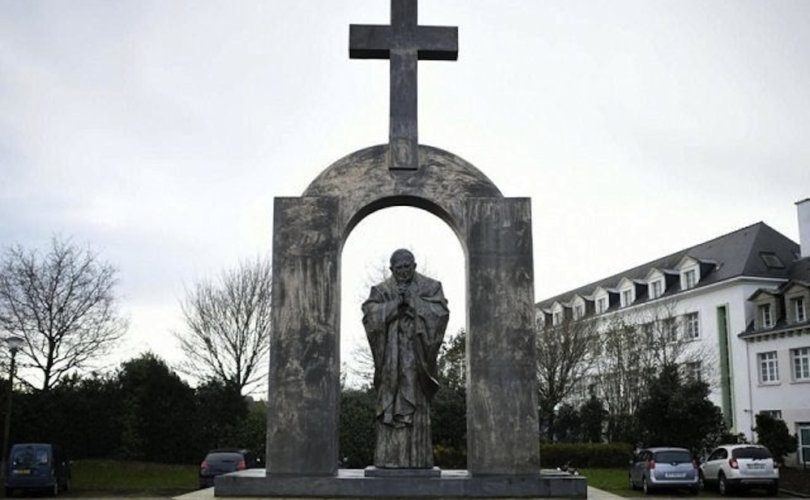 PLOERMEL, France, October 31, 2017 (LifeSiteNews) — A French court has ordered the removal of a cross from a memorial of Saint John Paul II.

The memorial, which depicts the Polish pontiff, was donated to Paul Anselin, then the Mayor of Ploërmel, in 2006 by its creator, the Georgian-Russian artist Zurab Tsereteli. It has been a fixture in the town square ever since.

The Conseil d’Etat, France’s highest administrative court, ruled last Wednesday that the cross surmounting the memorial violates a 1905 law forbidding religious monuments or symbols in any public place that is not a museum, cemetery, or place of worship. Wednesday’s ruling softened the judgment of 2015, then under appeal, that the entire memorial violated the law and had to be removed.

The past 200 years have witnessed frequent clashes between the French state and its Christian heritage. Roman Catholicism was the state religion of France before the Revolution of 1789, and after the bloodshed of the Terror that followed, Napoleon Buonaparte re-established the Church as the national religion in the Concordat of 1801.

However, the Paris Commune of 1871 proclaimed France a secular state, and in 1879 the French government began a program of national secularization, beginning with the expulsion of priests and nuns from the hospitals their orders had founded. Other laws replacing Christian values with republican ideals, including divorce and Sunday trading, followed. The 1905 Law of Separation of the Churches and the State, while retaining state ownership of churches, underscores the secularism of the French government and its public institutions.

Ploërmel, a medieval town in Brittany, has six months to remove the cross from the public square, and it must pay €3000 (approx. $3,500 US dollars) to the so-called National Federation of Free Thought, the humanist organization that led the fight against the memorial.

The National Federation of Free Thought has been active in removing nativity scenes from public places in France.

The current Mayor of Ploërmel, Patrick Le Diffon, is not satisfied with the ruling. He observed that the statue — with its cross — had been a part of his town for 12 years, hasn’t disturbed the locals, and is a tourist asset. This last point has been underscored in the last few days, as French tourists and Polish reporters crowd into the square to photograph its controversial resident.

The ruling has offended the saint’s fellow Poles. Polish Prime Minister Beata Szydło suggested that the order to deface the memorial was a kind of anti-European totalitarianism:

“John Paul II said that history teaches that democracy without freedom transforms into open or disguised totalitarianism,” she told the Polish Press Agency. “Our great Pole, our great European, is a symbol of a Christian, united Europe. The dictate of political correctness — the secular state — introduces a place for values that are alien to our culture, (and) which lead to terrorism to the daily life of Europeans.”

Szydło said the Polish government would endeavor to save the monument to its countryman from “censorship” and propose moving it to Poland, with the permission of French authorities and the local community.

The Mayor of Ploërmel may have come up with another solution, however. The UK Telegraph reported that Le Diffon plans to sell the town square to a private investors, “thus circumventing the problem” of a cross appearing on public land.