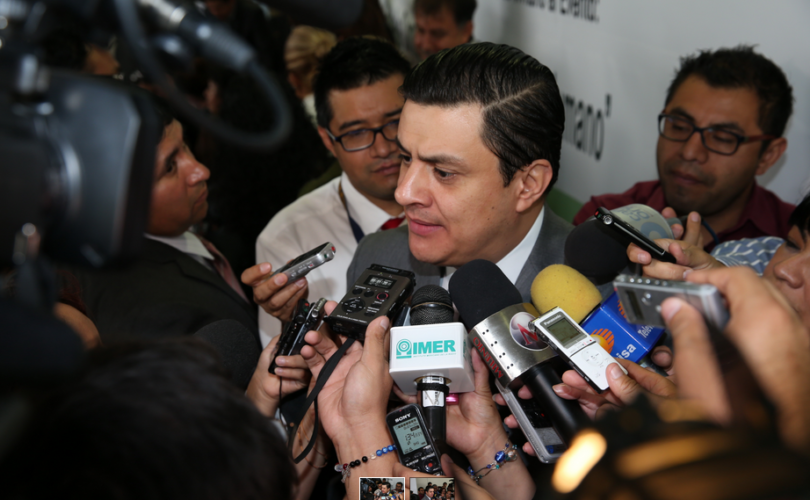 Jose Maria Martinez announces the formation of the Committee for Family and Human Development on June 12 in Mexico City.Mexico Senate website

Mexico City – Pro-homosexual and pro-abortion activists are demanding the expulsion of Mexican senator Jose Maria Martinez from the country’s senate for questioning homosexual “marriage” in recent statements made to the press.

“We have to go back to those natural bonds which have integrated this concept [of family], this community of love and solidarity,” said the senator during the founding ceremony of the Committee for Family and Human Development, on June 12. The traditional family, he said, “has prevailed throughout history and has resisted fashions and trends.”

In response to the senator’s words, a coalition of groups spearheaded by the socialist Party of the Democratic Revolution has initiated a petition asking for Martinez’s expulsion from the senate, and seeking the abolition of the senate’s Family and Human Development committee, which Martinez chairs.

Mexico’s National Committee for the Prevention of Discrimination, called the senator’s opinions “unacceptable” and “grave,” as well as “very preoccupying in a democratic society that seeks plurality.” They said that Martinez’s committee should “proceed with respect to human rights and without discrimination.”

Deputy Martha Micher from the Party of the Democratic Revolution (PRD) said the new committee was “intolerant” and, according to the local newspaper, Milenio, expressed her intentions to “bring it down.”

“It is shameful that a committee as the one for Family and Human Development, which is fascist, promotes persecution against homosexuals and lesbians and against those women who decide to legally interrupt their pregnancy,” said senator Angelica de la Peña, also from PRD during a press conference.

De la Peña said the newly founded committee reminded her of “Nazi Germany in 1936, in which Himmler decided to create a committee that had the particular characteristics of persecuting homosexualism and women who aborted.”

The online platform CitizenGO.org is collecting signatures of people asking senators to allow the Committee to remain within the senate. “Mexico cannot be subdued to censorship,” reads the petition, calling the motion to dissolve the committee a “gay inquisition.”

Three lesbian couples also started a petition on Change.org asking for the dissolution of the Family and Human Development Committee, arguing that “family is a social entity in constant change.”

Both sides will hand over their collected signatures to the Senate today.