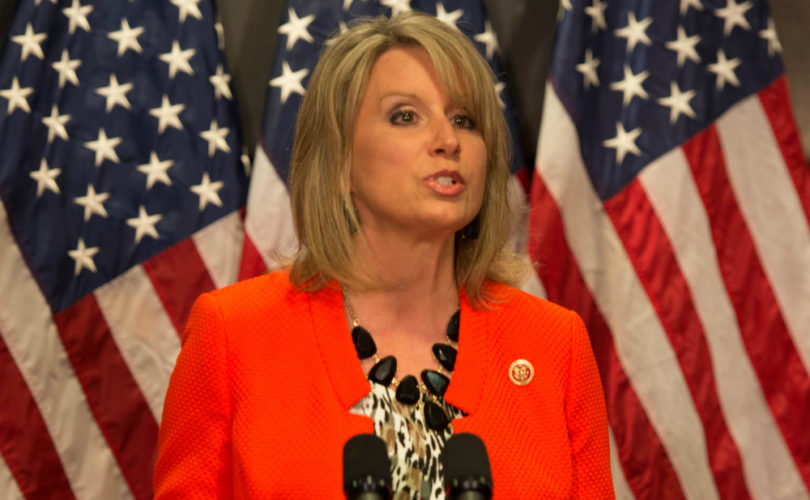 'I am appalled by the abhorrent and childish behaviors from some of the leaders of the outside groups,' Ellmers said of pro-life critics.Ellmers' Flickr stream

WASHINGTON, D.C., February 3, 2015 (LifeSiteNews.com) — Congresswoman Renee Ellmers has said that pro-life reaction to her killing a national 20-week abortion ban has been “abhorrent and childish.”

Ellmers has defended her parliamentary actions that effectively canceled a vote on the Pain Capable Unborn Child Protection Act on the morning of the March for Life – lashing out at Republican leaders and the pro-life movement. She insisted she acted “as any member of Congress should do when apprehensive with language in a bill.”

“I remain disappointed that the concern for the language of mandatory reporting of rape to law enforcement held by House Republican women and many men were not addressed before our leadership made the decision to pull the bill from the House floor in the eleventh hour,” she said.

“Additionally, I am appalled by the abhorrent and childish behaviors from some of the leaders of the outside groups,” Ellmers said, referring to pro-life critics who accused her of betrayal and demanded Ellmers be defeated in her next Republican primary.

Cortney O'Brien, web editor of Townhall.com, replied, “I have to ask Rep. Ellmers: Since when is it ‘abhorrent’ to stand up for life? The efforts of pro-life organizations, through their tireless demonstrations and compassionate campaigns, have helped change hearts and minds and saved thousands of babies from abortion.”

Ellmers has had derogatory things to say about conservatives in the past. During a radio interview last March she called Laura Ingraham “small-minded” and “ignorant” for opposing a path to citizenship for millions of illegal immigrants. Prominent conservatives suggested she face a primary at that time, but most inside-the-Beltway organizations endorsed her for re-election.

The symbolic vote on the 20 weeks bill was the culmination of a long educational campaign by pro-life organizations that ran aground on the issue of rape.

When Congressman Trent Franks introduced the Pain Capable Unborn Child Protection Act in the House, it did not contain a rape exception. After a media kerfuffle, an exception for rape and incest was added by then-House Minority Leader Eric Cantor that required women to report the alleged abuse to law enforcement. It passed the House in 2013.

This year when Franks reintroduced the act, which would prohibit abortion on the grounds of fetal pain, it contained the new rape language.

Congress was scheduled to vote on the bill the morning of the March for Life until Ellmers, a North Carolina Republican, joined Indiana Republican Jackie Walorski and a handful of others in objecting to the reporting provision, and their actions led the Republican House leadership to delay the vote on the bill.

Although House members did not remove the reporting requirement, Sen. Lindsey Graham has promised to make it easier to obtain a late-term abortion by changing the statutory wording when he introduces it in the Senate.