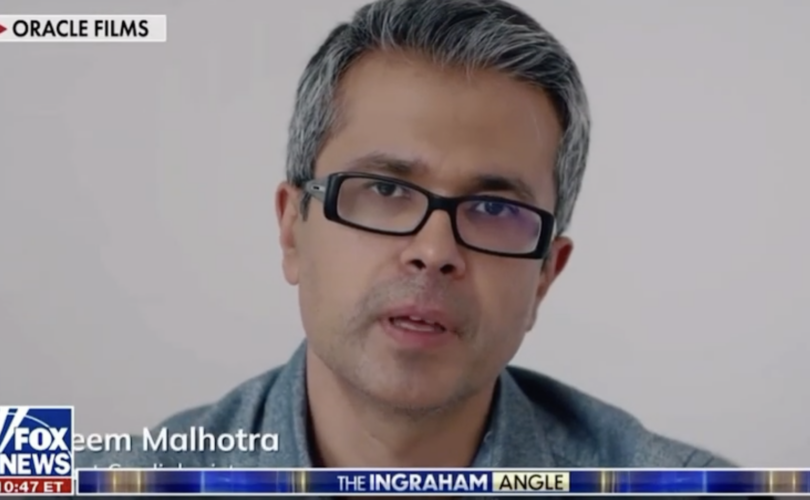 (LifeSiteNews) – A COVID-jabbed cardiologist is now calling for the suspension of the mRNA-based COVID-19 shots due to the “significant harm” they have caused, calling the situation a “global scandal.”

United Kingdom-based Dr. Aseem Malhotra spoke this week to Fox News Channel’s Laura Ingraham about his recent declaration that, “having been double-jabbed, being one of the first to take the Pfizer vaccine, I have, after several months critically appraising the data […] reluctantly concluded that this vaccine is not completely safe and has unprecedented harms, which leads me to conclude that it needs to be suspended until all the raw data has been released.”

Malhotra, who was suspended from Facebook for the above message, said he first started looking more closely at the issue when his father, in his 70s but otherwise “very fit and active,” died of an unexplained heart attack and was found to have “very severe narrowings of the coronary arteries.” In the following months, data came out indicating that the mRNA vaccines developed by Pfizer and Moderna “likely accelerates coronary artery disease.”

He then conducted his own review of the data and conversations with experts, and concluded that “unfortunately this particular vaccine has harms that are unprecedented, the efficacy is actually very, very poor […] what the conclusions are very clear, overwhelming, unequivocal evidence that the vaccine, these vaccines need to be suspended, paused, pending an inquiry.”

“When I looked at this data, what we find in absolute risk of harm, in general, when we’re talking about serious adverse events, so this is including myocarditis, but you know, anything that causes disability, hospitalization, this includes heart attacks and strokes, for example, that is at least one in 800,” he continued. “And that data, interestingly, comes from Pfizer’s own trial and Moderna’s own trial. This was published in the journal of Vaccine a few weeks ago. Eminent scientists were able to reanalyze some of the original trial data, and what they concluded, Laura, which is extraordinary, is that in the trial one was more likely to suffer a serious adverse event from the vaccine than one was to be hospitalized with COVID.”

“What that suggests is that the original rollout, what led to the approval by the regulator that that data suggested at the time, it was likely to cause more harm than good in most people,” he declared. “And that’s a smoking gun. That’s more than enough evidence for us to pause and stop the vaccine rollout.”

“I find it very difficult to believe that Pfizer senior executives and Pfizer scientists didn’t know when it was being rolled out, because they had access to the raw data, which we now know shows significant harm,” Malhotra said, calling it “perhaps the greatest miscarriage of medical science […] that we will witness in our lifetime.”

Malhotra is slated to present his findings to the English Parliament on Thursday.

Many harbor moral reservations about the use of aborted fetal cells in the COVID vaccines’ development, as well as grave concerns about the necessity and safety of the shots given the superiority of natural immunity, COVID’s low risk to most otherwise-healthy individuals, the vaccines’ failure to prevent infection, their accelerated development under former President Donald Trump’s Operation Warp Speed initiative giving them only a fraction of the evaluation and development time vaccines normally take, the lack of transparency from their manufacturers, and mounting evidence of serious adverse effects.

This March, it was found that 11,289 cases of pericarditis/myocarditis after COVID vaccination were reported to the U.S. government’s federal Vaccine Adverse Event Reporting System (VAERS) between January 1 and February 25 of this year, which was already 47% of the 24,177 reports for the same submitted in all of 2021. An April study out of Israel indicates that COVID infection alone cannot account for such cases, despite claims to the contrary.

Pfizer  initially tried to keep internal data from the vaccines from being released until 2076, but the information was forced to be released earlier this year. The disclosures’ revelations include reports of 158,893 serious adverse events after vaccination in dozens of countries around the world from December 1, 2020 to February 28, 2022, and data showing that of 270 “unique pregnancies” that were exposed to the company’s vaccine, “no outcome was provided for 238 pregnancies,” and that of the 32 remaining pregnancies with known outcomes, 28 resulted in fetal death.