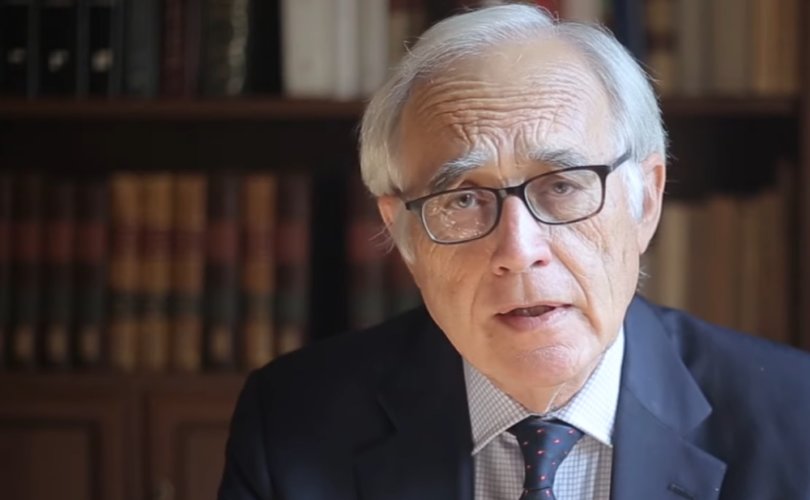 ROME, Italy, October 8, 2020 (LifeSiteNews) ― A leading Italian Catholic historian says that there is more and more evidence that Covid-19 was not only manufactured in a Chinese laboratory but it was released by the communists in an act of “biological warfare” as part of their “program for the future.”

In a recent video published by the Lepanto Foundation (watch video from 10:02 – 12:44), Professor Roberto declared that nobody should be surprised if the “ideological and psychological war” of communism has been followed by biological warfare, via a laboratory in China.

“Each day that passes, the doubts of the synthetic origins of the virus are vanishing increasingly,” he said.

“And why should we be surprised if this virus had its origins in Communist China, a country that still claims the ideals of Marx, Lenin, and Mao, making this their program for the future?”

“We have entered into the phase of biological warfare […].”

Mattei spoke earlier in his message, which opened the Jubilee Year of the 450th anniversary of the victory of Catholic forces over the Turks at the Battle of Lepanto, of the battles in which the Church has been plunged since then: the continuing damage of the French Revolution and the Bolshevik Revolution of 1917.

“The errors of communism have contaminated the entire world like a maleficent virus,” Mattei said.

“Those who think communism has become extinct with the collapse of the Soviet Union are committing a deadly error in judgement,” he continued.

Since the 1970s, following the directions of Antonio Gramsci and the Frankfurt School after the ideological war, communism has developed into a new type of war, a psychological war which, through the weapons of words and images, aims at striking at souls before bodies. And it insults the profound tendencies in man: his sentiments, his emotions.”

— Article continues below Petition —
PETITION: No to mandatory vaccination for the coronavirus
Show Petition Text
1082047 have signed the petition.
Let's get to 1100000!
Thank you for signing this petition!
Add your signature:
Show Petition Text

The professor warned that this cultural Marxism has entered even the Church herself.

“This war has penetrated inside the Church, since the Church is the enemy par excellence of the Revolution, is the place where souls are formed for battle,” Mattei said.

Mattei then suggested that it should not be surprising that the “ideological and physical virus” has been followed by “a biological virus, an enemy that seems to be the physical symbol, even if it is invisible in this process, of the cultural and moral poisoning of mankind.” Neither should be surprised if an “organized pandemic” has been “fabricated in a laboratory.”

Debate has raged for months about the origin of the Covid-19 coronavirus, which first began to appear in Wuhan, China in December, 2019. Chinese authorities placed the blame on an unhygienic seafood and poultry market in the city, and rumours flew about that the virus had spread to human beings via bats or pangolins, a species of anteater used in Chinese traditional medicine. However, in May the U.S. Secretary of State, Mike Pompeo stated that there was “enormous evidence” that the virus had in fact come from the Wuhan Institute of Virology.

Steven Mosher of the Population Institute, an American authority on China, is a strong proponent of the theory that the “Wuhan flu” originated in the Wuhan Institute of Virology. In an article he published in LifeSiteNews, Mosher identified China’s notorious “batwoman” Dr. Shi Zhengli as the inventor of Covid-19.

“Dr. Shi Zhengli […] was in the business of creating new and deadly coronaviruses,” Mosher wrote.

“Some of her work she published in scholarly journals, such as her 2008 article in the Journal of Virology. There she described how she and her team were taking harmless coronaviruses from horseshoe bats and then genetically engineering them to be able to infect human beings just like the original SARS virus does,” he continued.

“By 2013 she had isolated the bat coronavirus now known as RaTG-13 and was using it for Gain-of-Function research. […]  Using her secret bat coronavirus as the “backbone,” she had inserted a receptor binding domain (RBD) from another coronavirus to make it more infectious.

“The scientific name of the resulting chimera coronavirus is SARS-CoV-2, but it is known to the world—correctly–as the China Virus.”

Dr. Li-Meng Yan, a Chinese scientist who fled China and is currently in hiding in the United States, told Tucker Carlson last month that COVID-19 was created in a lab and that China’s Communist government released the “Frankenstein” virus “intentionally” to “make such harm.”