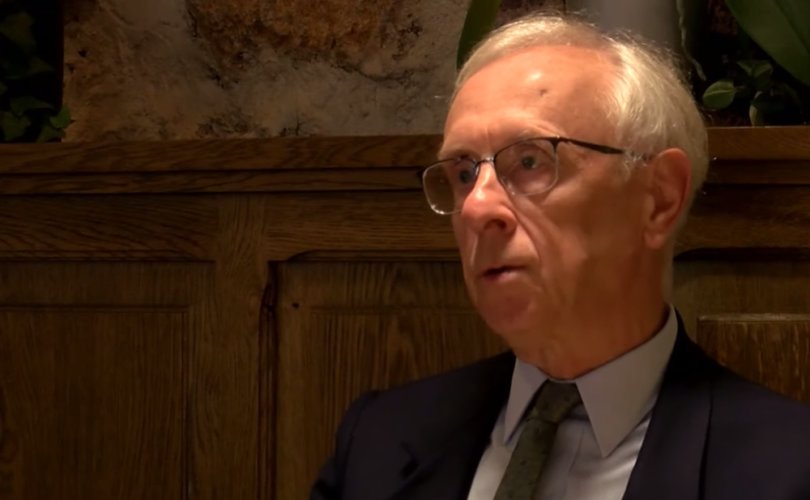 April 30, 2020 (LifeSiteNews) – A world-renowned political philosopher is raising the alarm that government authorities could be using the “health emergency” brought on by the coronavirus to establish a “permanent state of emergency” where personal freedoms enjoyed just a few weeks ago are simply erased.

Pierre Manent noted how authorities are using the “most primitive and brutal of measures” in response to COVID-19, namely “general confinement under police surveillance.”

Talking to French newspaper Le Figaro, Manent admitted that in an emergency “some unusual measures are unavoidable.” However, he cautioned that basing emergency measures solely on the “fragility of human health” could “provide the State with a permanent justification for a permanent state of emergency,” given the “permanent urgency” of health questions. His interview was published in English by First Things.

Manent, who has been called “perhaps the most thoughtful political philosopher writing today,”  teaches not only in France but also at Boston College in the United States. A follower of Aristotle, Alexis de Tocqueville, and Leo Strauss, in his work he has been critical of many modern developments, for instance the European Union. Manent converted to Catholicism at a young age.

The decisions of governments across the globe to essentially prohibit proper funerals of loved ones, Manent explained, necessarily follow the “erasure of religion.”

He asked, “Have you noticed that, on the long list of authorized reasons for leaving one’s domicile, the ‘needs of pets’ were not forgotten, but there was no provision for those who might wish to go to a place of worship?”

“Those who govern us are honorable people who are doing their best to overcome a serious crisis,” Manent answered his own question. “But they have not noticed the enormous, and inadmissible abuse of power implicit in some of their decisions. How is this possible?”

“Innocent or benign missteps are punished with exorbitant fines. We are forbidden from leaving our residences without passports, but the reestablishment of national borders is still considered a mortal sin,” he said.

He pointed out that recently, “we note the return of the least likeable features of our State.” Nevertheless, even though the state had taken away many freedoms amid the coronavirus pandemic, Manent said, “we gave ourselves over to the State long ago, according it sovereignty over our lives.”

Prior to political developments in recent months, people’s lives had already been heavily influenced, often subtly, by the power of the state, Manent explained, specifically referring to freedom of speech.

“The spontaneity of public speech has been subjected to a kind of prior censorship, which in effect has excluded legitimate debate on most of the important questions of our common life, or even of our personal lives,” he said.

“Whether the question is migration or relations between the sexes and related social questions, an ideology common to society and the State dictates what is permitted and prohibited, which is the same as what is honorable and shameful, noble and vile. In a word, we have altogether internalized the principle of a code of speech and expression, which it is considered suspect to resist.”

These prior developments put people in an impossible situation in the face of government measures amid the coronavirus pandemic. “Our world is full of victims who, in a voice that is at once whining and threatening, claim to be wounded” by free speech.

“They see in the grammatical rules governing gender an offense to all women and find homophobic insult in schoolboy profanity. How can we now oppose the State as guardian of rights while we beg it to intrude into our ever-wounded personal lives?”

According to the French philosopher, the nation has already been “abandoned, discredited, and delegitimized for two generations.” Nevertheless, he said, the “European Union is just as weak as the nations that make it up.”

Manent called the current crisis “the end of the European fantasy.”

At the same time, he identified in it an opportunity to “rediscover a certain affection for what we are,” as well as to “gather strength in drawing upon our national character and patiently nourish our own resources—moral and spiritual resources as well as military and economic resources.”

He cautioned that this endeavour would only be salutary if accompanied by an awareness of the very real weakness “into which we have let ourselves slide.”

Explicitly mentioned was the dependence of France on China, which is also true of other European countries, as well as the United States. According to Manent, that dependence was “willed” by governments in the Western world.

An opinion piece in the Washington Post pointed out in March that American “dependence on China is not just for medicine and devices to deal with this pandemic but also for technology that is critical to our long-term economic and security interests.”

“The current pandemic has exposed the fact that we are dependent on China for everything from iPhones and computers to clothing and footwear—supply chains that have been disrupted by the coronavirus outbreak,” wrote Marc A. Thiessen.

“It’s one thing to depend on China for cheap T-shirts and sneakers,” he argued. “It’s another to depend on a brutal communist dictatorship for life-saving drugs and the communications infrastructure that will undergird the 21st-century economy.”