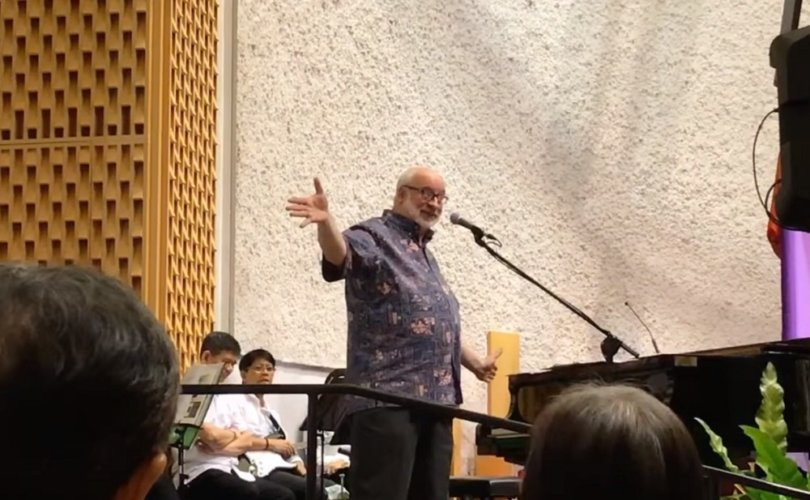 August 25, 2020 (LifeSiteNews) — David Haas, a composer of hymns whose songs have been sung in Catholic parishes across America, has been stripped of an honorary doctorate from a west coast Catholic university in light of recent sexual misconduct accusations made against him.

The 63-year-old Haas is best known for his modernist hymns “Blest Are They,” “You Are Mine,” and “We Are Called.”

The official newspaper of the Archdiocese of Portland, the Catholic Sentinel, first reported on August 20 that the University of Portland made the decision to strip Haas of his Honorary Doctor of Humane Letters, which was given to him in 2015.

According to the Sentinel report, Haas’s honorary doctorate was rescinded after the university reviewed the actions being taken against him by the Archdiocese of St. Paul and Minneapolis.

In June, the archdiocese, which serves as Haas’s local diocese, announced in a statement that it had received “two reports” in 2018  from another diocese that “David Haas acted inappropriately with two adult women at an event in another state.”

The statement also says the archdiocese received a complaint against Haas in 1987 for making “unwanted sexual advances toward a young adult woman.”

In both instances, the archdiocese said Haas “denied that he engaged in inappropriate conduct.”

A spokesman for the University of Portland spoke with LifeSiteNews to confirm the decision to strip Haas of his honorary degree, saying it happened last month.

“We made that decision this summer. The decision was made in mid-July,” University of Portland vice president for marketing and communications Michael Lewellen told LifeSiteNews.

Lewellen also told LifeSiteNews that they did not issue a press release regarding the rescinding of Haas’s honorary degree.

In August, Saint John’s Abbey and Saint John’s University rescinded a Pax Christi Award given to Haas in light of his sexual misconduct allegations.

“We made the determination, based on the information available to us, that Mr. Haas’s conduct is not consistent with the purpose of the Pax Christi Award, which serves to honor those whose lives exemplify Benedictine ideals,” read a statement from the Minnesota-based College of Saint Benedict and Saint John’s University regarding their decision to strip Haas of the award.

In early June, Haas’s publisher, GIA Publications, said it learned of allegations of sexual misconduct by Haas earlier in the year and that because of this, GIA had suspended its sponsorship and publishing relationship with him since January.

GIA made the announcement only one day before the Archdiocese of St. Paul and Minneapolis issued its statement on Haas.

“New allegations of sexually abusive conduct by Mr. Haas continue to be reported. We take these reports seriously. GIA Publications supports and stands with victims,” wrote GIA in a statement.

According to Into Account, a group that provides support for survivors of sexual abuse within “Christian contexts,” Haas “targeted multiple women using techniques that abuse prevention experts identify as grooming, to create conditions in which women felt obligated to perform sexual favors in exchange for professional opportunities.”

In July, the Archdiocese of Los Angeles asked all of its parishes, schools, and ministries to forgo the use of hymns written by Haas.

Haas has been a regular fixture at the annual Los Angeles Religious Education Conference, which has a reputation for hosting unorthodox, pro-LGBT speakers and promoting liturgical novelties.

In 2019, Haas composed a chant to celebrate homosexuality for Pride Month and posted it on his Facebook page but then later deleted it.

Haas told LifeSiteNews at the time that it had “nothing to do with the issue of same-sex marriage,” and was meant as a “gift” to those who “minister to folks in the LGBTQ Community, and to many of my sisters and brothers who are part of the LGBTQ community as they celebrate Pride Month.”

Dr. Peter Kwasniewski, a composer, author, and frequent LifeSite contributor, told LifeSiteNews at the time that Haas’s chant text was “scurrilous and blasphemous.”