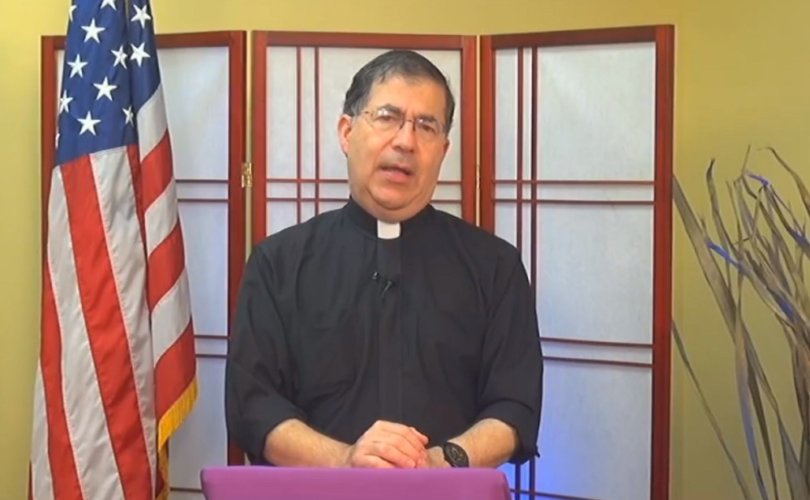 TITUSVILLE, Florida, July 28, 2020 (LifeSiteNews) — National Director of Priests for Life Fr. Frank Pavone quietly stepped down a month ago from his official roles with two coalitions organized as part of President Donald Trump’s re-election campaign at the request of the Vatican’s Congregation for the Clergy.

However, even though he is no longer on the advisory board of Catholics for Trump or co-chair of Pro-Life Voices for Trump, Pavone is still wholly, but unofficially, involved in the Trump campaign as a member of both coalitions, and informally advises them, he told LifeSiteNews.

“I’m not an official board member. I do not have a title. I’m a citizen and I’m a priest who’s doing what I believe what every Christian needs to do,” he told LifeSiteNews.

“Technically, I’m following the letter of the law,” he added. “Morally, there’s only one thing I can do, which is to advocate for the President.”

Pavone also took to Twitter on Monday to blast unspecified media for “fake news” two days after Catholic News Agency reported that he had resigned from his advisory roles with the coalitions:

So sick of the #fakenews coverage even within #Catholic Media.

I help the Trump Campaign in an unofficial capacity.

As an obedient priest, I follow Church law not to have an official title in the campaign.

But media report on it as if I’m distancing myself from Trump.

Pavone told LifeSiteNews that his official roles in the Trump campaign came up during his discussions with the Congregation for the Clergy about his request to be transferred from the Diocese of Amarillo, Texas, to another diocese where the bishop is more sympathetic to his work.

That transfer was completed in November, but his new bishop has yet to publicly announce that Pavone, a self-described “hot potato,” is under his authority.

In 2005, Pavone moved from New York to be incardinated in the Amarillo diocese, where he planned to start a community of pro-life priests, plans that did not come to fruition, CNA reported.

In 2008, Zurek became bishop of Amarillo, and in 2011 he ordered Pavone to return to the diocese and suspended him. Pavone appealed to the Vatican, which in 2012 declared that he was not suspended.

Discord between the two men erupted anew in November 2016 when Pavone controversially live-streamed two Facebook videos in which he placed the body of an aborted baby on what appeared to be an altar while urging people to vote for Trump.

Zurek condemned Pavone’s action as “against the dignity of human life” and “a desecration of the altar,” and announced he was opening an investigation.

The conclusions of the investigation have not been made public and Pavone told CNA he has been “cleared of the past complaints/investigations/disciplinary actions by the bishop of Amarillo. That chapter is closed.”

Although Pavone is under the authority of a new bishop, he remains incardinated in Amarillo, and “is a priest in good standing,” he told LifeSiteNews.

He said he was not surprised that the Vatican told him to step down from his formal roles in the Trump campaign.

“I knew full well the canon law of the Church,” he told LifeSiteNews. “I was taking advantage of the fact that there is an exemption clause.”

Pavone was referring to Canon 287(2), which states that priests “are not to play an active role in political parties … unless, in the judgment of the competent ecclesiastical authority, this is required for the defense of the rights of the Church or to promote the common good.”

Given that any effort to prevent the Democrats from winning the November election is clearly a case of promoting the common good, Pavone “specifically” asked for an “exemption under that clause,” he said, but the Congregation did not grant it.

Dr. Joseph Shaw, philosophy professor at Oxford University and frequent blogger at LifeSiteNews, said the Catholic Church’s thinking is that the “temporal sphere belongs to the laity.”

This “does not mean that we should ignore Christian principles, but simply that applying them in the temporal sphere is a lay role. Bishops and priests who do undertake this are not exercising a clerical role when they do so,” he told LifeSiteNews in an email.

One of the dangers of allowing priests and bishops to take up political roles in modern times is that “because lay Catholic leadership has been so weakened by the loss of Catholic states and other lay institutions we could end up looking at the clergy as the leaders of the Church. They are not: their authority is only in the spiritual realm,” said Shaw.

“Matters of politics, economics, health, education, and military matters all come under moral principles about which the Church has the authority to teach, but these principles don’t get us very far. To achieve the goods proper to those disciplines requires the exercise of prudence about temporal goods which is a lay vocation, even if sometimes exercised by clerics,” he added.

“In this context it would have been strange for Fr. Pavone to have been allowed to keep his place on these committees, and it is worth noting that it is clerics sympathetic with the political left who have more often been subject to censure on this matter,” Shaw said.

For his part, Pavone says he is focused on preventing Democrat Joe Biden from becoming president, which he regards as a moral obligation.

“From when I wake up and when I go to bed in the next 99 days is going to be about this election,” he told LifeSiteNews. “I’m going to be advocating for the President and the Republican ticket.”

He is unapologetic about his wholehearted endorsement of Trump in spite of the President’s complicated personal life and support for the LGBTQ agenda, arguing that Trump has “protected our freedom not to be associated with the LGBTQXYZ nonsense.”

“There is no such thing where any of your options is a perfect candidate,” he said.

“But it would be a moral blindness of the highest degree to somehow think that there’s any other choice than to vote for President Trump.”

He noted that the Vatican requested he step down from his official roles a month ago and he complied instantly.

Pavone said he “has a theory” about why this has come to the media’s attention now, but he did not elaborate.