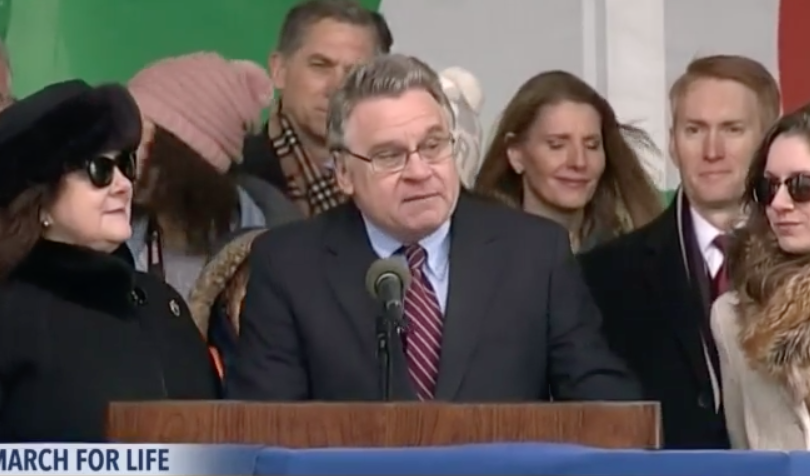 Chris Smith speaks at the 2017 March for Life RallyC-SPAN

WASHINGTON, DC, January 30, 2017 (LifeSiteNews) — After a week of pro-life political victories that would have been unthinkable under the Obama administration, the House of Representatives is ready to go after Planned Parenthood, Chris Smith told the March for Life.

“This is the turning point for the right-to-life movement,” declared the New Jersey Republican Congressman, who is co-chair of the bipartisan Congressional Pro-Life Caucus.

Smith expressed profound thanks that President Trump and Vice President Pence have “already accomplished amazing things,” and praised the Republican-dominated House of Representatives.

“I’ve been in Congress since 1981. They are the most effective, articulate, and compassionate members of Congress that we have ever seen,” said Smith. “It is all about teamwork.”

Smith summarized for the cheering crowd of hundreds of thousands at the March for Life the remarkable events of the past week.

It began with President Trump reinstating the Mexico City Policy, which bars U.S. funding from groups that promote or provide abortions in other countries.

But not only did Trump reinstate the policy, he expanded it, so it “will protect more babies overseas from the violence of abortion,” Smith stated.

“So thank you President Trump for that leadership.”

And on Tuesday, “under the extraordinary leadership of [House Leader] Paul Ryan and the Republican leadership in the House, H.R. 7 was passed,” added Smith.

Introduced by Smith, H.R. 7 makes permanent the Hyde Amendment, which prohibits federal money from being used to fund abortions through Medicaid.

The White House subsequently released a statement that “the Administration strongly supports H.R. 7. … If the President were presented with H.R. 7 in its present form, he would sign the bill.”

“The Hyde Amendment has saved two million babies’ lives,” Smith told the crowd. “The empirical data is clear so what you have done all these years has made an enormous difference.”

“Next up will be legislation to protect pain-capable unborn babies, authored by Trent Franks of Arizona,” Smith said.

“And then defunding Planned Parenthood,” he added, to a roar of cheers and applause.

“Planned Parenthood destroys an unborn child every two minutes, and has killed over seven million babies since 1973,” Smith said.

Smith referred to the crucial work of the Center for Medical Progress, which began releasing incriminating undercover videos in July 2015, which documented Planned Parenthood personnel, among other things, negotiating to sell baby parts, a criminal offence.

The game-changing videos have given state and federal legislatures leverage in efforts to defund the abortion giant.

“The most dangerous place in the world today for a child is in a Planned Parenthood clinic.”

The March for Life is the largest annual civil rights event in America, and marks the 1973 Roe v. Wade Supreme Court decision that legalized abortion in the US.

“You know, ex-President Barack Obama, the abortion president, did serious harm,” Smith told the crowd. “But no human rights abuse need be forever. You and I are part of the greatest human rights struggle on earth.”

He contended that if people knew what abortion was, they would reject it.

“Growing numbers of Americans are indeed shocked to learn that the methods of abortion include dismemberment of a child’s body, or their literal starvation through RU-486,” Smith told the crowd.

Smith concluded: “Someday future generations of Americans will look back and wonder how and why such a seemingly enlightened society could have permitted the extermination by abortion of over 60 million babies.”

“But history and the survivors will note that you stood your ground,” he told the marchers.