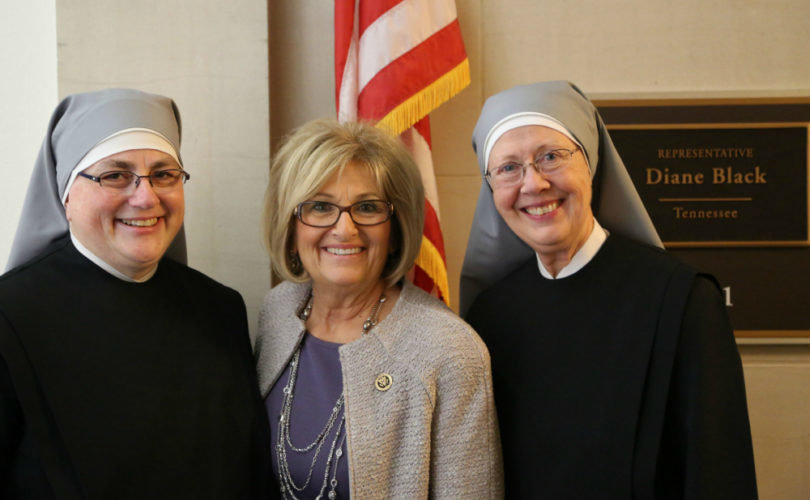 WASHINGTON, D.C., January 11, 2016 (LifeSiteNews) — A leading pro-life House Republican told LifeSiteNews today that the fight against the federal government's abortifacient and contraceptive mandate “is not a political issue,” but instead one with important Constitutional implications.

On Monday, 207 Members of Congress signed an amicus brief to the U.S. Supreme Court, urging justices to protect the religious liberty of dozens of groups fighting the HHS mandate, which requires coverage that dozens of groups say violate their religious beliefs. Seven of those cases have been consolidated into one that will be argued in front of the Court in March.

One of the four Members of Congress leading the charge for the Little Sisters of the Poor, Priests for Life, and the other groups is Rep. Diane Black, R-TN, who gave an exclusive interview with LifeSiteNews about the brief this morning.

LifeSiteNews: More than 200 Members of Congress have signed onto this amicus brief — a rare event. Why are so many interested in the Little Sisters of the Poor and the other religious groups fighting the HHS Mandate?

Rep. Diane Black: Members of Congress understand this is a pivotal moment for religious liberty. Obamacare’s HHS mandate sets up an impossible choice for countless ministries and faith-based charities: deny their deeply held beliefs and provide coverage for drugs they deem to be morally objectionable, or face crippling fines that could force them to close their doors. Meanwhile, while major corporations like Exxon Mobile, Chevron, and IBM enjoy an exemption from this mandate, the plaintiffs in this case have been denied true relief from the law’s onerous demands.

The stakes could not be higher. Allowing the HHS mandate to continue unabated would deny the right to religious freedom provided under our Constitution and could effectively be the end of many worthwhile nonprofits and ministries who simply will not be able to afford the financial penalties the heavy-handed Obama Administration levies against them.

I am grateful for the two Democratic Members of Congress, Daniel Lipinski and Collin Peterson, who made this a bipartisan amicus brief, however it is disappointing that more of their colleagues across the aisle did not join in this effort. Protecting religious freedom is not a political issue, it is a Constitutional issue.

LSN: The Obama administration says it has a compelling interest in forcing elderly nuns to be involved in insuring abortifacients and contraceptives — even as businesses are exempted. Is this a case of cronyism, where special interests are exempted from a very burdensome mandate, and why do you think the administration is so keen on going after nuns and leaving businesses exempt?

Rep. Black: Cronyism is alive and well in the Obama Administration. While I am pleased to see anyone granted relief from this oppressive mandate, it makes no sense that a company like Exxon Mobil would receive an exemption while organizations like Little Sisters of the Poor and Priests for Life would not. Clearly this is a case of the Obama Administration wanting to know ‘What can you do for me?’

While Little Sisters of the Poor provides compassionate care to over 30,000 of the elderly poor in 31 countries across the world, apparently they don’t serve the interests of the Obama Administration enough to warrant any kind of relief from this law.

LSN: Your brief focuses on the 1993 RFRA. Why are you using RFRA instead of the First Amendment to argue your position?

Rep. Black: Our amicus brief cites the First Amendment to the Constitution, the Religious Freedom Restoration Act, and relevant case law to expose the illegalities of Obamacare’s HHS mandate. RFRA is used in particular because the law – passed with bipartisan support less than 23 years ago – speaks specifically to the infringement of religious freedom that is endured by the plaintiffs in this case. That law notes that “Government shall not substantially burden a person’s exercise of religion even if the burden results from a rule of general applicability,” unless the government can “demonstrate that application of the burden to the person (1) is in furtherance of a compelling governmental interest; and (2) is the least restrictive means of furthering” that interest.”

Obamacare’s HHS mandate is a violation of RFRA if there ever was one. Forcing faith-based charities to provide coverage for morally objectionable drugs does not serve a compelling governmental interest. What’s more, the way the HHS mandate is enforced asks courts to weigh the verity of a claimant’s religious beliefs – a practice that both RFRA and past Supreme Court cases have rejected.

LSN: Hobby Lobby won a partial victory for businesses in front of the Supreme Court; do you think the Sisters will also win? And what level of victory or loss — complete, partial, specific or broad, etc. — do you expect, and why?

Rep. Black: As our amicus brief makes clear, any fair interpretation of the law will compel the court to rule in favor of the Little Sisters of the Poor and the other plaintiffs. While the Hobby Lobby vs. Burwell decision offered a narrow victory for religious freedom, it failed to fully answer the many questions and concerns that surround this mandate. It is our hope that the court will issue a broad decision that protects the rights of ministries and charities like Little Sisters of the Poor. If the court fails to uphold religious freedom in its decision, Congress should also be prepared to act. That is why I am the author of H.R. 940, the Health Care Conscience Rights Act – legislation to provide full exemption from this oppressive mandate once and for all.

LSN: On the basis of principle, do you believe the federal government should be involved in promoting contraceptives and abortifacients at all, and if so, how would you change existing policy to respect religious liberty?

Rep. Black: The federal government has no business compelling anyone to provide, pay for, or refer abortifacients which many individuals, myself included, believe amounts to the taking of an unborn life. Using taxpayer dollars to prop up the use of abortion inducing drugs is an affront to the conscience rights of millions of Americans. It is time that we return to a point of respecting and upholding religious freedom in this nation and it is my prayer that this forthcoming Supreme Court ruling will usher that in.