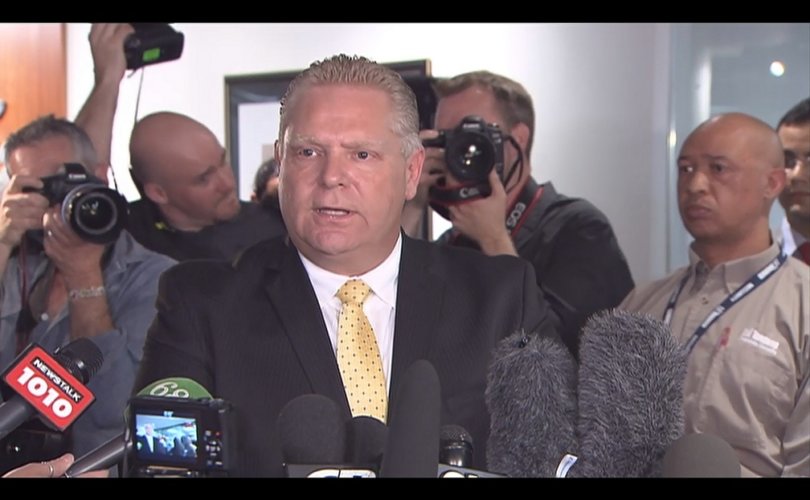 “I can’t stand the nanny state, when the government goes and starts breathing down your back, you know, forcing the ideology that they believe is right,” Ford said.

“See, the government, Andrew, always believes they’re smarter than all of us.”

Lawton pressed Ford to elaborate on an earlier statement that “the sex-ed curriculum should be about facts, not teaching Liberal ideology.”

Could Ford provide “one example in that curriculum where you think ‘Liberal ideology’ has hijacked ‘facts?’” asked Lawton.

“Can your listeners and yourself tell me what the six genders are?” responded Ford.

Granic Allen released the video days after Queen’s Park rose last week with the Ford government’s September repeal of the 2015 Liberal sex-ed curriculum still under relentless and well-publicized attacks by the NDP and activists.

Indeed, six families announced in early August they are launching a human rights complaint to stop repeal of the Liberal sex-ed curriculum, which — as Ford points out — teaches there are six genders rather than two sexes.

The lead applicant in the Ontario Human Rights Tribunal complaint is an 11-year-old transgender child, and students involved in the case are all under age 13.

Meanwhile, the Elementary Teachers’ Federation of Ontario has said it will defend any teacher who teaches the Liberal sex-ed in the fall, and NDP leader Andrea Horwath has warned repeatedly that repealing the Liberal sex-ed will endanger children.

And the Conservative government itself cast doubt on its commitment to repeal right at the start of its tenure. Education Minister Lisa Thompson replied to NDP attacks that some parts of the curriculum, including gender theory and homosexuality, would be retained.

Granic Allen is adamant that gender identity theory must be scrapped along with the rest of the curriculum and urges parents to contact Ford to make sure this happens.

“Doug Ford is right; gender identity theory is liberal ideology,” she wrote in an email to supporters.

“Most would agree that the unscientific gender identity theory is among the worst parts of Wynne’s curriculum.”

Or, as PAFE’s video puts it: “Repeal means repeal.”

PAFE has also launched a petition drive to support repeal. MPPs will present these petitions in the legislature when it resumes sitting on September 24.